The dedication of the book says it all. “This book is dedicated to the lonely souls haunting New York City.” Pawn Shop was a fully funded Kickstarter project in 2012 that was recently released as a complete graphic novel in February of this year. Inside writer Joey Esposito explores the interconnectedness of people and the ways in which those people can affect those around them.

I have to be honest. I read the first two pages of this about a week ago and put it down. Not because it was bad or poorly written, but because it is such a kick in the heart that you almost have to be prepared for it. I’ve a soft spot for old people reflecting on their spent lives (and dogs behind chain-link, darn you Sarah Mclachlan), and the first chapter focuses on just that.

Harold is a widower, and sees his past mistakes in every aspect of the city. He takes a touristy tour of New York and all he sees are the places where he and his wife had shared moments. Instead of solace in the memory of those times, each reminds him that he waited too long to propose, that he wasted years in which they could have been together.

The second chapter is focused on Arthur, a man at the opposite end of his life, a story of unrequited love and the fear of “jumping the tracks” in your everyday life. Arthur is a hospice nurse, looking after Paul, a comatose man living with his sister. Arthur is in a state of arrested development, still loves his favorite action figures and shares that love with Paul, but is paralyzed into inaction because of a childhood coincidence. He sees how his heroes have fallen, and learn how to see whom his real heroes are.

Jen is the subject of chapter 3, a girl who has had a rough go, who is involved with the wrong type of guy and has nowhere left to go but up. Hers’ is a story of redemption and the small steps people have to take in order to change their lives.

The book closes out with Samantha, Paul’s sister, trapped by her circumstances, drowning in debt, trying to find the thing that will make it easier for her to keep up the daily struggle. She’s trapped in her present by her past, and shows that sometimes we must make hard choices in order to live with any degree of joy.

Esposito (Captain Ultimate, Footprints) has crafted a beautiful story. He has brought together the disparate elements of four separate lives and shows the connections between them, however tenuous or brief. (It was definitely a Pulp Fiction feel.) Esposito has a storytelling style that pulls you directly into the lives of his characters. (Like I said, I made it two pages…)

Sean Von Gorman (Liberator, Fubar) arted this up for us. He used watercolors, which helped to soften the sometimes harsh themes that Esposito is pushing. Von Gorman uses line with a fluidity that works with the watercolor medium, as well as grounding the work and making it seem kind of nostalgic, which this book completely is.

There’s been a saying that’s been going around, one of those memes that you most often glance at and forget when you see it on Facebook or Twitter, but for this I think it’s an apt one. “Remember that everyone you meet is going through battle.” You don’t always know and can’t always tell, but each person you meet is in the midst of some kind of hardship in his or her life. Esposito and Von Gorman have put together a beautiful book, one that perfectly illustrates that saying, and how the littlest things can make the change for someone you bump into on the sidewalk outside of a Pawn Shop.

Click Image to Purchase “Pawn Shop” and Much More From Joey Esposito: 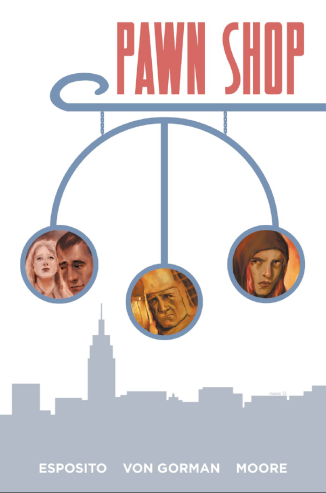