New York City was more than just a location in the previous runs of Daredevil; the city itself was a supporting character in many ways. It provided a lush, complex environment that often insinuated its way into the narrative much as it does in the Spider-Man mythology. There is a segment, a large segment of Marvel history that belongs to New York, both in the comic books and in reality. New York provides much more than an empty canvas upon which these amazing characters are brought to life, in many ways it enlivens them. As you have probably ascertained by now, I love New York. I love stories based in New York, the city is a catalyst for drama. So when I first heard that Waid, Samnee and company were pulling up the tent stakes on the Daredevil camp and moving the story 3000 miles across the country to San Francisco, I must admit I felt a tiny bit of the magic that made this series so great was going to dissipate. However, after reading this first issue, I am very happy to say that my fears were completely unfounded. Daredevil, especially this Daredevil works wonderfully in this new location, in fact there is a sense of discovery that Waid and perhaps to an even greater degree, Chris Samnee have injected into the book by allowing us to experience the move with Matt and his colleagues.

The issue opens with the feel of a police procedural as Matt is assisting the local authorities on a kidnapping case. The fact that Matt’s secret identity is out works extremely well in this opening scene, it allows him to use his powers in the role of a crime scene investigator extraordinaire. He analyzes the evidence to a degree that no other expert could thus obtaining clues and leads that make short work of locating the missing child but, finding her is just the beginning of Daredevil’s foray into San Francisco. The Man without Fear soon finds himself being pursued across very unfamiliar terrain with the added disadvantage of toting a small child, fortunately for both of them; he is not The Man without Help. Daredevil is assisted by Kirsten McDuffie, his colleague and law partner who made the journey west with him. McDuffie provides important GPS information and other pertinent data via a comm system. Seeing Matt rely on others is still somewhat alien but Waid has made the character much less introverted than other incarnations, in fact the move to the west coast feels exactly right for this Daredevil. He is not as dark as the Miller or even the Bendis Daredevil but, that’s okay. There is plenty of room for this lighter version of the character, especially with stories this good.

The story opens at an incredibly fast pace, the action is swift with a kinetic energy that runs through the entire issue. The narrative is complex and meticulously detailed without being wordy or relying on excessive exposition and backstory. This is a great spot for new readers to join the fun and excitement of one of Marvel Now’s most consistently entertaining books. That is not to say that it doesn’t continue the plot from the previous run because it is very definitely a continuation of those events, however it is also clearly a new chapter in that overarching saga. For instance, Foggy’s story is an extremely viable plot thread that is obviously going to be dealt with in the very near future.

Artistically, Chris Samnee really delivers on this issue. He completely transports us from New York to San Francisco via his detailed imagery and spot on rendering of local landmarks. His singular style has been a benchmark for this series since he became the regular artist or co-storyteller as he is so accurately credited. Samnee’s stylized anatomy and dynamic character designs have re-defined this title and this character just as much as Waid’s brilliant writing. Javier Rodriguez’s colors are the perfect element to tie this series to the previous one. His vibrant palette provides an air of familiarity to the new setting and allows us to feel a sense of continuity. This is truly one of those once-in-a-lifetime collaborations that serve to define an era in a character’s history. This creative team has combined talents to bring one of the greatest comic book characters of all time back to prominence. Certainly this is a more buoyant take on Daredevil than we have seen in some time but that fact is more refreshing than disappointing. One less dark, brooding and self-obsessed super hero is not a bad thing; there will always be room for great stories from both ends of the tonal and emotional spectrums.

Daredevil #1 is an unmitigated success. All New Marvel Now has certainly had more hits than misses since it began a few months back and this book is a prime example of how they are doing it; great stories featuring much loved characters and dynamic artwork. It’s a formula that has worked for years and been proven much more effective than die-cut, glow in the dark, foil embossed and even 3D covers. No gimmick can replace fundamentally well-crafted narratives, time tested franchises and visually stunning artwork and this book checks all those boxes. If you missed out on Waid’s first run don’t make that same mistakes twice. This is a fundamentally great comic book. (5/5) 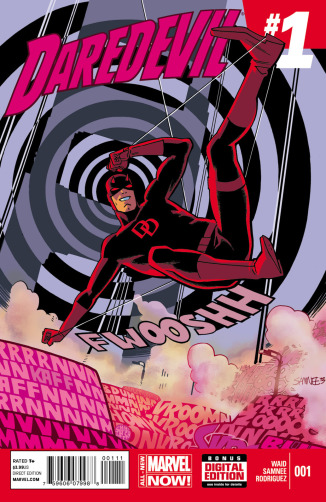