Skinner Sweet and Pearl Jones, the undead stars or Scott Snyder and Rafael Albuquerque’s epic horror story American Vampire, are back after an extended hiatus and having just read the first issue of the second cycle, I can tell you it is worth the wait. The creative collaborators certainly have an undeniable and readily recognizable style however they have managed to bring a feeling of newness to the title, both in the characters and the premise. Fans of the original run have a lot to be happy about in these pages; first of all the return of Pearl Jones who, in all her unshakable strength still succeeds at retaining that spark of humanity that transversely allows her to be a staunch advocate for “good guy” vampires.  In this inaugural issue she appears a bit rougher around the edges and a bit further from the Hollywood starlet of her past but still no less a force to be reckoned with as she wields her shot gun in protection of May, a persecuted young vampire girl who finds Pearl and her hidden sanctuary for wayward vamps just in time to save her from a pursuing horde. Then there is Skinner Sweet, resident rebel, biker bad ass and all around nasty character. Skinner has traded in his horse for a chopper but held onto that surly meanness that has made him so strangely endearing to readers of this series. He is still playing by his own rules as he roams the highways of the desert in search of that undefinable thing that will slake his thirst and end his restlessness.

These are great characters, of course Snyder is no stranger to great characters, whether they are his own, like Pearl and Skinner and the cast of The Wake, his other Vertigo title which you should also be reading, or iconic heroes like Batman and Superman, he brings out the humanity and the heart in these characters allowing them to live in ways that we have perhaps not seen before or even consider until we read Snyder’s innovative stories. He is able to re-define existing characters in such a way that they become his own creations, part of a lush, complex tapestry that spans genres, universes and defies classification.

This issue begins in the Mexican territory of Arizona, 1811. A group of Native Americans are awaiting the return of a fellow tribesman during an unseasonable snow storm. The rider’s head returns sans body upon a headless horse.  Such powerful imagery sets the tone for what follows and you can bet alludes to something much bigger and far darker to come as the narrative then moves forward in time to 1965, Kansas. Snyder and Albuquerque have created a world unto itself in American Vampire as well as an enduring mythology that is complex and detailed filled with characters that are themselves complex and detailed. There is a kind of timelessness to the look of the series and to the narrative, at its heart this is a character driven drama with supernatural horror tropes but the feelings and emotions that make these characters so relatable and human. The newly introduced character, May, in this issue is a perfect example of the melding of the supernatural and human elements. She is a vampire child, however while she maintains façade of innocence, she is a creature of potentially great evil. Her ambiguous utterance of “The Gray Trader” is oddly creepy and perplexing, a delicious riddle to be unraveled as the plot unfolds. This kind of paradoxical potentiality is one of the defining characteristics of this series and just one of a multitude of reasons why the story is so engrossing and inventive.

Rafael Albuquerque has created some of the most emotionally charged imagery in comic books today. His work conveys a sense of urgency while maintaining meticulous attention to detail. He keeps the imagery moving and alive, letting the story undulate across the pages. This style works extremely well with Snyder’s narrative here in American Vampire. Albuquerque’s character designs reflect the influence of the period in which they are set while bringing something ethereal to the overall appearance; there is a certain look to the eyes of his characters that speaks to an otherworldliness of origin even beyond the obvious vampiric element. His work is versatile yet distinguishable; he has an indelible style that he brings to every book he works on. I love his work here as well as on Animal Man, there is an undeniable energy to his art and it carries over into his storytelling approach making the narrative come alive and move from page to page, spilling from panel to panel. He is the perfect artist for this book.

American Vampire: Second Cycle is a perfect spot for new readers to discover these characters and this world. If you haven’t been following the story so far, don’t let that keep you from one of the best books on the racks today. Scott Snyder very adroitly fills new readers in without rehashing past events in a laundry list of exposition. Instead he uncovers gems of backstory when necessary thus bringing the newly initiated up to speed. This promises to be an exciting continuation of the previous series and an opportunity to catch up with some old fiends, ahem I mean, friends. So grab your crucifix and start reading, this is great stuff. (5/5) 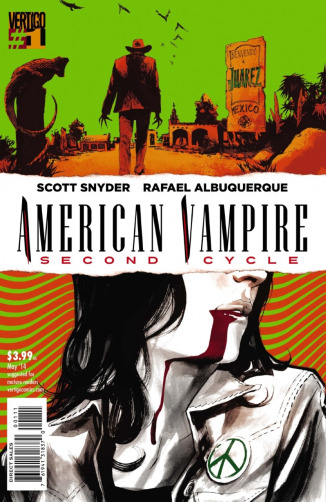