Written by Kevin J. Anderson
From a Story and lyrics by Neil Peart
Illustrated by Nick Robles
Lettering by Ed Dukeshire

“A single person in a perfect world is little more than an identical grain of sand or a tiny pebble alongside the road. Yet, if a grain of sand got into the eye, or a sharp pebble in a shoe, it could cause tremendous problems.” Owen Hardy is that grain of sand or sharp pebble. Welcome to the perfectly timed future of Clockwork Angels, released this week from Boom Studios.

Boom Studios throws it’s hat in the ring of wrangling up great seasoned creators with the release this week of Clockwork Angels written by Kevin J. Anderson. (Tales of the Jedi, Starjammers) Anderson has not only worked in the comic industry but has a long list of novels, including a popular run of Star Wars titles. Here he has been tapped to adapt (sometimes the rhymes come unbidden, and are too good to take out) a novel he wrote based on Rush’s 2012 album Clockwork Angels. Anderson is a longtime friend of Rush drummer Neil Peart, and worked with him on both the novel and the comic.

It is the story of Owen Hardy, assistant manager of an apple orchard in the town of Barrel Harbor, the quaintest and most perfect little village you could imagine. Everything is on time in this world, controlled by The Watchmaker, an omniscient, unknowable man who times even the rain precisely in his country of Albion. Owen is a dreamer and imagines the worlds outside past the edges of his little town, hoping to one day reach them.

But what are the Clockwork Angels, you ask. We only see them in a glimpse, one corner of one panel, but they will play an important role. They are the mouthpieces for the Watchmaker, a pair of finely crafted animatronic angels that dispense the words of the overlord to the masses. They are symbolic of the government, and in this world where a dreamer is on the road to meet the ultimate timekeeper, I can see that these symbols will have a big part in future issues. (This is number one of a six issue series.)

Nick Robles is relatively new to the comic industry. He has some short work on his website but Clockwork seems to be his first foray into mainstream comics. It will not be his last. Robles has a beautiful style. His depiction of Barrel Harbor makes it look like an Italian village, warm and lush colors enhanced by the technology that the steampunk world allows. Once we see a view of Crown City we see Robles able to stretch out, and he expands into an art deco feel for the technology-based city, which gives it that Burton/Metropolis feeling while still keeping it very warm. Even within the Watchmaker’s quarters, a man who is written into the story with no little amount of mystery surrounding him, we still get that warm, comfortable feeling, something that could be there to keep the reader off guard and blind to the true intentions of Mr. Anderson.

The key to this whole world is predictability, and Owen really is the cog with the missing tooth, or perhaps an extra tooth, which doesn’t know where he fits within the workings of the clock. I look forward to seeing where the master craftsman (Anderson) will jam the cog, and how those extra (or missing) teeth will change the way time is kept in Albion. Clockwork Angels is perfectly timed and precisely illustrated. 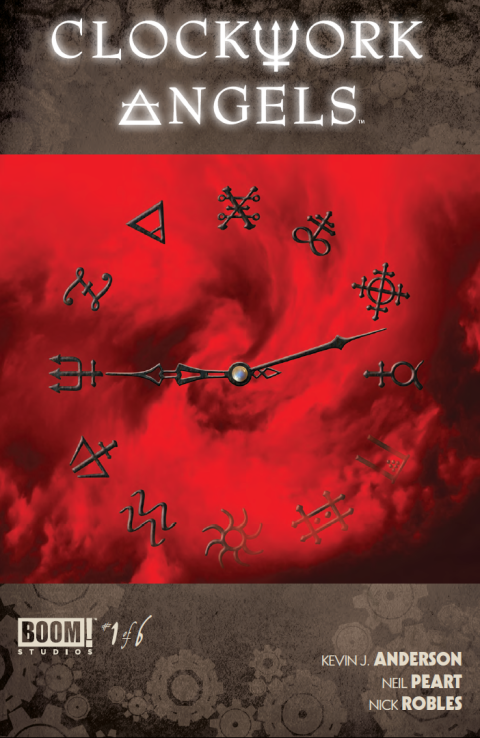