This Star Trek comic takes place after the events of Star Trek into Darkness, which makes it instantly comparable to comics like Smallville: Season 11 and X-Files Season 10 that take characters and events established on screen and continue telling that story in a different medium. This is a refreshing counterpoint to Hollywood’s campaign for accessibility which manifests itself in an obsession with origin stories and reinventions. I’ve always had time for these comics, I think it shows a bit of integrity, a willingness to do what others won’t, to address a want, or to go where no man - or woman… Forget it. Star Trek episodes were by and large standalone, with larger events slow boiling in the background, which makes it pretty perfect for the comic book format. This comic, essentially, writes an analogue to Star Trek The Original Series using the reality established in the recent Star Trek films. Which is cleverer than it sounds. The Romulan vessel that Kirk’s father died fighting is from the future. The timeline it experienced before traveling back in time to kill Kirk was the timeline of Star Trek The Original Series. The events of Star Trek The Motion Picture sparked an alternate timeline with the new Kirk and crew. What this comic is doing is giving this new timeline its Original Series style episodic stories, its five year mission. So while I understand that in 2014 its unlikely that many people will think of Star Trek comics as particularly fresh, this series has its place, and I think it’s a good premise and in principle a cool comic. That said, Star Trek #29 is a bit of a trippy read. Why? Uh… Captain Jane Tiberia Kirk?! 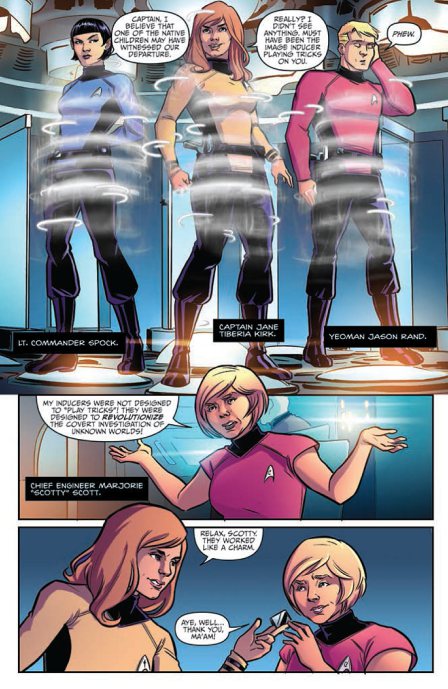 The comic opens with Spock and Kirk using image inducers to disguise themselves as members of an alien species. When their image inducers are turned off… Captain Kirk and Spock are women. What’s more, Scotty is a woman too. And Chekov. And Sulu. Maybe to some people reading this that is an intriguing premise but honestly, I just felt like I knew what was coming. And yes, it wasn’t long before we had the line: ‘a young female captain makes the big wigs back in San Francisco nervous’. And then ‘We speculate that this storm is the result of temporal entanglement. Think of all the possible realities existing in parallel’. What we have here is a very basic alternate reality used to ‘discuss’ – and I use this in the lightest possible sense – issues of gender. 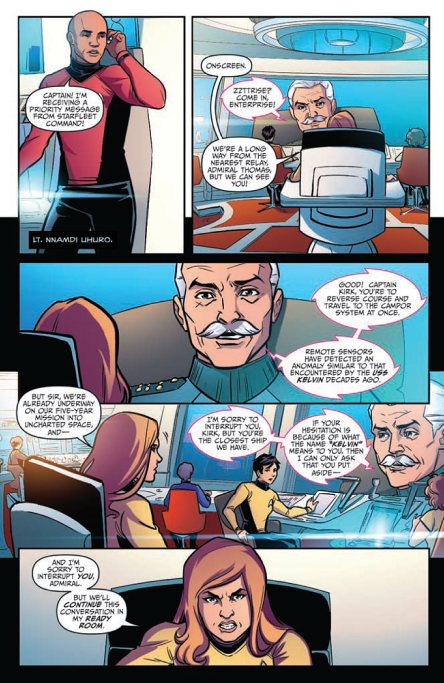 It’s like Captain Janeway never happened. The stoic, powerful leader put naturally at the centre of a crew, supporting them, guiding them through dangers – that is one type of discourse on gender. This is another. This is ham-fisted, obvious, uncultivated, staid, and ultimately uninteresting. In my personal opinion there is a difference between the transformation of Kirk into a woman and the women in Kirk’s crew fulfilling new purpose in this new timeline, in these new episodes. The former, essentially, and ultimately, holds the male figure of Kirk central to any dialogue about Gender – it is the man-turned-woman who is the discursive point here, the source of strength, the subject of adversity. In the Star Trek: The Next Generation two-part-er “The Best of Both Worlds”, Commander Shelby joins the crew and, like a young Riker, she is headstrong, disobedient, inventive. The power struggle that ensues between them – that is a very different type of discourse about gender. Honestly, this comic left me scunnered and feeling that Mike Johnson is pandering and insensitive; it made me sad and nostalgic for an old timeline that in this world of constant capitalist reinvention we may never see again. Anyway, the cliff hanger shows Jane T. Kirk meeting James T. Kirk. If that sounds like something you’d be interested in then we have very different tastes.

Once more I like the idea of this Star Trek series but I believe that this is such an astronomical miss that I’ll not be reading part 2 and probably will avoid Mike Johnson from here on in.