Yes, I realize this book stars a—Oh my God—Muslim superhero! Gasp. Shock. And no, I don’t think Marvel is pandering or trying to be “politically correct,” which is honestly a go-to for trying to describe a character as veering away from the standard (read male and white) blueprint. This book’s writer, G. Willow Wilson, is herself Muslim, and she has just as much of a right to write about what’s important to her as the multitude of Jewish, Atheist and Christian writers. I shouldn’t even have to bring this up, but as evidenced by the small-minded bits of conversation I keep catching in the comic store, maybe I do. Listen guys and gals, comics are filled to the brim with white characters. If it really bothers you so much that a young Pakistani woman is the star of her own comic, maybe you should just not read it. It’s obviously not aimed at you. But the world won’t end because there’s a little bit of variety in the usual selection.

Politics aside, Ms. Marvel #1 is a fairly solid first issue. Penned by the aforementioned G. Willow Wilson (Air, Mystic, Alif the Unseen) and penciled by Adrian Alphona (Runaways), the book stars sixteen-year-old Kamala Khan, a superhero fan and all-around normal teenage girl longing for freedom. No, not freedom from her religion. Seriously, come off it. 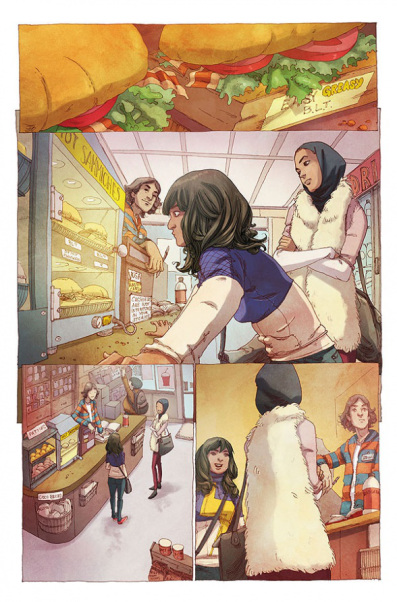 However, Wilson does bring Kamala’s religion to the forefront for most of this issue—the opening panel is a point of view shot of Kamala salivating over a bacon sandwich. But if religion restricts anything, it’s the way Kamala is viewed by others, particularly the ignorant Zoe—whom I suspect may play a larger role in this series, considering the events of this issue. Zoe is a character who focuses on all of the exotic aspects of Islam, especially those relating to fatwas and burqas—Edward Said might refer to this as orientalism—and it prevents Kamala from being seen as a normal girl.

But at its heart, Ms. Marvel doesn’t really spend all that much time fixated on religion. Even though Kamala wants to go to a party and to wear Captain Marvel’s “classic, politically incorrect costume,” she doesn’t appear restricted by Islam but rather by her age. Her family is depicted a loving, caring household. And seriously, what parents want their child running around at night at a party or dressing in the Cockrum Ms. Marvel outfit?

But I’d rather not give away too much plot, as we don’t see how Kamala gets her powers until the very end. Regardless, I feel this book will be taking the superpowers-as-metaphor for alterity. In the 80s, Kamala would have been a mutant. 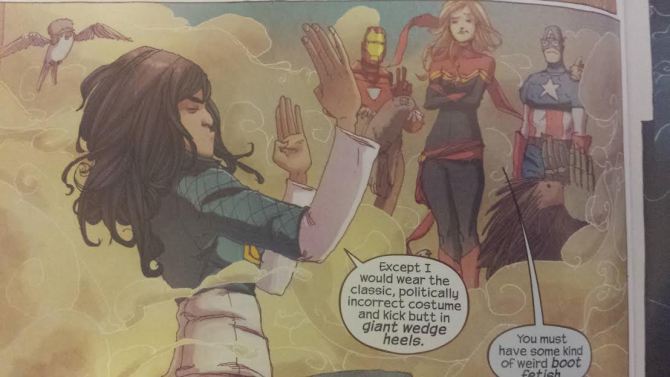 As for the art, I didn’t even recognize this as Adrian Alphona, and that may be because of Ian Herring’s colors, which lend more of a wonderful prismacolored look to the pages. The last book I recall Alphona working on is Runaways, but there’s been quite the improvement in the meantime. Although still clearly taking a manga influence, it seems that Alphona has leaned more towards the Kyle Baker school of cartooning, instead favoring more exaggerated expressions and rounded features.

Whether I continue to read this book in trade or in singles will depend on the pacing of the next few issues, as I got the feeling that this first installment was bit decompressed. But if you have a hole in your subscription list now that Young Avengers is over, this might be a fun book to pick up instead. I know I’ll get at least the next few, especially with race, gender, and religion so unapologetically at the forefront. If this is the type of comic Marvel’s going to be putting out now, I’m a little glad to be a Marvel zombie. 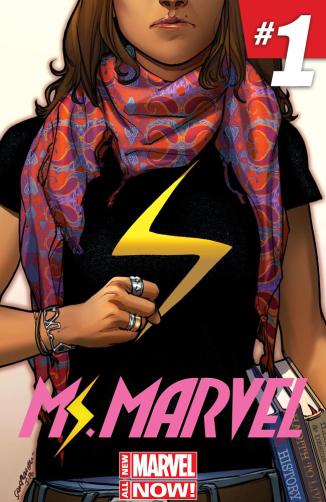