Kelly Sue Deconnick has proven herself to be one of the most versatile writers working today; her super hero work at Marvel is among the most innovative of their current offerings. However it’s her supernatural horror/ western Pretty Deadly that is breaking new ground among the independent mavericks.

END_OF_DOCUMENT_TOKEN_TO_BE_REPLACED

I have done some serious soul searching over this book, having been a huge fan of Hellblazer. My concerns are based on the use, or should I say misuse of the character outside of the Vertigo universe. Perhaps it’s END_OF_DOCUMENT_TOKEN_TO_BE_REPLACED

This series set the bar extremely high with a stellar first issue and has continued to raise that bar with each successive issue. Series creators Chris Dingess and Matthew Roberts’ tale of westward expansion meets supernatural horror is a truly ingenious blending of the historic and the horrible. END_OF_DOCUMENT_TOKEN_TO_BE_REPLACED

I never thought a comic book about Lewis and Clark’s historic expedition would up being one of my favorite horror comics ever! I mean sure Lewis and Clark’s exploration makes for some interesting reading but now, thanks to Chris Dingess and Matthew Roberts’ phenomenal imaginations END_OF_DOCUMENT_TOKEN_TO_BE_REPLACED

After many hours spent reading his work on such titles as Swamp Thing, Thunderbolts, Inhumanity, Superman/Wonder Woman, Red Lanterns and Letter 44, I have come to a very sane and quite logical conclusion which is that Charles Soule is a super hero. END_OF_DOCUMENT_TOKEN_TO_BE_REPLACED

I’m trying something a little different this week thanks to the Dynamite release of two titles with the same main character. Red Sonja has often captured our imaginations and hearts END_OF_DOCUMENT_TOKEN_TO_BE_REPLACED

If you are a regular reader of my reviews (and I hope you are) then you know I am never at a loss for words when it comes to praising the genius of Charles Soule. Soule has taken the industry by storm with an impressive and varied body of work founded on solid character development and END_OF_DOCUMENT_TOKEN_TO_BE_REPLACED

Charles Soule is without a doubt the hardest working man in comics. He is certainly prolific but more impressive than the sheer volume of his creative output is the quality of the work he produces. Soule is impossible to classify as any one type of writer because his work END_OF_DOCUMENT_TOKEN_TO_BE_REPLACED

So here we are about to close out another year and as sure as public drunkenness, unwanted gifts and over eating are all part of the festivities indulged in to celebrate the end of twelve months of END_OF_DOCUMENT_TOKEN_TO_BE_REPLACED

When I first heard that Charles Soule was going to be following Scott Snyder on Swamp Thing I wasn’t very familiar with his work and being a huge fan of Snyder’s, I maintained a wait and see attitude.  I honestly didn’t expect END_OF_DOCUMENT_TOKEN_TO_BE_REPLACED

I arrived at the Baltimore Convention Center prepared for the second day of Comic-Con completely solo. My comic book compatriots had abandoned me opting for END_OF_DOCUMENT_TOKEN_TO_BE_REPLACED

I was counting the seconds waiting for September 7th like a kid anticipating Christmas and the promise of new toys and dreams fulfilled. Well, Comic-Con flew into the cheerless city of Baltimore and brightened it with all the magic and spectacle END_OF_DOCUMENT_TOKEN_TO_BE_REPLACED

The closing gambit of Animal Man #23 sees Lemire’s run entering its third year of readability, having already outlasted the majority of the New 52 titles on my pull list by over a year. END_OF_DOCUMENT_TOKEN_TO_BE_REPLACED 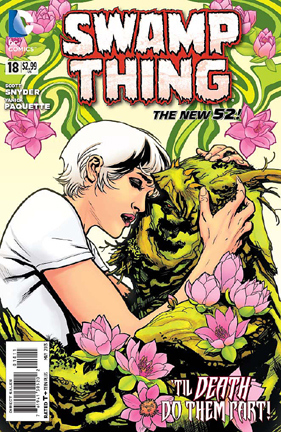 Snyder and Paquette’s final issue gives us the bittersweet ending we were all hoping for. Swamp Thing #18 proves that when these two work together, it is magic.

Alec Holland and The Parliament of Decay bend space and time to allow Abigail to take her place as the avatar of death. This issue follows the climatic end of that quest. The final battle with Anton Arcane, who must be stripped of the mantle before Abigail can take it up, is the kind of outstanding action that sustained this series success in the beginning of this run. Full of tenderness, Snyder’s star-crossed lovers are given the treatment they so richly deserve. It is a satisfying conclusion to this eighteen issue run.

Abigail Arcane is given a chance to shine in this issue. Her character grows, as she becomes a powerful force to be reckoned with. The redemptive tone of issue #18 reveals Abigail to be strong and courageous to an even greater extent than we have seen preceding this point. She is capable of immense sacrifice and bravery. In addition to Snyder’s direction of Abigail’s story, Paquette quite literally paints her in a new light as well.  His character design in regard to Abigail is truly inspired, and singularly beautiful.

Snyder’s swansong is a near perfect ending to his epic saga; equally strong is the work of Paquette. Deftly personifying both death and rebirth, Paquette’s expressive artwork reaches new levels of intensity. Organic layouts and comprehensive aesthetic environments bring life to the story. Nostalgic symbols like orchids fill empty space, reminding us of all that Alec and Abbey have been through.

The culmination of this year-and-a-half long run brings the skills that Paquette and Snyder have shown over time to a new level of perfection. Swamp Thing #18 is full of high-quality action, strong character development, and emotional depth. In other words, it brings together the best parts of what we have come to expect from this incredible team.
__________________________