I have done some serious soul searching over this book, having been a huge fan of Hellblazer. My concerns are based on the use, or should I say misuse of the character outside of the Vertigo universe. Perhaps it’s Ray Fawkes writing that keeps my hanging on to the hope that this series will one day restore John Constantine to his former glory or maybe it’s just plain morbid curiosity of the car accident on the side of the road variety that keeps me plopping down my $2.99 every month. Either way, one thing I can say about this book is that it is consistently inconsistent; it has had more ups and downs than the Empire State Building’s elevators. I may sound negative in my comments but the truth is I very sincerely want to like this book, scratch that, I want to love this book but barring an issue here and there that delivers on all fronts, I haven’t been given much to love. I’m afraid this issue is not quite enough to get that love affair started either.

This issue is another installment of the Forever Evil: Blight storyline, crossing over and continuing in Pandora #9. The story as a whole has not really been knocking my socks off in any department. It has rarely risen above mediocrity in story or visually. The artwork has been solid, basically DC House style but nothing stellar or memorable, much like the narrative it has been disappointingly lackluster. I’m saying this as a fan of Fawkes, these characters and the idea of a darker corner of the DCU having the spotlight focused on it from time to time, no pun intended, but the problem with this book is that it is forced to exist in two worlds, the super hero dominated DCU proper and the more ethereal, supernatural Vertigo universe. While Constantine no longer calls the Vertigo universe home, the character is still very much beholden to those sensibilities that made Hellblazer such a consistently great book. I realize this is a tough spot for Fawkes and company to be in but I have seen glimmers of brilliance over the past 12 issues that keep me hopeful and coming back.

At this point in the story Constantine faces his old friend Nick Necro to hammer out the details of their tumultuous past and to come to terms with the strained relationship shared by the two men and Zatanna, for whom they both have professed feelings. This all goes way book to the pursuit of the Books of Magic. The fact that Fawkes picks up such an old and engaging plot thread is one of the reasons I refuse to give up on this series. Necro it seems has put a carrier spell on all the members of the Justice League Dark, effectively making them his puppets whenever the need may arise.  Add that to Constantine and Zatanna’s recent torments of Project Thaumaton and you can understand why our brooding Brit may be feeling a tad pessimistic. Constantine’s first order of business is to unlock Deadman from the Sea King’s hijacked body; this proves to be an easy task as does his encounter with Swamp Thing. However the ease with which he has dealt with these obstacles is all part of a trap set by the cunning Necro that lands all involved on a non-stop trip to Hell.

There is quite a bit of back story in this issue but Fawkes handles the material in such a way that the narrative moves forward at a decent pace, never feeling bogged down or full of pointless exposition. John, Nick and Z share an intriguing and engrossing past that makes for some extremely entertaining reading. Fawkes uses these instances to fully flesh out this relationship and to let us know the characters that much better. Visually, Beni Lobel turns in some stunning pages, particularly a two page spread featuring Swamp Thing. Lobel’s innovative use of panels allows for an organic look and helps move the narrative along visually. There are some really nice examples of design work in these pages as well.

Although this issue is not a complete victory it does have its moments of redeeming story gems. The flashbacks alone are worth reading this one but they are not enough to sustain a crossover event. Forever Evil: Blight is too far along to become an unmitigated success but I believe it could still pull out a late inning victory. This is definitely not the story that any of the creators involved will be remembered for but if you have been on board this far I would stick it out for the duration.  I can’t say how much longer I would stick around for in the big picture but I am a cockeyed optimist who would love to see Constantine return to his roots or at least close to them and I believe Ray Fawkes has it in him to do just that, if DC will allow him. (3.5/5) 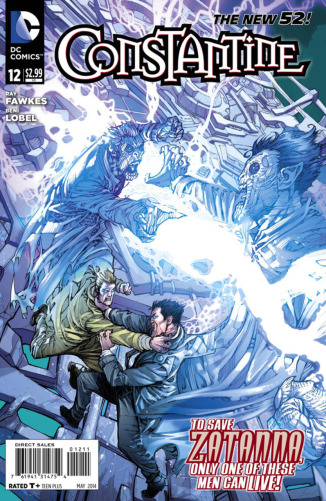