Summary: In the present day a famous neurosurgeon by the name of Stephen Strange is caught in a car accident that destroys his prized hands, the tools in which he makes his living. Distraught by this sudden turn of luck and suffering from nerve damage so horrendous he may never use his hands again, Strange seeks help with mystics in the sacred temple of Kamar-Taj after he hears rumors of their ability to heal that which modern medicine has failed to. This leads Doctor Strange down a path of enlightenment and magic as the gateways to multiverse is open before him. However, evil lays waiting down every pathway and the proud Strange must overcome his own demons if he’s to take down actual ones….

Review: Doctor Strange is the latest in Marvel’s massive franchise of films being the 14th overall. At this point in their filmmaking history Marvel has done a pretty decent job at building up a formula in how they tell their stories while also skewing that formula from time to time in order to shake things up. With Doctor Strange however Marvel bounces back to its origin story formula which can at times make the experience feel redundant, however it also mixes in just enough new ingredients to also make the film feel rather fresh. 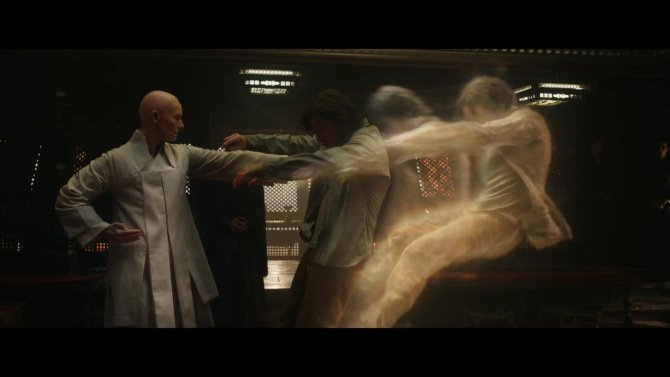 Let’s talk about the familiar elements. Tell me if this doesn’t sound familiar to you: Famous and successful, yet arrogant man doesn’t know how to be humble. Gets caught in a life-changing event that brings him down. Seeks redemption through other means and is rewarded hero status after he stops some big, evil threat while also learning something of humility in the process.

That’s the basic formula used for Iron Man and the journey Tony Stark ends up going through. However this is a hard formula to break through when both Tony Stark and Stephen Strange are in some ways similar characters in their personalities. In that respect you have to hand it to director Scott  Derrickson for making it to where those familiar elements don’t beat us up over the head too much.

However as far as their characters go it’s very hard not to see the similarities. Where things then become unfamiliar and fresh feeling is how the characters act towards others after their life changing events. Tony sort of gets over it and starts building is suit in order to become a superhero on purpose. Where as Stephen has a meltdown and lashes out at those who care about him. Tony, again, builds his suit on purpose, Stephen seeks for others to give him power to fix his broken hands.

In this respect Strange ends up learning a harsher lesson in arrogance, something Tony must learn through the course of three films Stephen Strange has to learn it in one if he’s to show any kind of growth in a form of power to requires spiritual uniformity. This is driven home in a later scene of the film when the Ancient One is dying and Strange and her both have a heartfelt talk in their astral forms before she blinks out of existence.

She spells it out for him in a pep talk that Tony never received and is only just now after Captain America: Civil War beginning to learn: It’s not about you. It’s about making sure you use the gifts bestowed upon you to help others, whatever the cost. Even if you have to make decisions you’d rather not for the greater good. It’s a heavy lesson to learn for Strange but one he needed to hear. Of course he’s still a little arrogant after the end of the movie but considering it’s just a part of who he is it’s now a part of his journey to be more humble – which begins here in a big way. 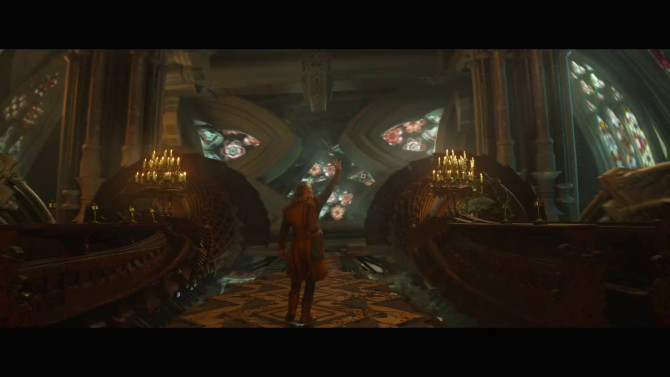 The other big familiar part that is unfortunately a staple within the Marvel films at this point is the villains. Kaecilius is an alright villain, he doesn’t fall within my spectrum of favorites but he’s just there. Of course he wants to bring about world domination in his own way by giving it over Dormammu who will bestow “everlasting life” upon the human race. Yeah, sure he will. Unfortunately Kaecilius is very well fleshed out and you kind of have to read the prelude comics in order to understand just why he’s doing what he’s doing.

I don’t understand why Marvel can’t just allow their villains to be fleshed out. If Captain America: Civil War can make me understand and actually care about Baron Zemo in a film weighted down with too many other characters already, then Doctor Strange could have given me a lot more Kaecilius than it did. That being said, Dormammu was intensely awesome. He wasn’t fleshed out either but for his role in the film I don’t think he specifically needed to be. He can be fleshed out in later films, as well as it was genuine surprise seeing him show up at all.

Finally, there’s Christine Palmer, who in the comics is the actual Night Nurse, a role currently being developed for Claire Temple in the MCU Netflix shows. Christine unfortunately does play the role of the love interest in this film but where it’s gotten old in the past with certain female leads – Jane Foster – here Christine is allowed to show actual personality and be on equal level as Strange when it comes to interacting with him. Usually it’s apparent the girl is playing the second fiddle but personally I didn’t see that with Christine any time she was on screen and for that I was thankful.

On to the unfamiliar elements, Doctor Strange for all its mysticism takes time out of its story to focus a bit more on the real, the gritty of life and that’s something I’m glad we’ve gotten to see more of. Like in Incredible Hulk and Ant-Man, fantastical things do happen but a good portion of the run time is dedicated to every day life and how it effects us. We also don’t get a mcguffin arc in this movie either. Yes, the Eye of Agamotto is ever present and Strange ends up using to save the day but it’s not the object of either Kaecilius or Dormammu’s desire. Flat out they want to control the Earth, the Eye of Agamotto is something the two – who know its existence – don’t even consider worrying about.

It’s refreshing in that aspect because one thing the MCU, and that extends to the TV side of things, has gotten really familiar with is the use of mcguffin – an object that propels the story forward rather than the characters themselves. The movie does a great job at showing off the Eye as well, and even treat us to the revelation at the end of the film that it is, indeed, an Infinity Stone. Only one more to go. 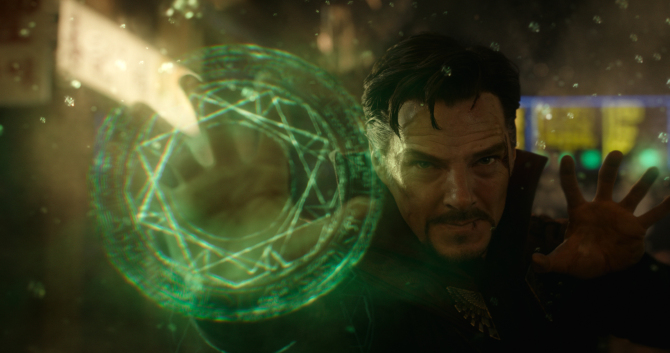 The biggest departure from anything else however is the stunning, mind-bending visuals that can’t be overstated. We got a small taste of it with Ant-Man last year when Scott Lang entered the micro-verse, but here we get a full walkthrough of the multiverse and I am so pleased with Marvel’s guts to go through with it and give us balls to walls original, strange and gorgeous looking takes on the universe that is nothing like we’ve ever seen on screen before. I like strange, unusual and original things and this movie definitely delivered with its broader-than-life takes on how different worlds can warp apart from ours.

There’s also a really cool battle sequence later on that takes the world we know and completely bends it on its ear. Unfortunately I’m not really sure how to describe the experience other than taking a Rubik’s Cube, moving it around to create different patterns, and then putting it back together at the end. If you watch this movie for any reason make it for the visual experience.

Doctor Strange isn’t a perfect film. It has a lot to it that remains routine, sadly to say, and goes to show that come Phase 4 Marvel really, really needs to start shaking things up. Thankfully there’s a lot of smart, different, and unusual choices made in this film as well that keeps it fresh enough to be an enjoyable and trippy ride that definitely needs to be seen. One example I’ll bring up but won’t expound upon is how Strange defeats Dormammu in the end. I won’t tell you how he does it because it’s worth the experience because it’s genius in how simple and smart it is. It’s not like anything we’ve seen in past movies before.

Marvel, let Doctor Strange breed one lesson to you: Less formula, more experimentation. That’s what people are going to talk about and in some cases have already started talking about. Please listen. Otherwise, this was another stellar hit out of the park. After 14 films though, we’ve become more aware as an audience, and we just want to see you continue to get better.

Final Score: 4 Acid Trips through the Multiverse out of 5