Story and Art by Ryohei Yamamoto

Summary: Reiji Hakuba is your normal, everyday average high school senior.. except for one tiny detail. He’s been diagnosed with an excessively rare genetic disorder called the ‘ubermale gene’. Which causes girls in droves to see him as a super stud rather than what he really is by creating an optical illusion around his body. So while Reiji only has eyes for one girl all other girls have eyes for him. How will Reiji pull himself out of this one?

Review: Love Rush is yet another Jump Start series which has also recently been added the regular Jump line-up as I write this. Just like The Promised Neverland.

Most harem romance comedies have a certain trend. We get a loser main male character with no sexual or perverted experience what-so-ever, he likes a girl but has no confidence to tell her how he really feels, he then spends the entire series being unnaturally courted by several other women while being unsure of whether to stay faithful to his real feelings or not, and then at the end of the series we get to learn which of the girls he finally chooses to be with.

With chapter 1 some of that is put on display but utilized to very different effect and in a way that’s quite welcome from the norm. While I find the whole ‘ubermale gene’ to be over the top and hokey it’s at least a fun take on why girls in shonen romance manga are always attracted to the main character. Thankfully the gene doesn’t make it easy for Reiji to put on a charade as he still tries to keep the ladies and himself pure.

His heart is completely set on his childhood friend, Shizuku Ichinomiya who he’s been close with all his life. Shizuku is definitely an interesting character but I haven’t completely taken to her yet. She’s pretty emotionless and all-around clueless however she’s compassionate towards Reiji and you can she really cares about him.

I do hope their impending relationship isn’t drawn out too long but at least there’s another hook to draw in us readers that I haven’t mentioned yet. See, while everything I’ve talked about thus far is all fine and dandy there is another main character with an awfully curious skill set that also enters the fray in this chapter: Kokoro Roko Rokoko, a cupid from a far off land in the clouds completely crowded with monster girls. 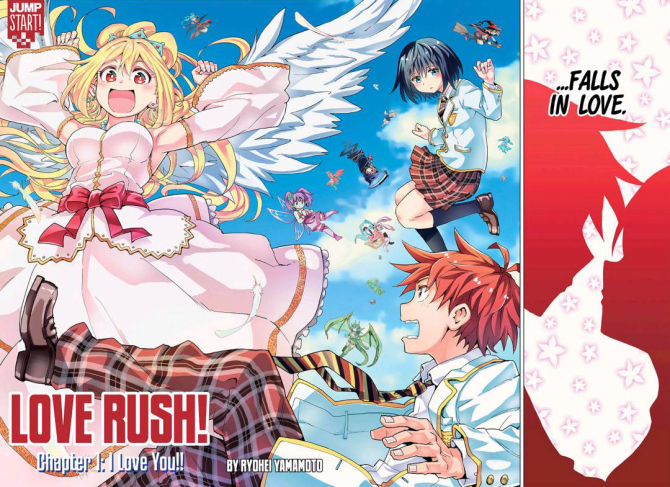 I honestly jumped to conclusions with her at first, figuring she would be the annoying main girl who can’t seem to understand that Reiji only has eyes for someone else. Especially as a cupid, who’s power is literally to make people fall in love with one another, I figured it would cause her to be unable to embrace that compassionate side of her.

However to my surprise Kokoro – which that word literally means ‘heart’ FYI – while she does want Reiji to love her, she also wants him to love her naturally. Which is endearing. But she also ends up accepting his feelings for Shizuku and it’s quite fascinating to watch her try to come to terms with it. When Kokoro is sad you’re sad because it’s not just the ubergene creating these feelings for her, as it’s revealed that she’s been pining after him since they were kids – he didn’t know she existed – before the ubergene kicked in.

Going back to Shizuku for a second, it’s important to note that as Reiji’s longest friend she doesn’t see him with the ubergene and can see past the effect’s optical illusion. Both her and Kokoro see the real reiji and I find that’s going to be an interesting dichotomy going forward.

The chapter ends with Reiji trying to tell Shizuku his feelings for her when a monstrous horde of monster girls appear, having been drawn from the clouds by the power of his ubergene. I’m incredibly interested to see where this goes from here as the series has a strong start.

I do wanna mention Yamamoto’s artwork as I really like it. It’s very rounded and detailed, while still being fun and funny. Many of the characters and panels are quite kinetic and I like the character designs quite a bit. Especially Kokoro’s. She’s really cute and her wings are gorgeous.

Overall I’m very excited to see where things go. And oh! Almost forgot, this chapter takes place the day before Reiji’s 18th birthday putting all of these characters at nearly of age which is another nice change of pace for a shonen harem comedy romance.