Autobot City has been infiltrated in REVOLUTION #4 by the only human on Earth capable of succeeding in such a mission - Snake Eyes. With relations between the Transformers and humanity strained to breaking point, together with ROM’s mission to vanquish the Dire Wraiths and the arrival of the Micronauts from Microspace, the conflict surrounding Ore 13 now reaches a major turning point. Snake Eyes confronts Optimus Prime as the forces of G.I. J.O.E, Miles Mayhem, and M.A.S.K prepare to move into action, but nothing can prepare the heroes of the IDW universe for what they are about to face as the battle lines are drawn!

IDW Publishing’s exciting bi-weekly crossover event celebrating more than a decade of adventures continues in REVOLUTION #4, as the epic storyline to unite the IDW and Hasbro properties: Transformers, G.I. JOE, Action Man, M.A.S.K, ROM, and the Micronauts in one collective universe reaches its penultimate issue, and writers John Barber and Cullen Bunn ensures the action-paced pace of this saga doesn’t let up for a moment.
Following G.I. J.O.E’s commander Scarlet’s discovery about the deceased J.O.E’s having alien DNA, Baron Karza’s plot with a secret ally, and the clash between Optimus Prime, Soundwave, and Windblade with ROM, as the Micronauts travelled from Microspace at the behest of the Time Traveller and arrived in Autobot City, the diminutive crew of the Heliopolis suddenly found themselves in a new universe and face-to-face with Snake Eyes! 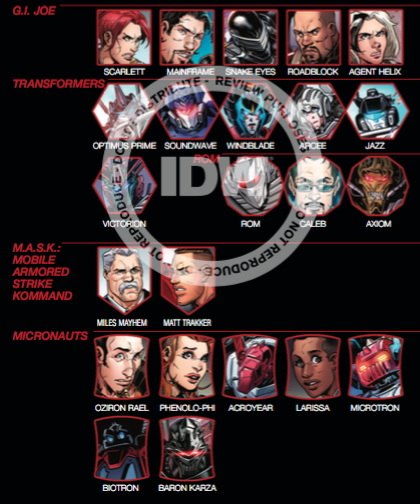 REVOLUTION #4 is crammed with non-stop action as all the major factions involved in the conflict over Ore 13 begins to converge. Offering further insight into how the world’s deadliest ninja commando, Snake Eyes, infiltrated Autobot City to set up last issues cliff-hanger, REVOLUTION #4 then treats us with the gloriously staged chaos of mistaken identities between Snake Eyes, the Pharoid Oz and his fellow Micronauts, and the Transformer Arcee. The canny mix of action and humour writers John Barber and Cullen Bunn employ here to allow the Transformers, Micronauts, ROM, and Snake Eyes to overcome their individual differences is utterly sublime, and it also instigates some of this mini-series’ most defining moments.

Meanwhile, M.A.S.K’s director Miles Mayhem secret collaboration with Co-Founder of Deepwave Technologies, Caleb Awan, becomes increasingly ominous, while the Dire Wraiths plans for Ore 13 enters its final stages, and G.I. JOE Commander Scarlet and Roadblock return to Governors Island in the wake of some recent events. The way everything links into the REVOLUTION tie-in issues is handled exceptionally well here. You don’t necessarily need to have read G.I. JOE REVOLUTION #1, Transformers REVOLUTION #1, or Action Man REVOLUTION #1, to enjoy REVOLUTION #4; however it certainly makes this issue even more enjoyable as it brings a wider perspective to all the various plot elements as they begin to slot together. 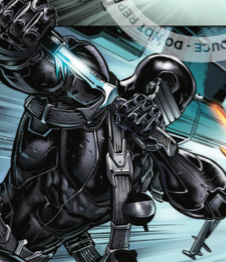 The artwork by Fico Ossio provides a veritable tour de force of stunning visuals for REVOLUTION #4 that effortlessly juggles the various setting, characters, and frenetic action in a way that totally immerses you in the story. There are so many standout moments to choose from: Snake Eyes sneaking into Autobot city, that initial skirmish with the Transformers and Micronauts, Caleb and the hybrid Axiom’s designs for the Wraiths Eldritch Magiks, Matt Trakker leading M.A.S.K and their Cybertronian Tech enhanced vehicles charging into action, and the spectacular assault on Autobot City as the combiner Victorion valiantly holds the line against impossible odds, are all wonderfully realized by Fico Ossio, together with Sebastian Cheng’s amazing colors, to make the big splash pages and that dynamic battle royal two-page spread to die for, amongst some of the many highlights to look out for in this outstanding issue.

Loyalties are tested to the limit, alliances are forged and broken, and the fate of the Earth and Microspace hangs in the balance as REVOLUTION #4 races towards its most startling cliff-hanger of all!. With its great story and art, insightful character bios, and plethora of stunning covers to choose from, this is one issue of IDW’s REVOLUTION that you won’t want to miss - and it even dusts off some old favorites for good measure as it sets everything up for a truly epic finale!