Review: First things first, I never noticed the Johnny Blaze easter eggs towards the beginning of the episode like it seems a lot of people did so unfortunately I missed out on that excitement however it’s fun to see at least some part of the character’s lineage exists within the MCU. Besides, my Ghost Rider was Danny Ketch so I’d be far more excited to see him in the show at some point – in a flashback. If we do get Johnny Blaze though I definitely won’t be complaining.

The episode begins with a flashback to our main ghost, Lucy and her husband before she died and he was put into a comma discovering the Darkhold which we find out has a really cool ability to appear to a human in their native tongue. So Lucy sees the Darkhold in English and her husband sees it in German, which is his first language. Starting here and at the end of the episode we also learn that the Darkhold holds explanations to theorized quantum physics which we’ll be seeing more of in Doctor Strange next week.

Following up on that we see our team invade a prison to break out Robbie’s uncle Eli so that he’ll help them find the Darkhold when it’s discovered that Lucy and her band of merry “incorporealites” have already invaded the area causing many of the staff to turn on them. This leads to an episode long adventure of the team trying to get Eli out of the prison unscathed by the ghosts and other inmates.

This episode wasn’t bad but it was filled with fluff where none was needed. Take for instance the episode long breakout adventure, for several scenes we see Coulson, May and Daisy running from inmates they’ve discovered are also Watchdogs having been locked up. These guys are out for blood, sure, but not once does it ever feel appropriate that these 3 incredibly well-trained SHIELD Agents, one with powers no less, should be running from an admittedly small horde of unarmed assailants.

We know our heroes could easily kick their asses. It’s always possible they weren’t trying to leave a trail but considering law officers have already ended up on the floor by this point thanks to Coulson and May’s hands the whole “don’t leave a trail” motif is completely thrown out the window. Before the episodes we of course get that fight with Daisy choosing to take on the horde all by herself before ultimately being saved by Coulson and May.

That whole side quest just feels empty given we’ve seen these 3 take one more numbers of armed assailants before and we have 3 whole seasons of them doing that to prove it. Otherwise everything else about the episode felt very solid to me. Mack and Robbie team-up to actually get Eli out of the prison and succeed but after getting separated and then Robbie choosing to take out an inmate rather than see his uncle safely into SHIELD’s custody, the whole shebang goes to naught after Eli is taken in by the ghosts. 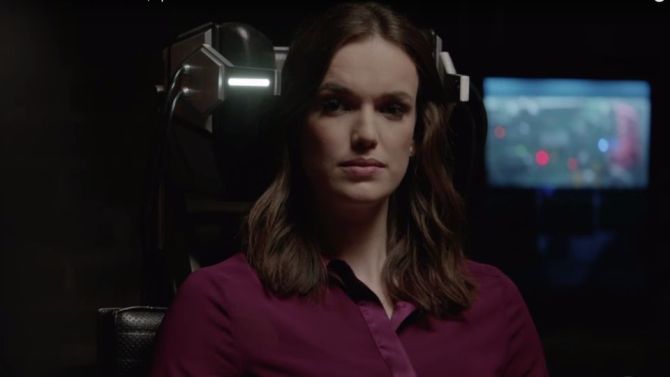 Finding out one member of the Fifth Street Locos, the gang responsible for Gabe being crippled, is left and behind bars, Robbie decides to enact some vengeance. But not before learning that someone called a hit on him and his brother Gabe which was why the two of them were targeted by the Locos. Not sure how I feel about this hit revelation but we’ll see how it goes. I would have been more invested if it was just a random spray of bullets. Again, we’ll see where it goes.

There is another side plot that happens in this episode involving Director Mace and Jemma. Jemma takes her lie detector test and nearly fails it when Mace calls her into his office to get his help in his upcoming debate against Senator Nadeer. Jemma is given the task to talk in Mace’s ear and give him information about the Inhumans during the live coverage but like any old suit he ultimately never listens to her leading to some very awkward scenes.

The highlight is when Nadeer’s pressuring on how Mace is handling the Inhuman situation causes him to out himself as an Inhuman for all the public to hear. We got to this revelation far sooner than I imagined we would and I’m incredibly interested to see where it goes. We’re also told that he saved lives at the U.N. Bombing in Vienna that killed Black Panther’s father in Captain America: Civil War.

That’s a great way to tie the two characters together but even then Jemma throws a wrench in Mace’s plans to make her take another lie detector test when she reveals to him that she knows he was not the hero the public knows him to be in Vienna. You go, Simmons! So excited to see where all this goes. I actually like Mace but I’m excited to see him become a fully realized character. A drastic step in that direction was taken this episode.

The final scene sees Nadeer grill Mace on her knowledge that SHIELD was working with current fugitive “Quake,” or Daisy and incorporated the help of a fire-headed guy who ended up killing a “reformed inmate,” - the final Locos member he talks to earlier in the episode. This is the first time Mace seems to be hearing about all of this which means next week is going to be really, really interesting. We’re also getting Ghost Rider’s origins in the next episode so I am very excited.

Lockup was admittedly the weakest episode of the season so far because I felt a good chunk of it was unnecessary and only padded the episode for runtime while sort of walking all over the abilities our main character’s have. It’s definitely not a bad episode, it just could’ve done better.

Final Score: 3 Prison Breaks out of 5