Written and Illustrated by Yasuhiro Nightow

Summary: In the future, Earth has been abandoned and new planets have been Terraformed for the human race. On one particular planet the days of the Wild West run rampant again, however instead of horses they’re vehicles and high-powered guns, and instead of dust storms you have Vash the Stampede. The humanoid typhoon. And a walking natural disaster. Who is this mysterious Vash, and what’s his purpose of existence? It’s Deep Space Planet Future Gun Action in Trigun!

Review: Trigun as a manga has a storied history that rivals that of its more famous anime counterpart. The original serialization, which we’re discussing here, only lasted about 22 chapters and 3 volumes total after being unceremoniously canceled. It was soon re-serialized as a much longer sequel under the  title of Trigun Maximum. We’ll get to that eventually. And the anime takes stories and plot lines from both of these. But for now, let’s talk about the original short-lived Trigun.

Really, it’s nothing special for the first 12 chapters or so. As Nightow spends most of that time on frivolous over-stayed plot lines that could have been done in a few chapters each instead of taking up a  good portion of the first half of the mange. The biggest chunk being dedicated to a “train heist” storyline that involves a band of pirates attempting to take over a transportation device that’s carrying many of our main characters across the vast desert.

Even before that however we discover Vash the Stampede is but a humble, gun-toting extreme pacifist who will do anything to make sure no one gets hurt. After a good portion of a town is taken out however by bandits looking to take in his reward, that of $$60,000,000,000 double dollars, Vash is pushed too far and we get to see what the humanoid typhoon is really like.

Vash as a character is a pretty standard archetype action hero from the 90s. He doesn’t like violence but will get the job done if need be. What makes him different and was possibly part of the original manga’s downfall is that he’s an extreme pacifist which can cause for some silly moments to come off more as hokey.

He is an endearing main character, but that’s not really shown until later after chapter 13 when Nightow introduces the villains of the story. Probably in an effort to save the publication at the time because once Legato and the 12 Gung-Ho-Guns group of assassins are introduced things really do shift into being more serious. The later half of the series is taken up by Vash and Wolfwood – who’s used in a much different way here in the manga than he is in the anime – taking out the 12 assassins. Generally with ease. Had the series been longer, and not cut short, I would have liked to seen this arc last a little longer so we could see the group of assassins do more. 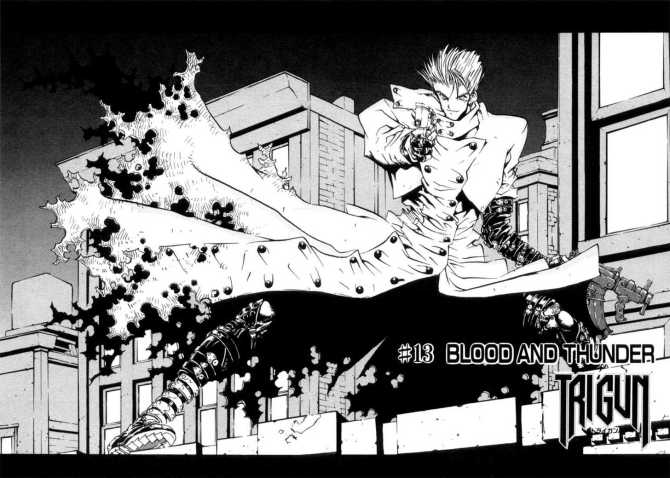 The ending of the manga is also different than the anime. Sort of. There’s a lot of similarities within the endings of the manga and the anime, I won’t discuss them here, but the manga does leave way for more to come and also features Wolfwood as still being alive at the end of the manga. While the latter half of the manga is still pretty good, it’s the roughness of the first half that hurts this series the most and I would guess was a lot of the reason it only lasted 22 chapters originally.

Nightow’s artwork also doesn’t help. He has some fun ideas, and his out there characters are all generally pretty cool, but his original artwork for Trigun as a series isn’t that great. And really doesn’t begin to shine until he starts telling the story of the 12 assassins. The final chapter is gorgeous to read. And I assume Trigun Maximum will look just as good.

As a whole Trigun is unfocused for awhile in what it wants to do, and when it finally figures it out it comes too late in the game to really save the series from cancellation. But there’s a lot of promise in seeing some of the ideas Nightow had that he had to rush and I can’t wait to see his other ideas fully explored in the sequel. This isn’t a bad series by any means, and if you like the anime definitely check this series out, but it’s not the best either. Overall it’s just pretty okay.

Final Score: 3 Supernatural Assassins out of 5