Explosive destruction strikes the Earth as the REVOLUTION begins, the battle lines are quickly drawn, and soon the world believes that Optimus Prime and the Transformers are the ones responsible for the chaos. G.I. JOE gathers an elite team of powerful heroes to counteract this new threat, with Action Man and M.A.S.K. fighting to protect the human race - but what role will ROM and the Micronauts play as the conflict unfolds?
In a celebration of over a decade of adventures from IDW Publishing and Hasbro, REVOLUTION is a brand-wide bi-weekly event that will finally unite the Transformers, G.I. JOE, Action Man, M.A.S.K, ROM the Space Knight, and the Micronauts together and reinvent them in a one shared universe. This major comic book event kicks off in REVOLUTION #1 by John Barber, Cullen Bunn, Fico Ossio, Sebastian Cheng, as this series and its tie-in issues span an epic storyline that will transform the IDW universe like never before! 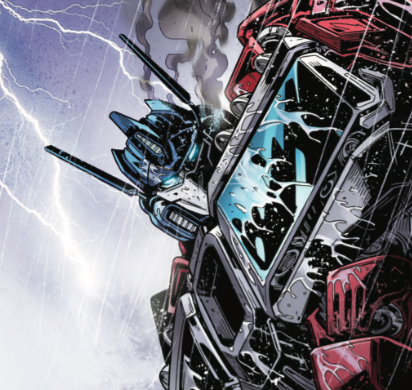 John Barber and Cullen Bunn weave a frenetic pace of mystery and action from the outset with Revolution #1, as Action Man and Salmons investigate a distress signal coming from Mount Olympus, in Greece. Here Action Man uncovers a dark mystery, one that involves covert operations, G.I. JOE, the Transformers, and some mysterious - and highly unstable - crystal formations. This explosive opening reverberates all the way to the White House, where the President and the original G.I. JOE General Joe Colton, readdress Optimus Prime’s recent annexing of Earth and the rising of a Titan in Monument Valley in light of this latest development concerning Ore 13 - which they know the Transformers can use as a power supply.

But as the forces of G.I. JOE make preparations against the perceived threat posed by the Transformers, over in the Autobot City in Monument Valley, Optimus Prime knows he must act quickly to discover why the Ore 13 inside Mount Olympus exploded, or tensions between the Transformers and Earth’s leaders are bound to become even more frayed.
REVOLUTION #1 covers a lot of ground in a very short space of time. The foundations for REVOLUTION has already been set out in the numerous IDW titles involved in this event over the last few months, so regular readers will feel right at home, but the real masterstroke here is how John Barber and Cullen Bunn have skillfully written this issue in a way that also make this storyline easily accessible to new readers as well. Taut plotting, strong characterization, and great dialogue all collectively drive the narrative, sure, there are some plot points you can sense coming a mile off, but there’s still lots of unexpected surprises too.

REVOLUTION #1 Chapter 1: Concord Hymn, features highly impressive artwork from Fico Ossio to launch this event in fine style. The boldly structured, detailed packed, page layouts relay the action effortlessly. From the exciting opening sequences with Action Man descending over Mount Olympus, events shift to the political and military intrigue in Washington, the human cast all get their moment in the spotlight, and the scenes in the Autobot City, and later Oregon, really play to Frico Ossio’s artistic strengths. The Transformers look both distinct and powerful, Optimus Prime looks especially brooding and thoughtful at times, Sound Wave and Windblade are also well realized, and we get some brilliantly orchestrated transforming action with Jazz and Arcee later in the issue.
The colors by Sebastian Chen are another nigh highlight of the opening issue, with a vivid palette of tones and shade employed to reflect the mood of each scene, every beat of the story hits the mark. Sebastian Chen’s colors really highlight the finer details of Ossio’s artwork, the shimmering glow of the crystal Ore 13 resonates with power, all of the Transformers look resplendent with their vibrant color schemes, the holographic representation of Jazz and Arcee’s mission to tackle a flood in Portland, Oregon provides a beautiful focal point in a key scene, and the rain swept face-off between the Transformers and the forces of G.I. JOE in Oregon makes you feel like you’ve been placed smack, bang, in the middle of the action.

Despite all of Optimus Prime’s best efforts to calm the situation after the forces of G.I. JOE attack Jazz and Arcee, with even Soundwave and the Combiner Victorion showing the utmost restraint to ensure no one is harmed, REVOLUTION #1 concludes with the intervention of a new arrival - one whose actions provide a shock twist ending that is sure to instigate major repercussions on all sides! It would seem Optimus’ old friend Kup’s sage words of advice could now perhaps carry far more weight then ether of them realizedÖ
Whether you choose to follow the main event in the pages of REVOLUTION, or just the tie-in issues across IDW’s range, or indeed the whole event, REVOLUTION is already shaping up to have something for everyone to enjoy - especially if you like variant covers, and believe me there’s a wealth of beautiful cover to choose from for this issue alone!

REVOLUTION #1 has all the right ingredients to kickstart this epic into the spotlight, John Barber and Cullen Bunn’s intricately plotted storyline is captivating and exciting, the art by Fico Ossio and colors by Sebastian Cheng are stunning, and with REVOLUTION now set to spin-off into IDW’s forthcoming team series REVOLUTIONARIES by John Barber and Fico Ossio, this is just the beginning of the exciting times ahead for IDW’s and Hasbro’s excellent range of titles.