Review: Chapter 84 begins with Levi, Eren and Mikasa continuing to fight over who’s going to get the Titan serum – Armin or Erwin – and be brought back to life. As before Armin is still a charred corpse and Erwin has had a hole blown in him by a boulder.  Most of this chapter is dedicated to making a decision over the two whilst time is running out in their window of opportunity. We get a bit of words from everyone on the matter.

Eren talks about how Armin planned many of the Scouting Legion’s successful missions, as well as always wanted to see the ocean and because he fought so hard for that dream and did so much for the corp he deserves to survive. Whereas Levi counters with his faith in Erwin to lead the corp to victory of the Titans and discusses Erwin’s own dream to find out what is in Eren’s Dad’s basement that holds the secret to the Titans and the world that humans forgot.

Hanji believes Erwin should be given the Titan serum as well as well as does another Legion scout, Floch, who carried Erwin here to the safe sight to be given the serum upon realizing Erwin was still barely alive. The speech he gives on the matter is really silly. It starts out all uplifting and endearing but then turns into him calling Erwin and demon he believes only a demon can defeat the Beast Titan. You had me till then buddy. 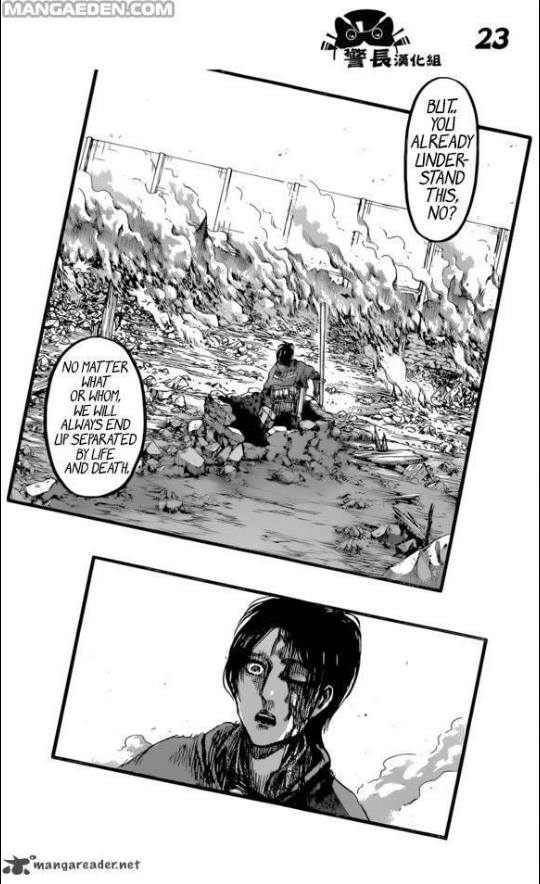 We find out how Hanji survived the explosion, one of the other survey corp members pushed her into a well just as the fire from the explosion consumed him. Leaving Hanji to crawl her way out of the well only to find everyone she cared for gone. With Hanji, Levi, Eren and Mikasa tensions do run rather high. And I totally get it. They’re being forced to choose between two generations of “heroes” and all four have their own feelings and stakes on the line.

If this was a generic shounen manga I could see every one of these characters choosing Armin without a doubt because “he’s the future” however after the decision is ultimately made I commend Isayama for allowing each character to retain their beliefs and feelings wholeheartedly. A decision like this cannot be presented as an easy one, thankfully Isayama doesn’t do that.

Ultimately Levi is left alone to make the decision and just as he is about to inject Erwin the near-dead commander pushes the serum back into Levi’s hands telling him to give the serum to Armin. It’s hard for Levi to see one of his best friends die yet again, but he follows his commander’s final order and next we see Armin turning into a Titan and devouring Bertolt – the colossal titan – finally bringing an end to that character. 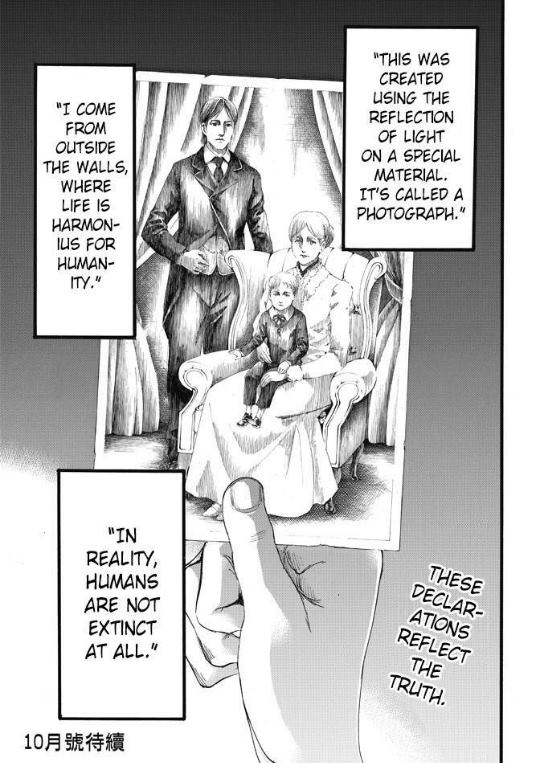 Overall not a bad chapter. I appreciated seeing tensions between the two generations running high because they all had a lot to lose in this situation. The biggest problem for me is the situation itself, Attack on Titan has never been the best series but it began strong by touting itself as a story where anyone could die. And  I liked that no one was safe. However as the series progressed the finality of death in these characters dropped relatively low to almost nonexistent. So when we were presented with the option of saving one of two important characters who had taken wounds that should have killed them immediately I just rolled my eyes and scoffed.

For what it was though, Isayama didn’t too terribly with the situation. It’s just not a situation I was wish we could have found ourselves in as the reader.

Chapters 85 then begins with Armin coming to after being given the Titan serum. Presumably he now has the power to turn into a Titan just like Eren does. His wounds have been healed and he’s back to normal with little to no memory of the most recent events in the series. Which makes sense given what his situation had been up until now.

The other corpsmen catch him up on how things have been going, and we learn that Levi “buried” Erwin under a still intact house by laying his body on in one of the rooms. In all honesty, that bit of information killed me. I have really liked Erwin and his relationship to Levi has been something to root for. To see him come so close to his goal and not make it was heartbreaking. In this Isayama wrote wonderfully.

But that’s not the biggest thing to come out of this issue. Finally, after 85 chapters – which isn’t terrible mind you – we finally get to know what secrets lay within’ Eren’s Father’s basement. And boy is it particularly interesting. Isayama does a good job showing how far both Mikasa and Eren have come by framing how they look now against how they looked in chapter 1 when the Colossal Titan cause the destruction of their home.

He then follows up by doing a nice little fake out for the reader by showcasing the key around Eren’s neck as not being the key to the basement, but instead the key to a hidden compartment hiding three books telling of the secret histories of the world. While we don’t get much this chapter what we do get is enough to peek my interesting in the matter.

After all this time I’ve wondered and wondered what more secrets could we possibly be getting and if they’d live up to the hype once we get them. It’s no secret that I haven’t been impressed with all of Isayama’s more recent revelations concerning the past. I was impressed with this one. We’ll have to see where it goes of course, but what we learn is that there are civilizations beyond these walls where humans are living harmoniously. Eren’s father coveted a photograph featuring a family dressed in luxury and does make sure to point out in his book notes that it’s not a painting like all of our heroes are used to.

For the first time in a very long time I’m excited to see where these new revelations go. I can’t wait to learn more about the humans beyond the wall.

Final Score: 4.5 Titan Revivals out of 5