The idea of cryptids, Bigfoot, Loch Ness, etc. has always been fascinating to people.  The fact that humans have searched through so many isolated areas of our Earth and still believe are a testament to the strength of the idea.  People are always coming up with new incarnations of the legends, and every so often a sighting happens and the fervor is once again ramped up.  Just when you think you’ve read every story about Nessie, a tentacle reaches out of the Loch and wraps you in it’s icy grip.

Ness #1 is the creation of Chris Welsh (Doc Dino, Blinded) and is another take on the legend.  The easiest way to describe it is the way the afterword does.  “Ceit is on a trip to Loch Ness to scatter the ashes of her late mother.  She arrives the morning after an old man meets his grisly fate on the shore killed by a nightmarish beast.  He was the final member of a local cult dedicated to keeping ghastly creatures in check, and which him and his kind now gone, the thing that lurk in the dark water and hide int eh surrounding hills are free to run riot…”  You really  don’t need to know much more than that as far as the plot goes.

The plot is great, simple, but great.  Welsh succeeds in making the community a character in the story just as much as the main Ceit and her friends, and the monsters themselves.  The peculiar nature of isolated communities lend themselves to blanket creepiness, just like we saw in the John Landis classic An American Werewolf in London.  There’s a scene in the comic that specifically reminded me of that point in the film when the two backpackers step into the noisy pub and it goes silent. 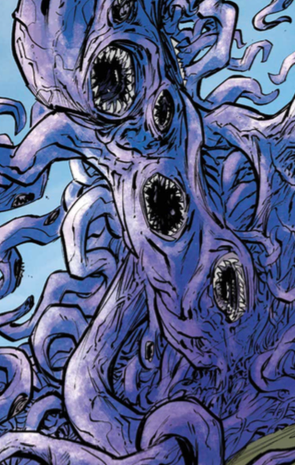 Art by Rob Carey (North Bend, The Life and Adventures of Sherlock Holmes) is great, kind of sketchy at points, which lends to the overall creepiness of the monsters and setting.  The creature design is great, and be warned, this is not your typical “long-necked dinosaur” the of Nessie.  This is a mouth-covered-tentacle creature that probes the corners of your nightmares with toothy sharpness.  Colors by Dee Cunniffe (The Wicked + The Divine) compliment his work nicely.

The book end with something of a cliffhanger, which is exactly how you want a first issue to end.  It completely leaves you wanting more.

Issue two?  How about that?  Well, as of this writing, the Kickstarter is two weeks away from closing and was already over it’s original goal and into stretch goals, so if you’d like to check that out, go to the link below.

All in all I really like Ness #1.  It brought the creepy back to cryptids, something that has been sorely lacking since I read the Mysteries of Unknown books when I was a kid.  Chris Welsh and company have already exceeded their initial need for issue two, and if they keep it up they should have no problem with funding for the rest of this series.

To support Ness #2 on Kickstarter