Over the many decades of city-leveling battles and victories against untold monstrous adversaries, Godzilla now faces his greatest challenge of all in this mammoth 120 page Trade Paper Back edition which collects the epic five-issue miniseries: Godzilla in Hell!

Godzilla’s voyage will see him encounter some of the most deadly creatures of all as he confronts the heinous tortures and machinations of hell, facing impossible odds and unimaginable horrors to prove that his is the King of the Monsters, on Earth, and in Hell!

Plunged into the darkest depths of Hell without warning, Godzilla must now traverse the deepest levels of this infernal realm, where the secret of Godzilla’s damnation awaits, get ready for the most extraordinary story of all time as Godzilla embarks on this twisted odyssey through the very bowels of Hell itself.

Just as each issue of this miniseries saw Godzilla entering a new level of the underworld to fight the impossible horrors of Hell, each issue in the series also had its own distinct style and tone. Godzilla in Hell and its rotating creative team of exceptional talent have brought Godzilla’s tumultuous adventure though Hell to life in spectacular fashion for this IDW miniseries, starting with the writer and artist James Stokoe (issue #1), returning to the character here for the first time here since his landmark miniseries, Godzilla: The Half Century War. Each issue of this five-part series also went on to featured a number of familiar names, including writer and artists Bob Eggleton (issue #2) and David Wachter on issue #5 (Wachter worked on the apocalyptic Godzilla: Cataclysm), Of the new writers to Godzilla, thereís Ulises Farinas and Erick Freitas on issue #3, with art by Buster Moody, and Brandon Seifert handles issue #4 with art by Ibrahim Moustafa. 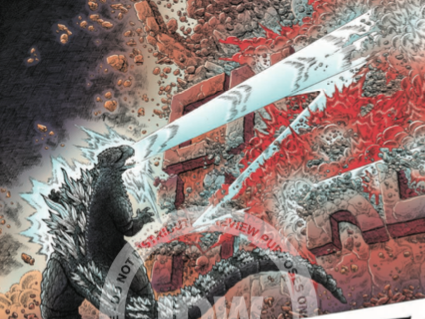 Each new level of Hell that Godzilla reaches brings with it even more dangerous encounters and revelations: from the breathtaking initial free-fall into Hell, Godzilla must venture though incredible settings, facing devilish atrocities, traveling across craggy landscapes were ancient cities claw at the feted sky,  past realms of fie and ice, though shipwrecked wastelands, and unfathomable ocean depths. As demonic incarnations of his greatest foes prepare to mount their attack, clues to what brought Godzilla to Hell spells for an uncanny rematch, with titanic battles on a grand scale, where a wall of living flesh, Destoroyah, King Ghidorah, and an unstoppable force must be vanquished if Godzilla is ever to find a way back to the living world. 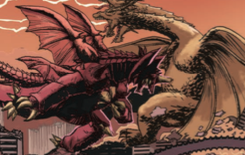 The team of writers and artists on this book have done some truly astounding work on this miniseries. Indeed, the various writing and artistic styles make this  unique take on the Godzilla franchise seem even more exciting and powerful, as Godzilla reaches each  new area of Hell, the shift in tone and style gives us a real sensation of  progress though the story, the sheer creativity and inventiveness is astonishing. The narrative pace of Godzilla in Hell is perhaps stronger in some issue than others, but the brilliant premise, together with stunning visuals and incredible action more than compensate for any minor quibbles.

Godzilla in Hell is a fabulous trade paperback collection. Godzilla fans are sure to enjoy this stunning series, in what is perhaps one of the most impressive and unusual Godzilla stories ever told. Add to this the added bonus here of a truly amazing cover galley, along with as the extra sketches and inspirations that made this series a reality, and you will be captivated by this saga which has been brought to you by some of the most talented writers and artist of our time. Godzilla in Hell presents Godzilla with a threat unlike anything we’ve ever seen before, it’s a worthy addition to any comic collection, and highly recommended!