Summary: Natsuo is a girl that has natural talent, so much so that everything she tries seem to come to her in a fashion that’s easier than riding a bike. This has caused much turmoil in his her life, she’s lost so much and it’s given her a sour outlook on the world and those who inhabit it. When she meets Yuzuko, a new transfer student who finally gives her a challenge in the form of MMA, this spurs Natsuo to put in all her effort to beat this girl. And thus Natsuo’s journey through MMA begins…

Review: This was another manga series recommended to me by a friend. And like Punpun I could’ve done a volume-by-volume review of this series, however being only 33 chapters I decided I’d just power through it and then bring all of you my thoughts

I’m glad I did because once I started it up I just couldn’t put it down. Teppu is an incredibly intriguing manga for many reasons and It’s also really good to boot. From its complete focus on women’s MMA to it’s incredibly respectful treatment of women as badasses who can through a knock-out punch – there is 0% fan-service in this series, these girls will literally kill you if you try to sneak a peek at them – to it’s portrayal of Natsuo as a sort of villain who you can’t help but root for.

The psych complexities Moare focuses on with Natsuo and those she has effected throughout her 16 year old life cannot be understated here as he blends many layers between the folds of the story. There is Natsuo’s broken relationship with her brother, her broken relationship with her once-best friend Sanae, her hatred for Yuzuko for being the first person to finally be better at her at something, and Natsuo’s own inferiority complex because she’s jealous of those who actually have to struggle to be good at something. 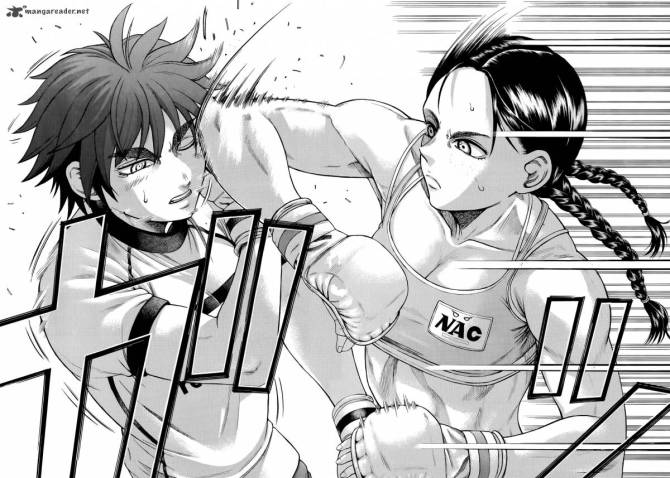 Natsuo quite literally plays the part of the villain for this series if you flipped the viewpoint around to Yuzuko’s P.O.V., however because of this it makes Natsuo that much more compelling as a hero. I found myself enthralled by Moare’s portrayal of this tall, lanky girl who was so naturally gifted that she made enemies everywhere she went, and yet all she wanted was to be normal just like all of them. But she can’t, because it’s a superpower she can’t turn off.

Now, unfortunately because there are so many subplots flying every which way in the background and with the series being the short length that it is, because we also have A LOT of characters in this series, by the time the story is over not everything Moare set into motion gets settled and even those events that cause Natsuo to become the way she is get rushed a bit in the finale.

However, the way Moare ends the series it almost feels like we don’t need to see those other subplots, that they weren’t really that important in the grand scheme of things, that Natsuo’s story is more or less complete and anything after that is just fluff that would exist because he wants it not because he needs it to. It is a very interesting dichotomy, because I walked away feeling satisfied by the end which not many authors can achieve when they don’t give themselves time to really bring closure to all their characters.

From just a narrative perspective, I think what Moare achieved here is superb. All the characters in this series have a force that drives them, they each have their goals and their fears, their achievements and their let downs. And I know there is STILL this feeling within the entertainment industry that women can’t be badass enough to carry stories, but really if anything proves them wrong it’s the incredibly down to Earth, street level brawl of a manga. Because there’s nothing really outlandish about it, over the top, or anything that gives the story a sort of fantasy element, this manga could easily be adapted into a Hollywood movie and it would probably do really, really well. Especially with the UFC crowd. 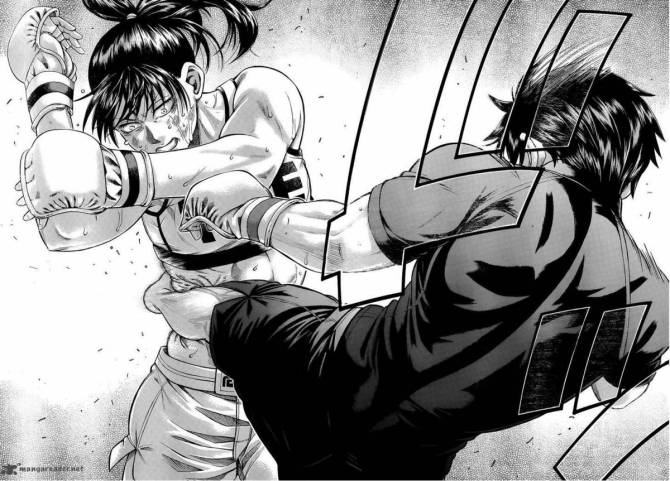 Let’s talk about the MMA in this manga, shall we? This series was recommended to me because currently I am reading a manhwa titled Girls of the Wild’s which also centers heavily around MMA, however it doesn’t generally go into a lot of depth of how MMA works and generally sees it’s characters fighting in their own styles while pitted against one another. Boxer vs. a Judo master, both doing their own style of moves against one another. Plus there’s a lot more to that series that lends itself fantasy elements even in the fighting.

None of that seeps into Teppu. Now, there are plenty of speed shots and power shots that are meant to help you understand the force these women are putting their attacks, but Moare makes it very clear throughout the manga that MMA is MMA, and whether you known Jiujitsu, Karate, or just street brawling, when you get in that ring, you fight MMA-style and leave your clear-cut style at home.

There are pages and pages strung throughout the series that go way in-depth into how MMA in Japan works, and gives you step-by-step instructions on how some basic moves work so that you get the gist of what’s going on the story which then in turn allows you to enjoy the fights even more. Moare is clearly a fan of this sport and has down his research into how everything is supposed to work. Even down to the padding the girls wear that is generally drawn in as much detail as anything else this series offers.

Which, by the way, this manga has beautiful art as well. If you didn’t think it couldn’t get any better. Never does it feel like Moare skimps on the details, like I mentioned earlier even going so far as to detail the padding and sponsorship wear these women adorn themselves with in the ring. The action is fluid, and all the girls look like real people. All dressed and pampered in their own way, older women looking older, younger women look younger. And the haircuts that allow for some of the characters to feel indistinguishable from men which in reality there are plenty of women like that.

Every which way I turned I felt myself appreciating this series more and more for its attention to detail within its art, its portrayal of MMA as an actual sport, the rich cast of characters as well the different personalities of each and every one of them, Natsuo’s journey to finally feel happy because for once in her life she actually had to work at something.

This series is quite compelling. And like I said, though the ending can feel rather rushed, dropping some of the subplots created by other supporting characters, it doesn’t feel unsatisfying either. At 33 chapters Teppu does exactly what it planned to do and doesn’t overstay its welcome. If we were to ever get more from this series I would be very happy, but if we didn’t I’d also remain very happy.

If you like MMA, if you like interesting characters, if you like stories that focus on something different for a change, then I definitely recommend you check this manga out. Unfortunately it’s not licensed in North America but you can find scanlations online – even though I’d love to tell you to go out and buy it, it’s still a rather unknown series at this point. It was to me before I started reading it.