Comic creator Ben Jelter comes from my wheelhouse.  He grew up in the late eighties and nineties, and watched a lot of animation.  Just look at his most current work, Heliosphere, and you’ll see what I mean.  He’s got credits as well, with previous projects Moscow 38 and The Tumor.

Heliosphere is a webcomic that Jelter is in the last days of Kickstarting into a printed comic.  It’s based on a future where body modification is the norm.  Where cyborg gangs terrorize the city.  Where each and every person is under the rule of brain-enhanced creatures.  It’s fantastic.

Maya and her brother recently lost their father, an inventor, who left them the most amazing technology in a storage unit.  A time machine.  Thanks to Maya’s know-how it is up and running.  She travels to the future.  Easy peasy right?  Nope.  After a bit of bouncing around, she literally lands on Synth, an android with human modifications, and the resulting rip in time causes an explosion that rips part of Synth’s face off.  Crazy adventures ensue. 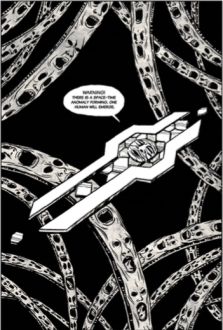 I love finding this kind of stuff.  The webcomic medium is one that has exploded in the last ten years, and you find more people willing to publish a page a week, like Jelter has done, for free.  This also gives the artist the time to compile a bunch of pages, a more complete look at the story, before pitching to publishers or attempting a crowd-funded print run.  It’s interesting to see the process as it unfolds while you’re reading this, knowing that it was released a week at a time.  You see subtle changes in the art as Jelter comes to better know his characters and explore the world they inhabit.

And what a world it is.  I had bizarre moments of recall as I read this.

I thought of Dark City and that weird Mark Twain claymation about the devil called “The Mysterious Stranger”. (If you haven’t watched it, YouTube etc, and I apologize for the nightmares.)  Night of the Creeps plays heavily in the plot.  There was certainly heavy moments of Akira and other anime, Terry Gilliam films like Brazil and 12 Monkeys, and The Matrix.  So much of what I watched in the genre of sci-fi is encompassed in this book.

The story is strong and left me hanging right at a good part, but that’s what this Kickstarter is going to try to amend.  The inclusion of futuristic slang with asterisks might have burdened the story, but the way they were incorporated into the page felt natural.  The story follows Maya as her thoughts about the future are challenged and changed, and deals with our shattered expectations in what we believe is true.  And there’s a lot of action in there as well, with robot fights.  Who doesn’t love robot fights?

With Heliosphere, Ben Jelter allows us to recall a ton of cool stuff we grew up on thrown together in a new and unexpected way.  Any of those popular films and tv shows can be linked in this, all wrapped in a bio punk future.

To read page by page, week by week, the adventures in the Heliosphere, go to