Marcus Tullius Cicero said, “The contemplation of celestial things will make a man both speak and think more sublimely and magnificently when he descends to human affairs.”

Writer and cover artist of Image Comics’ Southern Cross, Becky Cloonan (Gotham Academy) and artist Andy Belanger seem to have taken this sentiment to heart.  Their work on Southern Cross is not just magnificently executed, but has the powerful impact of an upper cut to your cerebral cortex.

The melding of strong story structure mixed with sex, drugs, and rock ‘n’ roll makes this an entertaining experience for readers.

Southern Cross Vol. 1 is a sci-fi horror comic, collecting issues 1-6, about Alex Braith, a troubled woman aboard the Southern Cross tanker flight 73 to Titan.  She has been tasked to bring her dead sister’s body back from the refinery moon, but because of the mysterious circumstance surrounding the death, she also wants answers.  The voyage finds Braith entangled in more than she bargained for when her cabin mate disappears, and she is spiraled into a nightmare of cover-ups, murder, and a suspicious crew that is shrouded in secrecy. 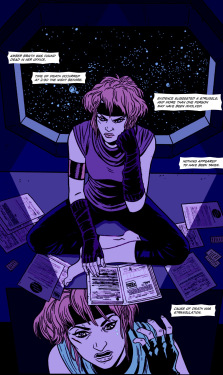 Becky Cloonan, writer and cover artist, delivers a well constructed story that hooks you from the beginning.  The tension aboard the Southern Cross is well paced, and delivers with a climactic ending that leaves you satisfied and nodding your head, ‘yes, this was a fun and interesting way to spend an hour.’

The story is not just fun junk food, sci-fi horror; it delves into themes of sibling relationships, moral relativism, and death.  What’s great about this comic is that you get the initial fulfillment of a good mystery story, along with content that has your brain processing deeper meaning to the story.

Southern Cross has the feel of Agatha Christie’s Murder on the Orient Express with an acid rock soundtrack; Hercule Poirot sleuthing to the psychedelic guitar riffs of Clapton or Robby Krieger.  It’s an interesting mix, and it works.

What also works is the art. Good gravy does Andy Belanger give us something special with the art in Southern Cross. 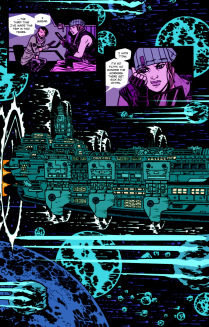 The whole book is on a ship in space, but you never feel claustrophobic.  Space is never forgotten, we are constantly reminded of that with the layouts and windows smartly placed in the art, showing the vastness and beauty of it.  It really becomes a character of its own.

The elaborate care taken on the Southern Cross ship, and minute detail displayed throughout this book is reminiscent of Jack Kirby.  Please understand, I do not say Kirby lightly, but the epic and detailed art of the outside shots of the ship echo his style.

What’s crazy about the art though, is that mixed in with this Kirby-esque art, in certain parts when called for, is trippy Alex Grey type of panels.  Bottom line, you get so much more than you pay for with this book.  It’s quite impressive. 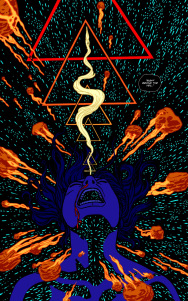 Overall, Southern Cross is a flat out winner.  The creative team did a great job, and I’m glad this is an ongoing series.  It’s fun, smart, horrifying, and captivating on all fronts.  At $7.99 Digital and $9.99 Print.  It’s a no brainer…GET IT!