Ghostbusters is a property that, for fans, is sacred.  There are few people outside of the original writers and director that fans trust with their favorite characters.  (Exhibit A - I’ll call it the “Ghostbuster Reboot Storm of Hate”)  I’m all for reboots, reimagining, and sequels, as long as their well done and stay true to the essence of the characters and the main gist of the original story.

Erik Burnham writes from a place of love and understanding.  He writes from the lofty heights of “super fandom”, and he does so in such a way that makes his run on Ghostbusters something that all fans should be reading.  His knowledge of the universe is such that when he adds new elements, characters etc., it forms a seamless transition.

Since he took the reins in 2011, Burnham has sprinkled tidbits of Ghostbuster lore into each story.  He has spiced the mixture with things that fans notice and approve of wholeheartedly, but most importantly he has stayed true to the characters.

In the newest arc, Ghostbusters International #1, the boys in grey are dealing with the destruction of the firehouse and the return of Janine after she was teleported across the globe by a god named Proteus.  Now, everything is returning to normal, when Ray visits a very familiar looking psychic.  (More on this in the art section.)

This is a set up book.  Egon is out of active duty thanks to an acid burn, Ray is off checking out psychics, and then the Ghostbusters get an offer from the pumped up Norwegian version of Walter Peck, an offer to buy the company.  It’s the perfect lead in for a second issue, with all of the parts in chaos and the future up in the air.

I don’t want anyone else to ever draw the Ghostbusters.  Ever.  Take a note Mr. (or Ms.) President of Comic Books.  Ever.  I mean it. 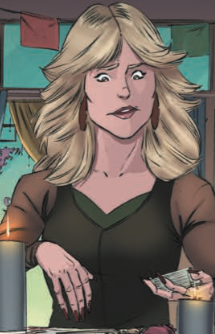 Dan Schoening’s work on this book is the perfect blend of cartoon and realism.  He captures not just the look of the original characters, but somehow manages to capture the feel of those characters as well.  These are loose caricatures as far as the likenesses go.  Except when he really wants to tweak that nostalgia nerve.  Like with the psychic mentioned previously.  This is a perfect example of why Burnham and Schoening are such a great team.  The psychic looks remarkably like Jennifer Runyon from the first film.  (Reminder for non-uber fans…Runyon was the girl in the “psychic test” with Dr. Venkman at the beginning of the film.)  They never come right out and say it, but it sure does look like her.  It’s a great little throwback, and one that is typical of the kind of work that this team does on the regular in this title.

Ghostbusters International #1 will be great.  It’s just the kind of work that I’ve come to expect (not fair, but that’s how it is) from this team.  You can tell how much they care about the property, and how much they love working on these characters that so influenced my likes as a kid.

Keep it up Schoening and Burnham, you’ve got this in the bag.