Its time to trust no one and tape an X to your window as IDW’s outstanding X-Files comic book series builds towards Season 11’s startling finale! Mulder and Scully must confront the fact that Gibson Praise’s master plan could become a reality in The X-Files Season 11 #6, but how can they stop him, and will they choose to? Endgames, part 1 of (3) begins here, as Mulder and Scully face their greatest challenge since the X-Files began!

Following the events of The X-Files 2015 X-Mas Special, which provided Mulder with further insight into Gibson’s scheme, including his conflict with the faceless alien rebels, it also reunited Mulder with Scully and the Lone Gunmen. Now in The X-Files Season 11 #6, writer Joe Harris deals with the ramifications of that issue as Gibson Praise prepares to instigate the finale stages of his grand design. Gibson’s tremendous power and influence is everywhere, however, with some help from the Lone Gunmen Mulder and Scully are finally able to deduce the significance of the uncanny parting gift from Gibson Praise.

Right from the first few pages, Endgames Part 1 propels the mythology of the X-Files in an entirely new direction. Joe Harris manages to catch us off guard with an unexpected curve ball here, its one that sends us along the darkest of highways to Armageddon, with Mulder’s quest to confront Gibson becoming a ruthless game of chess like no other played before, since, or probably ever again, as the inheritors and collaborators move poison pawns across the board and Mulder finally realizes the horrific truth about what he has done.

Once you pick you jaw up off the floor after these incredible opening scenes The X-Files Season 11 #6 hits the ground running, quickly rejoining Mulder and Scully in Blackfoot County, Idaho, as Bryers, Frohike, and Langly bring everyone up to speed with what they discovered on the audio tape Gibson left for Mulder. Although the Lone Gunmen only feature briefly, their contribution proves to be as invaluable as ever. Soon the readings collected by British astronomers in 1967, the medic satellite fragment, and some strange hidden markings all point to a top secret storehouse that isn’t supposed to exist - and a trip to Utah for Mulder and Scully.

Matthew Dow Smith’s artwork for this series always impresses, and this issue is a real stunner. The opening sequence itself is a breathtaking master class in brooding atmosphere, characterization, and pure edge of the seat drama. The striking imagery that Matthew Dow Smith conjures up for these panoramic vistas of Washington are mesmerizing in their stark, unflinching clarity, portraying a world that has faced its ultimate baptism of fire, before events move to the Mount Weather Complex in Virginia, and Mulder’s world shattering face-off with Gibson Praise. Its all spellbinding stuff, but its not quite the end of the world as we know it, not yet anyway, and the seamless transition as we rejoin Mulder, Scully, and the Lone Gunmen in Idaho doesn’t jar in the slightest.

If anything, this actually makes this issue of Season 11 even more engrossing. You will be left pondering over several key moments as Endgames Part 1 truly begins in earnest with Joe Harris keeping us guessing while the narrative winds its long, temporal path though our imagination, while Matthew Dow Smith’s concisely structured page layouts effortlessly conveys every nuance and plot development Harris has devised - and it is this loving attention to detail, pacing, atmosphere, and characterization which enables this comic book series to sublimely reflect the exact same tone and style so characteristic of the very best X-Files TV episodes. 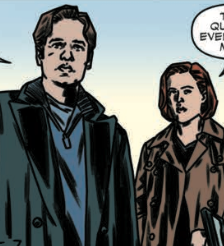 Jordie Bellaire’s colors are equally as glorious, from the grim, dark red and brown tones of those wonderfully crafted early scenes, Bellaire’s work really shines, and the contrast between settings is all the more striking when events in this issue lead Mulder and Scully - now posing as contractors - to Camp Williams in Bluffdale, Utah, and the bleakness of the vast desert landscape which the mysterious facility resides in.

This issue of the X-Files also sees Mulder and Scully encountering two freelance reporters, Kelsey and Brandon, who are searching for the real story beyond the media safe line. As Mulder and Kelsey set out to find out why a data center in the desert is pumping out so much water, it seems that Gibson’s influence is never too far away from Mulder, and Scully also finds danger as the issue builds towards its nerve jangling climax.

The X-Files Season 11 #6 is another brilliant issue of this IDW comic book series. With its superb story by Joe Harris and excellent artwork by Matthew Dow Smith, this X-Files series constantly exceeds all expectations, the characterization of Mulder, Scully, and the Lone Gunmen are a joy to behold, and the complex story-arc successfully complements and builds on the X-Files already extensive mythology perfectly. This issue features an amazingly iconic looking, dark, and moody cover by Menton 3, then we have a Fox Mulder photo variant cover, and there’s also an eye catching variant by Robert Hack and Stephen Downer.

Even though The X-Files Season 11 concludes in March, we wont have that long to wait for more X-Files comics from IDW. Indeed, March 2016 also sees the release of the one shot special The X-Files Deviations, which features an alternative timeline story where Fox Mulder was abducted as a child instead of his sister, Samantha, by writer Amy Chu (Poison Ivy: Cycle of Life and Death) and artists Elena Casagrande and Silvia Califon (The X-Files Season 10 issue 6 & 7), and in April Joe Harris, Matthew Dow Smith, and Jordie Bellaire are back to continue Mulder and Scully’s adventures with IDW’s brand new The X-Files ongoing comic book series spinning out of the new X-Files TV event! It’s never been a better time to an X-Files fan; with Mulder and Scully back on TV in FOX’s new event series, along with The X-Files Season 11 comic book series, and the new X-Files ongoing series from IDW, the truth is well and truly out there!