Summary: Years before the Titan attacks that would begin the adventures of Eren Yeager, there was Levi. A street rat from the underground with abnormally high skill using the 3D Maneuvering Gear, equipment he stole from the Military. Hunted by Erwin of the Scouting Legion, and facing a choice that will create the man we know today, what decision will Levi make? There are no regrets in this world where the caged fight for the wings of freedom.

Review: To be fair, I’m not sure how many people actually clamored for a Levi origin story. He was just the really cool, really clean dude from the show who gave Eren a hard time and it was also really, sorta awesome to see him fight in Titan battles.

However, I like Levi enough that if you do give me an origin story chances are I’m going to eat it right up. What No Regrets gives us is a unique insight into a broken man who has made every choice in life he can think of and each one has just ended in ruin one after another. This life had hardened him, and created a myth around the underground of a man who takes no crap from anyone and you will back down immediately if you come across him.

None of us think of Levi as a human killer, but he is definitely not above it. Qualities he displayed in the original Attack on Titan manga are brought over to this series as Levi spends the entire series plotting to kill Erwin for being the first person to not only best him in combat in awhile, but also swindle him and his friends into joining the Scouting Legion based off of their self-taught 3DMG skills.

This is the most unique insights in Levi and Erwin’s history as two men who highly respect one another started out as the complete opposite. Without giving too much away there is definitely an under layer of espionage tied to why Erwin wants Levi and friends for the Scouts. He was not always the honorable man we came to know in Isayama Hajime’s main title.

Both of their decisions lead to many lives being lost by the end of this short series, but their decisions also create an interesting dichotomy about the world around them. Do men such as them make the decisions they do because they are bad people, or because they are both desperately caged, trapped in this world by those who would crush them? In Levi’s case, the nobles that live above the underground, and for Erwin the Titans that placed mankind in this hopeless survival situation 100 years ago? 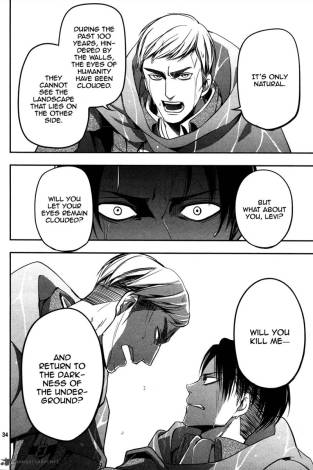 If you know what happens to both characters in the main series, this question doesn’t stick to the wall as hard as it does if you didn’t, however the question is still valid regardless of whether you read the original series or not. And honestly, if you’re reading this you’re probably reading the original series.

Speaking of Levi’s friends, Isabel and Farlan, these two have a very nice relationship with Levi in the fact that all 3 of them together treat on another like equals and also like family. To Isabel, both of them are her brothers though none of them are blood related. She’s also very full of spunk and spirit as someone who recognizes that she isn’t very smart, but that is mostly because in the underground it was more important to feed yourself than to educate yourself.

Farlan is like a more spirited Levi, someone who knows what he wants and knows how to get it, but displays a lot more emotion than the titular anti-hero. Farlan is smart and educated much like Levi, and even used to be the leader of his own gang.  But as their friends all died off from crime or disease or starvation Farlan found himself eventually gravitating towards the myth.

It’s not much to deduce that these characters die as they’re not present anywhere in the main AoT series, however their fates end up creating a strange mirror effect for Levi who even in the main series had surrounded himself with good, talented people for friends and in the end ended up losing all of them as well. Levi may be destined to be alone, the lone hero of the Military, and because of this realization it’s no wonder he chooses to live with no regrets.

This series is classified as a “shoujo” for being published in a shoujo magazine in Japan and incorporating a more adult shoujo art style, however I see no reason to keep this series classified as under the shonen banner. Though I really like the art style used in this series, everything looks so sleek and kinetic as opposed to Hajime’s grungy and static art style, the story feels no different than a regular Attack on Titan arc fitting it nicely into the canon in which it was spawned from.

I really enjoyed Birth of Levi, and even though it’s been a year since I originally promised you all this review I’m just glad I finally got to write it. If you’re a fan of Attack on Titan and you haven’t checked this out, do yourself a  favor and do so. If anything it’s a fun little read, and if it’s anything more it’s a great read.

Final Score: 4 Difficult Choices out of 5