Story and Art by Daniel Bayliss

Leave it to Jim Henson to make something twenty years ago that is still awesome and brilliant today.

In the late 80’s kids were enraptured with all things Muppet, and The Storyteller was no different.  A couple of years ago Boom! Studios acquired Archaia Studios, and with it came all of the Jim Henson projects.  Jim Henson’s The Storyteller: Dragons #1 is another triumph on behalf of the publisher, and a tribute to Henson’s legacy.

The Storyteller, for those who don’t know, was a television show that aired in 1987, written by Jim Henson and Brian Minghella, that was based around a man telling stories to his dog.  The man, played by John Hurt, would sit in front of a fire, have a short repartee with his sarcastic pooch, and then launch into a tale usually based on a European folktale.  The story would then be performed by any number of actors and puppeteers, with Hurt breaking the action long enough to remind kids that this was still a story.

In the comic series, Daniel Bayliss, with script writing done by Fabian Rangel Jr., recreates that perfectly.  This new series from the Storyteller archives is called Dragons, and centers around just that.  The first issue is titled “Son of the Serpent”.  It’s based in Native American folklore and follows the timeless story of a father and son on a voyage that goes horribly wrong. 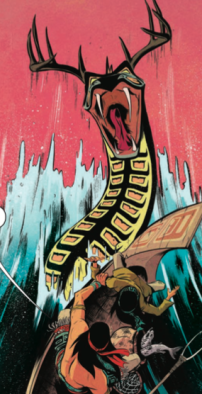 The father and son are on a fishing trip.  Father teaching his son what he will need to learn to survive in the world, the son not really wanting to take the mantle of being a grown up yet, when they come upon a horned serpent, a creature with the body of a snake but the need of a deer.  (And very toothsome as well.)  The creature seems intent on their destruction when they are saved by thunderbirds, enemies of the serpent, who engage in a fierce battle which separates the father and son.  Dad is washed up on the island of the serpent.  Son is elsewhere.  And…commercial break.  Can’t spoil it now, what would be the point of that?  You have to go and buy it.

Bayliss really captures the feel of the show, both through his writing and his art.  The Storyteller character has that even twinkle in his eye that John Hurt had and his banters back and forth with his canine companion makes you feel like you’ve just enough commercial break to run to the kitchen for a bowl of cereal.  His artwork is fantastic, with the strong native design coming through in the look of the thunderbirds and the horned serpent.

The truth of the matter is, that I’ll buy anything once that has the Jim Henson name on it.  But continue to fill that something with the great work of people like Daniel Bayliss and Fabian Rangel Jr., and I’ll keep buying it again and again.  Bayliss’ story is pure Henson, it gets you in the moral center, and keeps you there.  Dads are good guys.  Sons are dutiful.  The actions people take have consequences.  These are all themes that Henson pushed in his own work.  The Storyteller: Dragons #1 is a continuation of Henson’s legacy in the the best way possible, built on fantastic storytelling.