Story and Art by Nathan Pride

Like those long ago days when I’d curl up in front of the television to watch my favorite program, another issue of Jim Henson’s The Storyteller: Dragons is once again up from grabs at your local shop.

Like those days it’s another Henson-esque issue that brings the morality tale down to a level that kids can appreciate while keeping the story entertaining enough for any age audience. 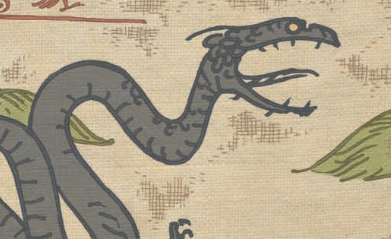 John Lambton is the typical brash young hero.  Raised in privilege and unheeding to anyone that would tell him differently, he fishes on the Sabbath and pulls a worm from the river.  He throws it in a well and leaves the kingdom, hoping to make his way in the world.  The story goes typically badly, with the worm growing, escaping the well and terrorizing the country, then growing so large that it essentially holds the people hostage.

John finally returns and finds the damage he had wrought in his youth, vowing to fix it.  He consults an oracle, who gives him the key to the serpent’s demise, and casts the fatal die in the story.

Nathan Pride has done a fine job with the story, building a solid fairy tale, hitting all of the major points.  The son with a bad attitude returns after several years of hardening up and has to deal with the folly of his youth.  It’s a theme that is constant through folktales and in this book feels old and new at the same time.  Like most folktales (and anthology television) there is very little focus on building deep characters, there just isn’t time in one comic to make you really feel for the character.  What they’re going for here is the moralistic style tale that you remember from your childhood, and it is a success. 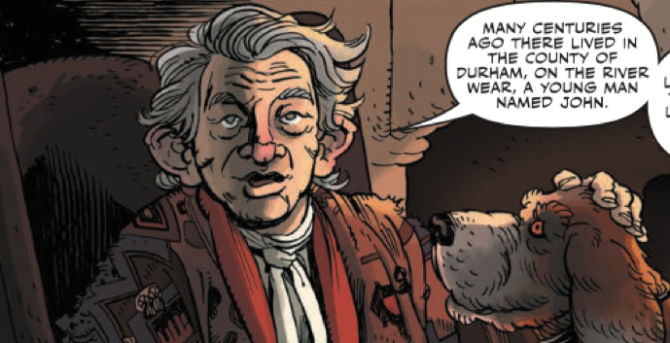 Pride also does the art, which is on level with everything else I’ve seen from Archaia.  He manages to capture that folk-art feel that much of Henson’s productions had, from the look of the Storyteller himself, to that of the worm.  It was drawn in a way that makes you think it could have been done for the small screen, that these are storyboards for something else.  Cassie Kelly’s colors are great, and compliment the inks nicely.  There’s something about the way she colors it, perhaps it’s a subdued use of tone, that makes it feel like I could be watching this on my old Sylvania television.  (No remote folks, but it did have a red digital display, and I thought that was amazing.)

Jim Henson’s Storyteller’s:Dragons #2 continues the Archaia tradition of fantastic books done by creators I’ve not often seen.  Their work is reflective of what I love to see coming out, old ideas with new spin, and it’s work like this that shows how much Jim Henson affected me personally, and a generation who grew up with his ideas floating around our televisions.