Created and Written by John Allison

One can’t be involved in the world of comic book fandom, trudging through weather to get your new books and chat with the regulars, without getting that one person who slaps you on the back and thrusts a book into your face saying, “you gotta read this.”

Ok.  So it hasn’t been quite like that for me, but I have seen Giant Days pointed to several times, the pointers talking in awed tones about how great it is.

Boom! Box has released the first five issues in a collection, Giant Days Vol. 1, out last week.  All of those people were right.  I’m behind on a book again, but it’s going to be so great to catch up. 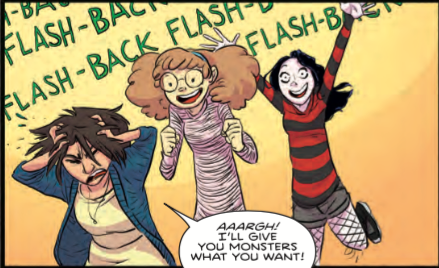 Giant Days follows the college misadventures of Susan, Esther, and Daisy, friends and roommates.  Susan is a practical, no nonsense leader, Ester is the focal point for all matter of drama, and Daisy is the confused brainiac.  It’s a grouping that we can see in probably most college-buddy movies, but this time it’s focused on a woman’s p.o.v.

The first four issues contained herein follow the group just as McGraw, Susan’s unrequited love, transfers onto campus.  What results is the hilariousness that can only come from extreme pain, feminist pamphlets and unexpected celebrity. 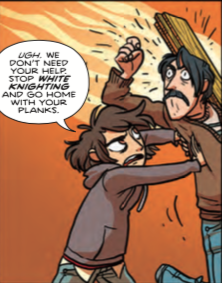 What I love about the writing on this book is that John Allison doesn’t take it too seriously.  Allison (Expecting to Fly, That) easily captures the humorous nature of that age, that late-ten awkwardness, that older people can look back on and giggle at.  I don’t think that it’s gender-specific, although the main characters are all female I still found myself connecting with them, remembering similar feelings when I was that age.  He nearly breaks the fourth wall, pushes at it and bends it severely, but never breaks it.  This book knows what it is, a combination comedy and drama.  It covers those difficult feelings we have as we become adults.  Friends breaking away into new friendships, old loves that we can’t seem to kick, and the heartache that comes with the realization that you aren’t the person you thought you were.  It’s a beautiful tale all through. 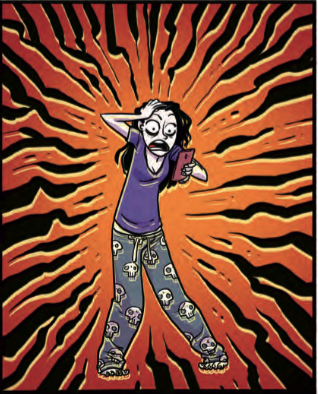 Lissa Treiman’s art ranges from animation studio to Adventure Time.  I love the way she can capture emotion with the exaggerated movements of her characters.  I guess that really is the best word for what I like about this art, it’s the movement.  The slump-shouldered McGraw exudes a sense of hipster-cool, while the slime ball frat boys lounge about, profiting off of others.  Treiman helps to captures the little neurosis that make young adulthood so horrible, while creating some really beautiful moments between friends.

Giant Days is certainly a book that will strike a chord with readers of a certain age.  I found myself laughing out loud while reading, and that doesn’t happen as often as I wish it would on the regular.  John Allison not only captures the feel of those late-teen years, but I think helps to build a new crop of strong female characters that will continue to entertain.  Lissa Treiman’s art wraps the whole package in a beautiful bow.