After reading issue #1 of this 7-part mini-series I was pumped for issue #2. In issue #1 the writing was spot on. The art and coloring was fantastic. The back to basics approach to the Sherlock Holmes mythos was what I wanted from this comic. Sadly, after reading #2 I feel like I’ve had an emotional setback from being “all in” on this book. 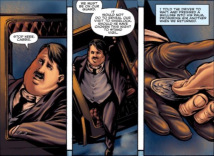 We start out with Watson and Sherlock’s brother Mycroft plotting to get Holmes to Vienna to see a specialist about his drug problem. With Sherlock Holmes’ growing paranoia, due to his cocaine habit, this seems to be the only solution. Mycroft suggests the only way to get him to Vienna is to get, the seemingly stalked, Moriarty to go to Vienna. This sets in motion the events of this issue; getting Holmes to Vienna.

When Watson and Mycroft get to Moriarty’s residence to explain their plan they find Sherlock waiting outside. They eventually find their way in and Moriarty agrees to leave for Vienna.

At this point, Sherlock sleuths his way to Vienna with Watson and we finally meet up with…Sigmund Freud! Finally, we get what we have been promised from the beginning.

This should have been great, yet this did nothing for me. After being welcomed into the world of Sherlock Holmes in issue #1 I felt like issue #2 had only left me sitting in Dr. Freud’s waiting room.

It’s hard to be too critical of an already established story that is being adapted to another medium, but I was completely unmoved by this issue. The only thing that got my through was the continued stellar art and coloring of Joseph and Escuin, respectively (although at some points it looked like Mycroft was sporting a massive throat goiter). He is known for being hefty though, so maybe that works. Not an issue though, I loved this book visually.

I understand that a take on Holmes that is not an action packed, Guy Richie style concept isn’t intended to be exciting from front to back. This being said, if you go that way you’d better dang sure hook me with interesting dialogue and character building. I was given nothing but a foolish looking Holmes and a feeling that nothing was happening except moving from point A to point B.

The story has an interesting premise and a great deal of underlying psychological angles to explore, but at least in this issue they were untouched. I really think that was a mistake. Get us from point A to point B, but get us there while unearthing something interesting and growing the emotional attachment the reader has to the characters.

With a 7-part mini-series you have room for a slow burn, but I’m afraid the casual stroll through this issue has killed the momentum of a great first issue.

The positive is that we have gotten all the ducks in a row to jump into the meat of the series; the interaction of Holmes and Freud.

The story can be turned around and it’s hard judging too concretely just one piece of a larger puzzle until it is all put together. I’m rooting for this mini-series to work, but I’ve lost some of my luster for it. Bring me back Tipton brothers, I want to love this.