Colors by Andre May

New series are a mixed bag. The first issue comes out, and you’ve no clue weather or not to take that chance to add it to your pull, or wait and try to hunt for back issues. Reviews are a dime a dozen, bias and personal to the reviewer him or herself. Really, only time can test a concept, only readers will make a book a success. But there are things to look for in a first issue that could let a reader believe that it will be around a long time.

The Spire #1 from Boom! Studios comes out this week, and has the earmarks of interesting all over it. Written by Simon Spurrier (Crossed, Disenchanted) this book takes that first issue chance and runs with it, through a maze of a city, past criminals and “skews”. At its core it’s a sci-fi mystery, a crime drama on a planet either far away or far in the future. 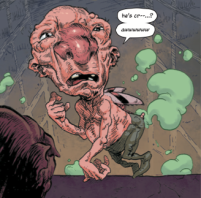 Spurrier cleverly uses the setting to help with some of the exposition, dropping chunks of it here and there throughout the big chase scene, giving us just enough to begin building the world in our minds. As with all new worlds there are obstacles, but this one seems disturbingly familiar. Social inequalities based on race and breeding are just as applicable in this story as they are in the real world, and form the core of the story. 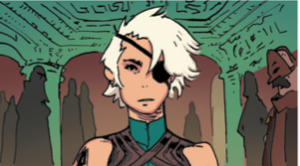 The main character is Sha, Commander of the City Watch, caught in between the people she works for and the ones she is trying to protect. Hers is not an enviable position, but she is a sympathetic character who has more in common with the commoners than with the rulers, those in the Spire, the central tower of the city. A death and a murder spur this story on and Sha is caught in the middle, trying to solve the murder and hoping to stay ahead of the chaos caused by the death.

Jeff Stokely illustrates this story. If you’re not familiar with is work, check out Translucid and Six-Gun Gorilla, both great books. His style is not classically comic, not the sleek art you see out of the bigger houses, but in this case I love the way it looks in this book. There are shades of manga and anime in his art, but also an inherent weirdness that helps convey the strange creatures that Spurrier has created in the story. It’s a pairing that works perfectly for the book.

The Spire is a murder mystery, a sci-fi book that launches into its first issue in the best way possible, with Spurrier and Stokely bringing you deep into the story and explaining enough to whet your appetite without gorging on exposition.