In March 1960 the world saw their favorite heroes combine on the pages of Brave and the Bold #28 to form the “Justice League of America.” Together, Wonder Woman, Flash, Green Lantern, and Aquaman – Batman and Superman were otherwise engaged – worked together to stop the alien Starro. From that moment on, the Justice League was known as the world’s greatest heroes.

In October 1980 DC Comics Presents #26 introduced the world to the New Teen Titans. Bring together Robin (Dick Grayson), Wonder Girl (Donna Troy), Kid Flash (Wally West), and former Doom Patrol member Beast Boy (currently going by Changeling), with newbies Raven, Starfire, and Cyborg to save the world from an unknown threat (later revealed to be Trigon the Terrible). Together they learned how to one day take their mentors places. In the early 2000’s, DC brought us animated TV series including Justice League (2001 – 2004) and Teen Titans (2003 – 2006). Finally, in 2011 DC Comics revamped all their comics. One of the changes this revamp brought was Cyborg joining the Justice League. Now you are probably wondering why the history lesson. Well, because on March 29, 2016 DC premiered it’s latest direct-to-video animated superhero film Justice League VS Teen Titans. A movie that combined elements from all the above mentioned events. 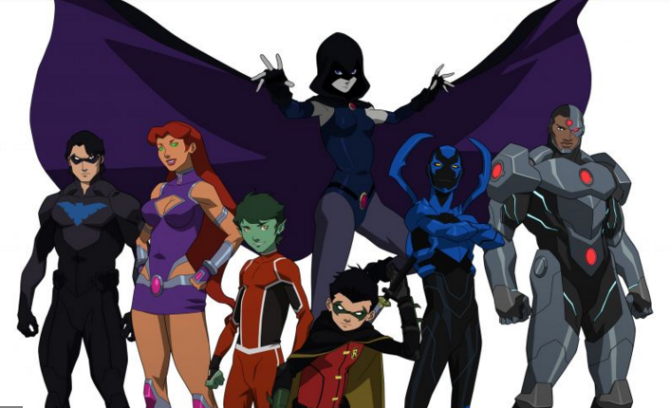 For those of you who don’t know, the “Teen Titans” is my favorite comic series, and Raven is my favorite superhero. So when I learned they were going to make this movie, I was both excited and nervous to see how they characters and story line – Trigon is coming to take over the earth – was going to be betrayed. And I am happy to say it was well executed.  Taking the strengths of all their character/team incarnations and combining them, truly made for a thrilling movie. For example, the Justice League team is made up of Superman, Batman, Wonder Woman, Flash, and Cyborg and the Teen Titans is made up of Starfire, as the adult mentor, and Raven, Beast Boy, Blue Beetle (Jaime Reyes), and Robin (Damian Wayne) as the teenagers. These team interpretations are a combination of different comic decades, taking their strongest members and putting them all on one team. A decision that was well made. This decision was similarly made for the characters.

Lets take Raven (as she is my favorite) as the example. Seeing as she is younger in the movie than in the comics, the dress she wears for a uniform was not an appropriate costume for her. What is an appropriate costume is what the TV incarnation of Raven wears. So just add tights, and you have Raven’s uniform. She also sports the shorter haircut of her television incarnation, but her hair is black, like her comic self.  And her personality is also a well-blended combination of the comics and television show. Like her television counterpart, she is a bit more reserved, not telling her teammates about her father until she can’t keep the secret anymore. But like her comic incarnation, she shows a bit more emotions and takes a liking to Damian Wane (though liking in a very different way than her older self in the comics).

Another element that DC did well in this movie, is their Easter eggs. For example Nightwing makes two small appearances. The first time is to drop Robin off with the Titans. This scene mirrors the one in the comics, when Dick had the roll of Batman and didn’t know what else to do with an out of control Damian, who was Robin. Another great Easter egg is between Kory (Starfire out of costume) and Dick. The two of them are video chatting, and allude to their past relationship. But instead of Starfire pining away for an uninterested Nightwing, their rolls are reversed. While the scenes aren’t that important to the story line of the movie (well Robin needed to get to Titans Tower, but who took him doesn’t really matter), these scenes are fun for fans to watch  - which makes the movie connect more with its viewers.

And finally, what truly made this movie a great one was the way they stayed true to their characters.  There were two scenes that truly stood out to me as, “I one hundred percent believe those characters would have that conversation.” The first time was between Robin and Starfire. Robin is questioning Starfire about Raven’s past, to which Starfire says, “You have to have a little faith sometimes.” And Robin comes back with; “Faith is a belief on absences of data. It invites disaster.” A statement, which turns out to be true; and a true Robin always predicts something before it happens.  The second scene was between Batman and Superman as they struggle to stop Trigon. Superman says, “If we cannot stop this creature…” And Batman cuts in with, “I know.” They are referencing to the fact that they believe if they cannot stop Trigon how will a bunch of kids. The Justice League doubting the Teen Titans is a common theme in the comics, and I would have been very disappointed in this movie, if I didn’t see that doubt.

From the awkward romance scenes between a budding couple, fights between parental figures and teenagers, the coming together of two teams, and the shifts in loyalty, Justice League VS Teen Titans has everything that makes a superhero story great.