Summary: With the body count in Hell’s Kitchen suddenly rising, namely made up of several well-known gangs of New York, Daredevil must track down the newest vigilante on the scene and stop him from killing anymore. But that’s the least of his worries when his old flame, Elektra, returns seeking help in matters of her own. Caught between two wars the curtain over Hell’s Kitchen begins to fall as  Daredevil’s destiny becomes clear…

Review: By now pretty much all of you have seen season 2 of Daredevil on Netflix. It’s been out for almost a month now. But in my household finding time to sit down, relax and watch the blood letting begin for 13 episodes is generally a tall order to ask. Especially if I’m wanting to do it in a short amount of time. That’s why you’re receiving this review now and not a month ago when you should have. And I apologize for that, but let’s get down to business shall we?

Season 2 opens on a high note and for the first bulk of the series really keeps a stellar momentum going. I’d say it’s around the last 3 episodes that this season begins to dovetail under its own massive weight. The show has sequel-itis and as much as I did enjoy this season it does show. It also suffers from the same thing Jessica Jones did and in fact wraps up in an eerily similar fashion. 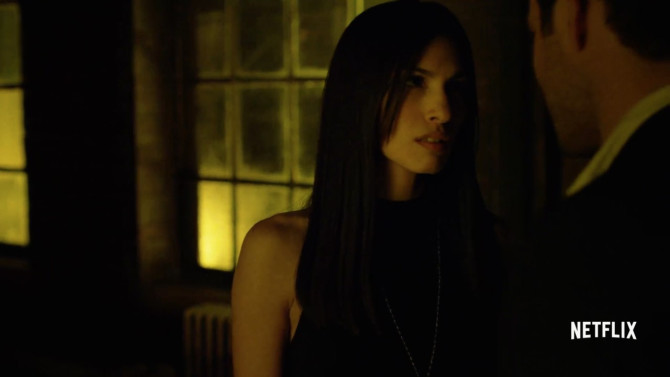 In short season 2 tries to do way too much and ends up tying up loose ends in ways that either don’t really make sense or seem forced and out of place or – and this is the bulk of it – those loose ends don’t get tied up at all. Many things are left out in the open and it really makes the ideas for this season feel sloppy and hamstrung together. Now, Jessica Jones at least stayed on top of the core story which was Jessica vs. Kilgrave. By episode 13 the Punisher story seems almost forgotten and Elektra’s story feels too massive to really do the Hand justice. And that’s exactly what happens.

Some of the best parts of this season were the characters themselves and not really the events surrounding them. Matt Murdock was really pushed over his limits and even walks away with almost no one left dear to him to call a friend because of his hubris and Jesus-complex as a hero. Frank Castle was given his best interpretation on screen yet. A truly complex character who suffers from the loss of his family and goes after the bad guys in a way no one else is willing.

Elektra, whom I’m sure is the most divisive of all in her portrayal, is still young and wild and hasn’t fully mastered the discipline we know her to have in the comics. So I liked getting to see this new iteration of her.

Karen and Foggy both get some great moments as well and both seem better off in their lives by the end because of the choices they are forced to make here. I very much enjoy seeing Karen take over Ben Urich’s office at the New York Bulletin. However I personally think it might have been too soon to tear down Nelson and Murdock before their law firm really got to take off and shine.

Mostly this season is about the weight of being a hero and what choices we have to make in order to be the person we want to be. When you stop to think about it Daredevil is the best on-screen interpretation of Spider-Man’s life we’ve ever gotten. A street-level hero who is just trying to do the right thing and at the end of the day still find time to hang out with his friends, run his own business, and pay his own bills. And like season 2 shows us you just can’t have everything.

I would say story wise it’s the return of Stick and the truth of Elektra that really sends the season under. I’m not really sure what they mean by Elektra is the Black Sky because there was a young boy in season one who was the Black Sky, so who’s the Black Sky? What is the Black Sky? Why must the sky be black? Can’t it be a deep auburn instead? Stick takes responsibility for being the Chaste but I thought that was the organization he himself works for. And what about the guy he reported to last season in the same episode that introduced the other Black Sky?

What’s going on with the giant ass hole in a warehouse in Hell’s Kitchen that Daredevil and Elektra found? Why were those kids who were drugged and drained of blood not only acting like uniform and well-choreographed zombies in the hospital but also fully ready to go back to their captivity? I’m sure it was because they were in essence hooked on whatever stuff Nobu was giving them but what was their blood even doing to fuel the re-animation chamber?

Why in the final battle against the Hand did almost nearly all of the ninjas seen on top of the roof heading for the warehouse not all make it to the final battle? And what of the dozens of Hand ninjas coming up to the roof from below? Why did the show forget about them?

I know I’m asking a lot of questions but those are just some left over from the Hand storyline alone and I’m sure there are plenty more if I thought about it. But I don’t want to because I do want to walk away having liked this season because it was entertaining. Again, I very much liked the characters, the Punish storyline was pretty damn great even if it trickles out in the end thanks to some rather unnecessary revelations.

I mean, was it truly necessary to have his old General – the ONLY person outside of our main cast who likes Frank and could’ve served as a great supporting cast member if he ever got his own series – turn out to be the Blacksmith? Would it have been really that hard to make Nobu the Blacksmith which would perfectly bring Frank’s story into the fold of Elektra’s and seamlessly bring our three major heroes into the final battle together?

Season 1 was sensational because it felt focused on what it wanted to achieve and kept its cards tight in order to reach its goals. Daredevil vs. Fisk. Simple, to the point, 13 episodes. Let’s do this. And I think a lot of that was due to Steven S. DeKnight who left the show after season 1 and has a true knack for keeping his eye on the prize and the details of his story free of unnecessary fluff. His absence is noticeable this season and the season definitely suffers for it.

Well I’ve spent all this time ripping the season to shreds after saying I liked it. But I did point out things I very much liked about it so how about I point out some more. Hmmm? 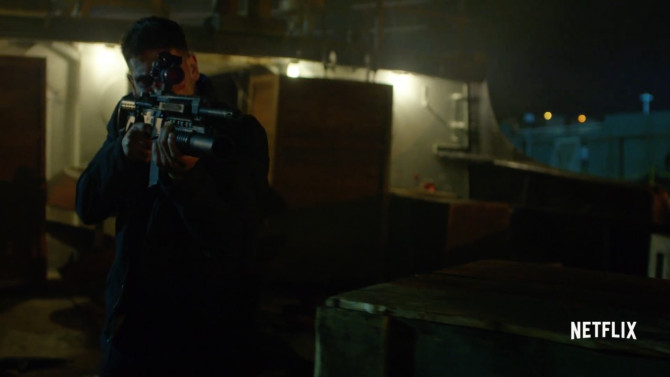 The Punisher getting to go raw leads to some of the best moments of this season. I mean, every movie iteration of the Punisher has seen the man get to kill and slaughter as he damn well pleases. But most of the time it’s been with guns. He definitely uses a lot of guns here but damn, that prison hallway scene where he just goes beast on all those inmates with various shivs and stakes was fantastic to watch.

I also very much liked how Wilson Fisk was added into the season seamlessly being added into Frank’s storyline and setting up some probably great stuff for season 3 when we get one. The Murdock v. Fisk scene in the Prison is definitely one of the most intense on an unnerving level of the season. Just behind when Daredevil discovers those teens getting their lives drained away by the Hand while in a dungeon.

I heavily appreciated the return and usage of Ben’s old boss Mitchell Ellison who gets a bit of his own redemption story after how he treated Ben last season. It was really nice and touching and I’m totally happy with how he treated Karen as someone who was solidly onto something rather than immediately dismissing her to be a crackpot. As the cliché so often goes anywhere else. Even if he didn’t really show it last season Ellis cared deeply for Ben – made evident by him keeping his office exactly the way he left it after he died – and it’s great for him to see Ben in Karen and allow her to carry on that legacy.

Not only were the Hand a part of this season and allowed to go full on ninja but they were so unabashedly able to at that. They were the quintessential what we imagine ninja to be, able to fight without making a sound and stealthy as crap. So much so that even with one standing directly next to him Daredevil’s can’t hear them. Not even their heartbeats. Although the heartbeat thing may be due to the re-animation chamber but personally I’d rather it because, you know, they’re highly trained ninjas. It’s great seeing Marvel and Netflix not be shy about what the Hand is.

As we continue the lead up to Doctor Strange we get more playing around with mysticism this season and slowly introducing it the Marvel Cinematic Universe. It’s something Strange will very heavily involve itself with and Iron Fist directly after it probably will once audiences are more familiar with it these ideas. Daredevil season 2 plays around with mysticism but at the end of the day we really don’t get to see any of it. 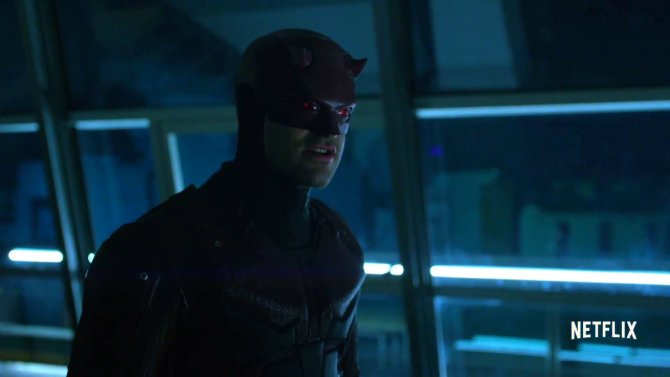 I assume Marvel is only wetting our appetites for Doctor Strange and not allowing anyone to fully explore magic until that movie does. Because Daredevil isn’t the first offender of this, oh no. I do get that way of thinking but it also robs some of these stories of their potential I fear.

Daredevil is far from perfect and sadly doesn’t live up to predecessor in the ways that made season 1 so great. However it’s not a bust either as it provides great moments and great characters all throughout its 13 episodes. I do wish it could have stayed more focused on what kind of story it wanted to tell rather than try to jam pack as much into it as it did, but what we got isn’t the worst thing and overall I did like season 2. Even for all my interrogating its place in this world.

If you haven’t seen it yet, well, I did tell you there would be spoilers at the very beginning. However if you haven’t seen it yet definitely go watch it. It’s more Daredevil and you get to see him interact with a better iteration of Elekta and the freaking Punisher. And if there’s one thing I enjoy it’s finally getting to see some of my favorite heroes from the comics interact with one another for the big or even small screen.

Final Score: 3 Hardcore Ninjas out of 5