Review: What an interesting episode this was.

Once again we’re treading the territory of seeing the future. But instead of Raina seeing it and then telling us about it, we meet another Inhuman who distributes the ability to others via physical contact. This leads the team on a mission to stop the future from happening. The subject this episode tackles isn’t new to storytelling and most certainly not even to the show (see: Raina in previous seasons as  I said) but it does handle the way the story is told in an interesting way.

The way the episode is shot it tries to exhibit the idea of palindrome, or the idea that something happening one way can be experienced the same backwards. With both the beginning shot and the ending shot of the episode (minus the end credits scene) being very similar to one another – almost identical.

This is a very Daisy centric story – something we really haven’t had all season and something I oddly enough haven’t missed. Probably because her story was at the forefront of the first two seasons. Since Bobbie and Hunter are gone and Mack is currently hospitalized it only serves that the writers would eventually have to shift their focus back over to her. 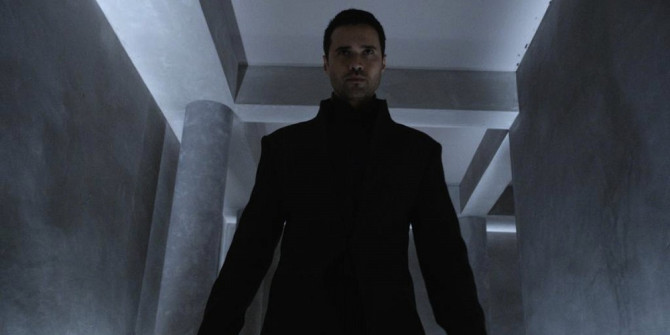 And after the end of this episode it seems both Daisy and Lincoln are going to need to be hospitalized. At this rate there’s not going to be anyone left except Fitz and Simmons. Speaking of Fitz, after Daisy sees the future thanks to contact with the Inhuman Charles – a homeless man – Fitz is immediately placed in the role of “time is concrete and once you see the future there is no way to change it.”

Now as a scientist and engineer I would imagine Fitz not be so… solidified in his beliefs of what’s concrete and what is not. I mean his and Simmons are all about discovery and beating the odds. Then again these last few episodes Fitz has really been thrown to the wolves as far as characterization goes. I genuinely hope it’s not a trend that continues.

Of course Fitz is proven right however as the entire sequence of events Daisy saw does end up coming true after another unseen series of events makes sure that it does. Such as Andrew returning to base to say goodbye to May before turns into Lash for the final and permanent time. This scene between the two is actually quite touching, and I am glad they are addressing that Andrew isn’t a straight up villain he’s just going off of the need to play out the purpose he was built for.

Which theory time! Lash kills Inhumans because he’s been made to limit the amount of pawns that Hive can have to put on the playing field. Hive is supposed to lead the Inhumans to power and Lash is actually the hero who is stopping him; albeit in a bloody and, heh, inhuman way. – I really hope this ends up being the case.

We also see at the end of this episode Daisy having a vision of the spacecraft we saw at the beginning of the mid-season premiere. An unknown SHIELD agent dead in space with the cross necklace belonging to Yo-Yo. I am quite curious how this is going to play out, perhaps that unknown agent is Lash and that’s how they’re going to kill him off this season?

Oh, and can we STOP killing Inhumans? I get it, it makes stories more difficult to write later but much like how the MCU kills main villains left and right there’s just a droll to it now. We need reoccurring side characters and even threats and the MCU continues to waste so many future opportunities by all the bodies they rack up all the time.

Anyways, a very interesting episode. I really, really like Ward as Hive. This is exactly what Ward was meant to become and it’s incredible to see how well Brett Dalton acts subdued and enigmatic. I know he’s not going to make it out at the end of the season but I’m very interested to see where they take him. I’m also glad that this episode essentially sees the power shift from Gideon to Hive as Gideon really gets put in his place here. A rather intriguing dynamic going forward.

Quite a good episode when you break it down, not any new territory though. Definitely acts as a big set-up episode for things to come, which isn’t bad when it’s also exciting.