Greetings True Believers and welcome to Battleworld where the future of the Marvel universe is being formed right now. I will be bringing you up to date news and reviews on events as they happen and looking ahead to what is sure to be some of Marvel’s most imaginative stories ever to come out of the House of Ideas. I have been reading every title in this massive event and have yet to be disappointed; while some stories are certainly much better than others there haven’t been any real washouts in the lot in my humble opinion. So without further dalliance let’s jump right into the heat of battle with Secret Wars #3 written by the prolific Jonathan Hickman with mind-blowing art by Esad Ribic.

The third chapter in the epic Secret Wars series continues to raise the bar as it not only lives up to but, exceeds expectations. Hickman is a master of building these huge universe spanning tales of cataclysmic conflict and when paired with an artistic genius like Esad Ribic who has the uncanny ability to reach into a writer’s head and pull the images straight from the source, the result is nothing less than comic book perfection. Of all the things Hickman is doing right on this title the most impressive element has been his laser sharp focus in keeping the main narrative largely self-contained; certainly he has provided the other Marvel creators working on the various tie-in title with tons of plot points to pick up and nearly endless ideas to contemplate. In issue 3 Hickman reacquaints us with the survivors of the former universes and provides a deeper examination of the God King Doom who very quickly moves from a monumentally silent stalking shark to an engaging charismatic tyrant. Hickman has proven himself to be extremely adept at writing an authentic Doom, he has a firm grasp of all the elements that go into making this icon villain more than a man in an iron mask, the ego-maniacal man with the twisted soul and broken heart of a poet that beats beneath the armored chest plate. These are just a few of the aspects that Hickman brings to the character but, he uses Doom’s dialogues with Sheriff Strange and Susan Storm to bring much of what makes the God King tick instead of beating us down with endless back story and needlessly wordy exposition. 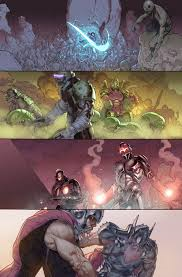 The most intriguing element of Doom’s character is that he may not even be the villain of Secret Wars; certainly he has outshined the Avengers, at least in keeping some semblance of a society alive and thriving and although he esteems himself far above his loyal subjects he does show a kind of love for them, maybe not traditional but genuine nonetheless. Hickman really plays up the humanity of Doom in this issue, presenting him as deeply scarred and flawed to an almost incapacitating degree at times. The contrasting sides of frailty and godliness existing in the same man make him an extremely interesting character and Hickman masterfully explores that paradigm.

Doom’s Sheriff Strange is another intriguing character and in this issue we see a bit of why the occult doctor is so loyal to Doom. However, Strange has designs of his own that are not known to the God king at this time. Hickman is doing a tremendous job of keeping the pace lively while playing many of his cards quite close to his vest; we see just what he wants us to see when he wants us to see it, thus keeping the opportunity for a big reveal very much alive.

Visually, Esad Ribic has capture the epic scale of Hickman’s writing better than perhaps any other artist could, blending science fiction and high fantasy elements with super heroics. His character designs are amazingly detailed as are his settings. Ribic has a way of making the most fantastic environments look like actual locations, add Ive Svorcina’s ethereal colors and eerie lighting to the equation and a masterpiece soon takes shape.

Secret Wars has raised the bar for Marvel events from here on out. The scope is as epic as any previous event but the entertaining action is tempered with deeply detailed characterizations and authentic human drama, all at a pace that keeps the pages turning at light speed. Ribic and Svorcina have once again delivered a gorgeous comic book from cover to cover. The visuals on this title have been top notch from the very first panel and I suspect this will only get even better. (5/5)