Capture Creatures #4 by kaboom! was a beautiful little comic. My first foray into capture creatures, I wasn’t totally sure what was going on. The writing and the beautiful art were very intriguing nonetheless. The illustration was in a style that is simple, yet very pleasing. Kind of a Tezuka “Astro Boy” mode. It looked very “animated” as if any given panel might start moving before my eyes. Not in the least sense overdone. The colors are wonderful. Katy Farina does a great job making the illustrations sing. There are 3 different covers, all of which are very beautiful. The simple line work paired with the texture of the coloring, produces a very lush look. 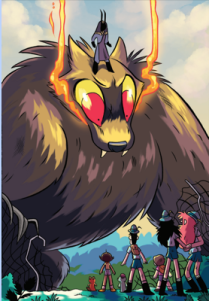 I’m drawn in by a story that seems to have this trio of characters on a quest of sorts. They are protectors of “creatures” and at this point in the story seem to be marooned on an island with some other wacky characters that may help them, and may be a hindrance. The villains, although I am not sure what they are about, have a very creepy look to them, ebony blank faces, cloaks, etc. This art team is great at mixing creepy with cute. The heroes are cute manga-esque characters that can emote during the talking parts, and kick ass during the fighting parts. It’s a very effective approach to the character designs and storytelling.

I would highly recommend this book for younger readers, or any reader that is looking for something that feels like it is telling an epic story in an honest way. I felt some similarities to Akiko, and also a little bit of some of the other kid friendly titles like Adventure Time, Bravest Warriors, Steven Universe, or Help Us! Great Warrior. Really, this is my favorite kind of comic. One that is truly all age like Bone, Usagi Yojimbo and Uncle $crooge. I feel that these titles are the future of mainstream in that they will usher in the next generation of fans. Those who are too young to comprehend or follow the comics that are written for 30-40 year olds. Comics need more titles like this one, and I for one will be keeping my eyes out for more Capture Creatures.