Summary: Eight years after the Hulk battled the Abomination on the streets of Harlem the neighborhood has rebuilt and now Luke Cage – first seen in Jessica Jones – finds himself caught within yet another battle for the streets. Except instead of it being two giant green monsters, it’s a gang war for power and control of Harlem. He has indestructible skin and he’s super strong, but can Cage find within himself the strength he needs to take crime head on? When the bodies hit the floor he may have to force himself to fight whether he likes it or not…

Review: Luke Cage, the hotly anticipated latest addition to the Marvel Cinematic Universe and Netflix streaming service has a lot to live up to. The titular main character, Luke Cage, was first introduced to viewers in the aforementioned Jessica Jones where he was, for a short while, Jessica’s boyfriend until Kilgrave brainwashed him into attacking the girl who ultimately killed his wife.

Seeking to take a break from the life of one with super powers, we skip to 5 months later where Luke’s been staying in Harlem and working in a barber shop as a janitor and in a club as a dishwasher in order to pay his rent and stay busy. It’s a nice little life away from all the craziness he experienced in Hell’s  Kitchen with Jessica. 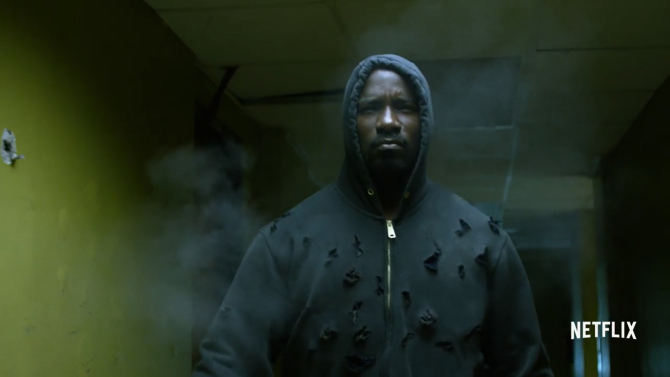 However that all goes straight to shit when a firearms trade goes south and a couple of kids Luke knows and cares about get killed during the transaction. This begins a downward spiral of events as Luke – spurned on by his current mentor Pop – attempts to get the bottom of how these kids were involved with the dealing, and protect them from those who are seeking to do those still alive harm.

Enter Cottonmouth, the villain for the first half of the series. A gangster living it up in Harlem, owner of Harlem’s Paradise the nightclub Luke works in, and the man who was most affected financially by the loss of both the money he paid and firearms he didn’t get.

The first half of the season is all about introducing us to our characters, finding ways to make us care about them and also tell a damn good crime-gangland drama. We’re introduced to Luke Cage, Cottonmouth, Pop, Shades, Misty Knight, Detective Scarfe, and Councilwoman “Black” Mariah Dillard. Some of whom only last the first half of the season and the other half who make it all the way through to the end.

If the first half of the season is all about telling a good crime drama, the second half beginning with episode 7 is all about telling an old fashioned superhero story complete with mad science and the cliché of the evil step-brother. If I had one huge complaint about Luke Cage as a series it’s that with the beginning of episode 7, while still a fun second half, does feel like a show that loses its focus in its final 7 episodes.

Let me focus on the first half however, going back to discussing Cottonmouth and Luke the two end up having a fun back and forth in their cat and mouse game to bring each other down. Luke is completely impervious to what Cottonmouth can throw at him and so being the gangster he is he begins to go after those who Luke cares the most about.

Unfortunately one of those caught in the crossfire is Luke’s mentor, and even Cottonmouth’s old mentor, Pop after Cottonmouth’s right hand man decides to take out Pop’s barber shop in an attempt to kill one of the kids who survived the aforementioned arms deal that went south. This is the biggest turning point in the earliest episodes and even though it’s something you can see coming the show respectfully and impressively uses Pop’s death to mean something more for the events that unfold.

What his death represents is the death of history. And history, like so many other themes, plays a huge part in this series. There are so many references and straight up discussions about what Harlem as a community means to black history but also of the people who built this country and whose importance to both history and black history can’t be understated. Pop is a huge part of Harlem’s recent history in this world and unfortunately loses his life to those who both don’t understand and choose not to recognize the history with which their lives were built around.

Luke is a hero we’re already familiar with so most of his journey is about self-discovery of continuing to be that hero but also to discover his past. His own personal history and what makes him who he is. It was heavily alluded to in Jessica Jones but it’s here that we get a lot of those answers finally. Cottonmouth however, along with Misty Knight, are the two big standouts of the first half of the season and who we are meant to branch onto as foils for Luke. 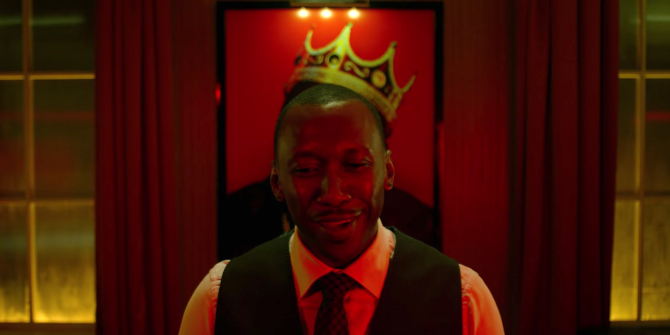 Cottonmouth is a villain I would put on par with Wilson Fisk as a man who understands the world he lives in and attempts to make the most of it whether he wants to or not. Much like Luke in a sense. When we finally get an origin episode for Cottonmouth we learn that he was simply a kid who wanted to ultimately be a professional pianist but was strung up by his family’s gangster life that what he is now is all because of them.

It’s truly a heartbreaking episode because right after that the second big twist for the series takes place and Cottonmouth is killed by his cousin, Councilwoman “Black” Mariah Dillard. The “Black” being a nickname alluding to her comic book counterpart, but not something I’ll continue to call her from this point on. We’ll just call her Mariah. – Mariah is a political figure in Harlem who’s reluctantly teamed up with Cottonmouth to keep her position in office while also using his money to open up recreational centers across the neighborhood.

The twist is definitely a shocking one but also one I ultimately feel was where the show lost something that it didn’t quite regain in its second half. A villain that was despicable but also sympathetic. It’s villains like Fisk, Kilgrave, and Cottonmouth that the Netflix shows really exceed at in making us care about them in some way while knowing full well how terrible they really are.

After Cottonmouth’s death you imagine Mariah will take over as the new big bad for the season but instead a new gangster enters the fold named Diamondback – someone we get mentions of throughout the early episodes as someone Cottonmouth is afraid of – and for me personally Diamondback just didn’t do it as a proper villain worth rooting for. And ultimately neither is Mariah or Shades - another gangster working with Cottonmouth and Dianmondback.

I’m not going to spend much time talking about those last two because I just don’t have the space in this review but I found Mariah more of a pawn throughout this whole thing and I hope she’ll really step up in season 2 and Shades is a character who played right hand man to Diamondback and got even more screen time than him but for me just fell flat as a boring villain who we still know very little about.

Before we talk about Diamonback and the second half of the season let me just briefly talk about some of the other characters seen in the season that I’ve already mentioned but haven’t yet discussed. Misty Knight is a character from the comics with heavy ties to both Luke Cage and Iron Fist, the next upcoming Netflix/Marvel series. In this world though she’s just meeting Luke Cage for the first time and she probably doesn’t know Danny Rand. However she’s one helluva a great character who sort of has her own super power. She has an eidetic memory – or photographic memory where she can pull from her own head vivid details of her life and even details from a single photograph that no one else can easily see by recreating the crime scene in her head.

It’s pretty cool to see and it’s great to see the evolution of her character, someone who knows the system she works for as a Detective is broken but still tries to work within it. She doesn’t have her bionic arm in the show and although she comes close to losing her arm near the end of the season unfortunately – and this terrible to say – she doesn’t so we won’t get any bionic arm Misty for at least a while longer.

We also get Claire Temple, the Night Nurse of the MCU, back this season and learn quite a bit more about her own history growing up in Harlem as she grows closer to Luke Cage in their shared crusade to bring down Diamondback. We even get to hear Claire discuss her new found passion to help heroes with powers which is a great progression for the character.

The one thing I did not explicitly like about this season is how Claire and Luke’a growing relationship became uncomfortably romantic by the end. I don’t feel it was a natural progression for either of them and honestly just felt out of place. I hope it’s not something that actually becomes a thing for at least awhile longer. If at all.

Now let’s talk about Diamondback who’s a gangster even more powerful than Cottonmouth. Overall I was not a huge fan of him. He was an over the top character who was fueled by revenge to get back at his half-brother Luke by orchestrating all these events to bring about his brother’s demise. The history these two share is long and storied and we get some of it within the season but by the end there’s still a bit left as a mystery. Personally I was not a fan of the evil half-brother cliché nor do I feel like the show handled incredibly well either. 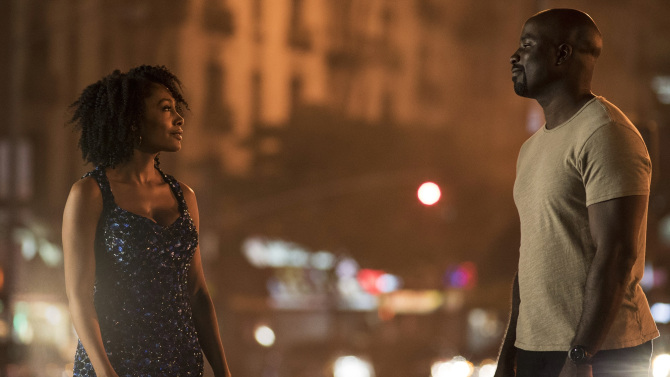 There’s so much more I could and should talk about with this series, like it’s use of race and exploration of today’s black culture and unjustified police brutality. Luke’s history which would be a whole review all on its own. Side characters like Detective Scarfe who was interesting at times but ultimately was underwhelming as a character. And the kick-ass music that makes this series simply shine. Seriously, this show has an amazing soundtrack. Or how disappointed I was that in a show taking place in Harlem we finally could get the chance for someone to openly, verbally reference the events of The Incredible Hulk where two titans literally brawled on these very streets.

If I had the time to do episode reviews I would definitely get into most of that however I only have the time to do a series overview review. And though I’ve said a lot of negative things about the series definitely don’t take away from this that I didn’t like it. I quite enjoyed Luke Cage and I vehemently await season 2 with excitement and fervor. This season was filled with a lot of great moments, nerdy moments, kick-ass moments, it had a lot of great characters who grew and made me feel both good and bad often at the same time.

Luke Cage is a wonderful addition to the MCU and the Netflix universe of shows. Unfortunately it’s not perfect. That’s a shame, but it’s still damn good. And I hope you all enjoyed it as much as I did.