We’ve come to the finale. The road to Riot has been bumpy with beheaded bigots, sloppy with salvation, and phantasmagorically fun. (Ok. I’m going to try not to lapse into Crypt Keeper speak again, but with books like this, it can be hard.) In this final issue Matt Miner and Sean Von Gorman come to the oft looked for and seldom realized confrontation with the Westboro Baptist Church, and bring fantasies to life.

Toe Tag Riot #4 drops this week. If you’ve a weak stomach for gore or get the vapors when faced with hardcore extremism, well, you probably haven’t read this far anyway. In the first three issues Miner introduced us to the cursed zombie band Toe Tag Riot. After one of their members took liberties with a young fan, her witchy mother hexed the foursome into dead-eaters every time they play. Not only did the curse work on them, but also it worked for them, giving them the notoriety that had thus far lacked, making them popular and sought after, and making them very hungry for people parts. Last issue in particular brought out the worst of mankind when TTR was faced with boycotting by the Westboro Baptist Church and it’s founder Fred Phelps. This issue brings the two parties into direct, munching conflict.

Look past the zombieism and hate speak, and you see that this book has an interesting core that you don’t see often in mainstream books. Miner has the opportunity to have a villain in his book that, until recently, was still among the land of the living. (Phelps died in February of this year.) Miner took that chance and not only pitched a book around a living hate-monger, but centered all of the rage of a generation on him. What person among us has not groaned when we’ve seen the signs picketing at a soldier’s funeral? Or at a LGBT rally? Or even at a Kevin Smith film? It seems that the WBC could be one of the most disliked groups in the country. But this isn’t about them. This is about a comic book. A good comic book. Matt Miner has done just what he set out to do, and that is to write a book that will make people think a little. What better way to shine the light on idiocy than by publishing it in four-color glory? 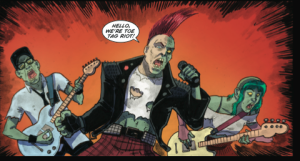 On that note, I have to once again describe to you how great Sean Von Gorman’s art is for this book, not to mention perfect coloring by Savanna Ganucheau. Von Gorman has captured the likenesses of the real people in this book and incorporated them with his own style, making it a seamless fit. In doing so he makes the zombies we’ve been seeing from the beginning seem more realistic, and add to the overall solidity of the book. Ganucheau really makes the blood flow and the zombie flesh rot. Her muted color work is a great accent to Von Gorman’s pencils and inks.

Toe Tag Riot #4 is the end of a series that began as a successful Kickstarter campaign and ended with Black Mask Studios publishing it. Matt Miner and Sean Von Gorman have proven that no mass of mutilated hate mongers, no boil-infested bigots, and certainly no zombies, will keep them from making the kinds of comics that they want. And we should thank these boils and ghouls for making them. (I couldn’t help it.)