Well it’s that time again, when the big comic book events take over every title on the racks and promise huge, drastic changes to our beloved heroes. It seems that those words have never been truer than they are now with both Marvel and DC putting the future of their respective universes as we have come to know them completely at risk. Certainly this is not a new arena for DC to do battle in, they are just a few years out of the universal New 52 re-boot and living with the subsequent changes have not been an easy pill to swallow for many longtime DC readers. So, now the most obvious question for me is; will the events of Convergence erase those changes or at least reset the old status quo of pre-New 52 DC? The stage has been set and the curtain has been pulled back ever so slightly with this week’s Convergence #0.

Co-writers Dan Jurgens and Jeff King are faced with the arduous task of laying the foundation for this promised game changer and while the main series is sure to feature an eclectic array of characters spanning the 40 different DC worlds captured and bottled by the villainous Brainiac, this introductory chapter is entirely New 52 Superman-centric. Jurgens and King rely almost solely on the dialogue between Superman and the several variations of Brainiac depicted here for the majority of the necessary exposition and set up of this extremely complex plot; all the intricately devised, multiple universe spanning threads that will surely be picked up and meticulously examined in the upcoming main arc are touched on here in the conversation between hero and villain. This is a huge order for a single, self-contained issue so it is no surprise that the pace of the narrative is not the fastest, in fact most of the action sequences come in Van Sciver’s lavish two page spreads depicting past relevant events in the classic DCU like Superman’s death.

There is no disputing that Jurgens is perhaps the most important and prolific Superman writer of the 90’s and beyond, that alone makes him a logical choice to head up an event that hinges so strongly on Superman and his mythology however the most influential of current Superman stories seems to be last year’s Superman: Doomed that featured some pretty big guns in writers; Greg Pak, Charles Soule and Scott Lobdell, or at least the final page of that storyline which contains an assemblage of New 52 imagery. This seems to be perhaps the only inclusion of New 52 elements other than that incarnation of Superman himself. 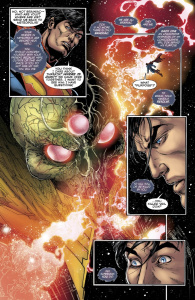 This issue begins with New 52 Superman held captive by a god-like Brainiac; as Big Blue tries to escape he learns that the insidious villain has accumulated some 40 bottle cities like Kandor of Krypton, but these are each from a different universe. The writers use Superman more as a device for exposition than a protagonist in this issue in that sense he never quite feels like “Superman” for much of the story. Instead he comes across somewhat stoic and his presence incidental, which is quite disappointing for a Jurgens written Superman, however this could be very much by necessity due to the excessive amount of set up needed in a single issue. Brainiac manages a bit better as he is depicted here as a supreme intelligence, existing more as a consciousness or disembodied intellect outside the confines of time and space with tendril-like conduits reaching into various realities and universes. This lends the sinister foe a certain distinct air of danger and prominence befitting his state. 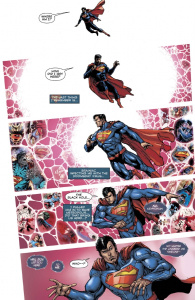 Ethan Van Sciver all but steals the show in with his incredible visuals in this issue. His style is a perfect fit for the classic DCU that is so prominent in this event; from his take on the various Brainiacs to his dynamic interpretations of other classic DC characters and worlds Van Sciver offers enough mind melting images to fill an Alan Moore story. The artist creates some of his most eye-popping page compositions to date making such labyrinthine use of panels he calls to mind the work of M.C. Escher at times. His stylized and amplified interpretation of anatomy complements his kinetic brand of visual storytelling perfectly and goes miles to help the somewhat beleaguered pace of the detail laden narrative.

Overall Convergence begins in a slower more measured fashion than perhaps many readers were expecting but Van Sciver’s bombastic visuals supply a shot in the arm when things start to slow down too much. Jurgens and King do an admirable job of getting tons of needed exposition into a single issue while maintaining at least a serviceable pace. The story is engaging however Superman needs to be more “super” if this huge event is going to get off the ground and stay there otherwise DC could be faced with something far worse than the ill-fated New 52. The supplement material included after the main story does provide some insight into the various eras touched on in the story, this should come in handy particularly to those not indoctrinated or not so well versed in DC history. (3/5)