Not only does this title team up two of Marvel’s most popular properties, The Guardians of the Galaxy and The Avengers, but it also boasts one of the greatest creative team ups in recent memory, that being the pairing of prolific scribe Brian Michael Bendis (aka BMB, aaka The BoMB) with the quasi-reclusive artistic genius, Arthur Adams. 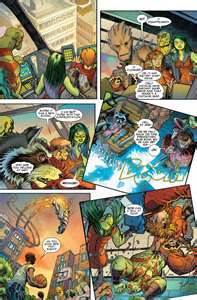 There is a distinct feeling that these two industry giants really let their hair down (metaphorically in BMB’s case) and had some big time fun with this one; there is not a single mention of Secret Wars or Time Runs Out, in fact there is no heavy continuity laden crossed over or tied in elements to this book at all. So why, one may ask, read a book that has no apparent stake in the up-coming epic events of the incursion and promised demise of the various Marvel Universes? The answer is simple and obvious after reading the first few pages of this issue; fun. This book captures the old school fun of books like Marvel Two-In-One or the original Marvel Team-Up. Those of us old enough to remember buying these one-off escapes from continuity off the metal spinner racks can attest to the fact that these were counted among the most exciting, often silliest but always the most fun filled tales the House of Ideas had to tell. There was a wit and a somewhat more innocent sense of humor to these books that has been sorely missing from the modern comic book that is until now.

Bendis does a bang up job of capturing that irreverence that harkens back to a simpler time without dulling his usual rapier sharp wit. The dialogue is humorous, the characterizations are spot on accurate and the pace is break-neck fast. The narrative never once gets bogged down to address heady issues pertaining to colliding universes or alternate timelines and realities, certainly all those elements are at play here but to a far less sophisticated degree. That is not to say this book reads like a young audience version of the real thing, far from it; these are the actual characters, drawing on actual events from past arcs but there seems to be much less at stake here. Even when the Guardians are about to crash while being pursued by the Chitauri there is a sense of levity beyond the usual Guardians light-hearted romps. 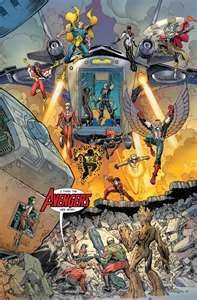 As good as Bendis is and he is plenty good, the real star of this issue for me has to be, one of my childhood heroes, Arthur Adams. From the first time my eyes feasted on the meticulously detailed splendor of his Longshot mini-series I was hooked on this brilliant artist’s lavishly rendered pages. Although Adams’ output was few and far between whenever anything he graced with his magic pencils with hit the racks you can bet I was there to snatch a copy of it up. His X-Men Annual, New Mutants Special and even his Monkeyman and O’Brien series for the short lived Dark Horse: Legends imprint all were like visual crack to which my eyes were hopelessly addicted. Unfortunately there has been a huge void for far too long where Adams’ work is concerned; rumored to be incredibly slow, the artist could never seem to maintain the rigors of a monthly title. In spite of his reputation as one of the slower workers in the industry, Adams has become one of the most sought after and acclaimed cover artists working today. So to see him return to do the interior art for a Marvel title like this that includes some of my very favorite characters is truly beyond words. The years have done nothing to diminish Adams’ genius; his eye for detail is just as judicious today as it was in the 90’s. These pages are a testament to his ability to render an exciting action sequence in exhaustive detail without losing the focal point of the scene. His capacity to effectively and dynamically layout a page is just as impressive as his highly detailed character designs. Colorist Paul Mounts brings vibrancy to Adams’ already lively images; the addition of Mounts vivacious color choices works extremely well in bringing the whole story vigorously to life.

Guardians Team Up offers a nice little reprieve from the gravity of Secret Wars and the events leading to it. This series is something of a throwback to simpler days; times when action figures only had five points of articulation, a website was where Spider-Man left some bad guys for the local cops to haul off and comic books were very often fun. So, True Believers, before the 616 is merely an area code somewhere and the Marvel Universe is forever changed grab a copy of Guardians Team Up #1 and enjoy the ride, Excelsior! (5/5)