Cindy Moon is as close to a female Peter Parker as we are likely to find in the Marvel Universe, in both quirky personality and power set albeit with slight differences, she mirrors the original web-headed wonder. This stands to reason since they were both bitten by the same radioactive arachnid assailant. Since her emergence from a bunker after a decade of isolation, Cindy Moon aka Silk has hit the ground running; she played a major role in the Spider-Verse event and now has her very own on-going monthly series, for as long as the 616 is around anyway.

This first issue picks up directly following the pandemonium of Spider-Verse, Silk is now embroiled in combat with a very manga inspired villain calling himself Dragonclaw. The fledgling super-heroine is experiencing some power glitches, possibly due to damage sustained when facing the Inheritors during the Spider-Verse arc or perhaps just learning the nuances of her powers outside the seclusion of the bunker, whatever the cause the effect is the reality of facing a big baddie with less than optimum defenses. As fate or luck would have Our Friendly Neighborhood Spider-Man just happens to be on the scene and though it doesn’t sit exacting well to have her bacon saved from the proverbial fire, Silk and Spidey share their first post-Spider-Verse team up.

Writer Robbie Thompson has more than enough on his plate in this inaugural chapter of Silk’s story. He does a really fine job of juggling introduction for new readers, backstory and an exciting plot all within one heck of an entertaining narrative. Thompson wastes little time getting to the core of what makes Moon tick and exposing that to us in a way that is meticulous without feeling sterile or convoluted. He weaves a complex tapestry of flashbacks consisting of moments from Moons young life before the spider bite that would forever alter her destiny. She is a character that has undergone a heck of a lot in a relatively short span of years; being sequestered for so long has had an unmistakable effect on her ability to interactive with people on a social level, Thompson has fun with this aspect of the character, playing up the humorous side with some super witty dialogue instead of relying on the often used teen angst and more somber introspective inner dialogue which can sometimes get oppressively heavy if not handled well. Thompson maintains a balance throughout the issue, his narrative is well paced and deals equally well with backstory and plot progression. His character development is intelligent and detailed without being exhaustive, he gives us just the right amount of information to shed some light on Silk’s past without obliterating the enticing shadows that keep us searching and discovering new things about this intriguing new character. 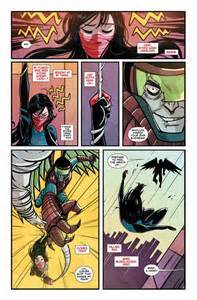 Stacey Lee has a style that marries the clean lines and stylized features of anime with the dynamic staging and kinetic action sequences of a more traditional comic book style, the result is an imaginative, fresh take that incorporates inventive panel use, exciting page compositions with a manga sensibility. Lee’s fluid imagery lends itself perfectly to big action sequences, however the anime influence also works extremely well with the more humorous beats in Thompson’s narrative. Lee seems to have an impeccable sense of timing which serves to enhance the dramatic moments as well as the action and comedic beats. Colorist Ian Herring does a fabulous turn bringing Lee’s images to life, his use of more vivid colors during present events is contrasted by a more muted and subdued palette when dealing with the flashback material; this approach works extremely well in capturing the tone of the narrative as well in adding a certain nostalgia to the events in the flashbacks.

Overall this is a very effective first issue; certainly a working knowledge of recent Spider-Man related titles and arcs would not hurt but Thompson does a really solid job of bringing the uninitiated up to speed in a concise yet detailed manner. Visually Lee and Herring have created a lively, contemporary and dynamic book that is a feast for the eyes. The character designs pop, the older characters are spot on and the newer ones have the same feeling of authenticity. This is a tremendous addition to the Spider-Verse, I only hope Cindy Moon is still swinging around after Secret Wars. (4/5)