One cannot help but see reviews.  It’s the nature of the entertainment beast, of which I am a willing cog, that for every film trailer, book excerpt, or comic book PDF there will be a person tap-tapping away on his laptop, opining on a shadow in the corner or a too-closely-filled word balloon. At the same time, there is nothing better than being surprised and having your preconceived notions wonderfully smashed before your eyes.

566 Frames is just that kind of book. It’s emotional, and touching, and hits all the right beats. Written and drawn by Dennis Wojda and published by Borderline Press in 2013, 566 Frames is an epic story told from a fixed point.

Wojda approaches this as an epic, just as Tolkien started his books (or added in the appendices) with long lists of genealogy, laying out a family tree that goes back, from the author, four generations. It’s a bit daunting at the start, but the way in which Wojda lays the story out so that you don’t realize that you’ve just read 300 pages of a graphic novel.

This is a generational story, told from the point of view of the next generation, not yet born. It feels like these are the stories gleaned from cold winter nights huddled around a fireplace, listening to aunts and uncles talking about the stories they heard from their parents, all of it witnessed by a silent child in the corner, hoping that he won’t be discovered and sent to bed.

I don’t know if this is Mr. Wojda’s personal story, but it seems like it could easily be. There is a lot of emotion that is poured into the tale. The story follows a stream of consciousness, multi generational thread that slinks it’s way through Poland, from before the WWI, through WWII, and into the 50’s and 60’s, all the way to the eve of the author’s birth. 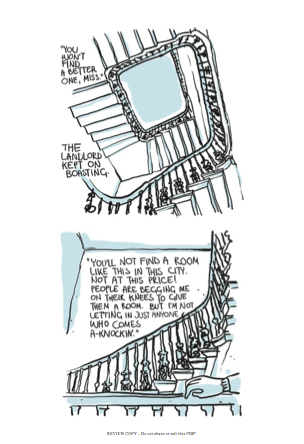 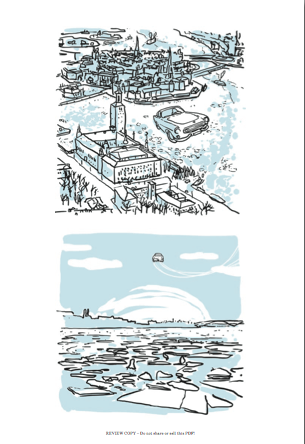 Wojda’s art style is unique, a cartoon-influenced simplicity that works perfectly in this case. But don’t think that this simplicity implies a lack of illustrative skill. There are panels in this book, where Wojda’s use of line is so perfect in the conveyance of emotion in his characters. Something as simple as the pose of a character suggests extreme sadness or worry, and Wojda is a master at it. If you still wonder, take a glance at his building work. There is so much detail that it makes the panel seem too small.

Dennis Wojda has poured more than a little bit of himself into this, and shows how the generations that have come before you are a part of you, even before you’re born. It shows an appreciation for the stories that are told around the woodstove, the history that is in each and every family, and an attempt to keep that history alive through a graphic novel. 566 Frames is a collection of wonderful, heart-breaking stories, but also Dennis Wojda’s love-letter to his family, the members of which are truly a part of him.