There are times that my docket for reviews is nearly empty, and other times when my desktop is so full of PDF icons that I can hardly see the picture of my children, peering out from the background. This is one of those times, and I admit, I lucked out, because as I was clicking through them, getting and idea for what was there, I happened upon this gem.

The first image I saw of Zombies Versus Robots #1 is a stunning painting by Ashley Wood (Sam and Twitch, Spawn the Dark Ages). A second cover was done by Gabriel Rodriguez (Locke and Key). Then I looked at the credits. Chris Ryall and Steve Niles. Deal done. Fold up my cards. I’m reading this book.

Zombies Versus Robots is not a new idea to IDW. Ryall and Wood have already published this story in stand alone books, No Man’s Land, Women On War, This Means War!, among others, but this is the first time it’s come out as a regular series. There are three separate stories, the first two by Ryall, “Inherit the Earth” and “Tales of ZVR” with art by Wood and Anthony Diecidue (Moriarty). The final story is “The Orphan” by Steve Niles and drawn by Val Mayerik

To spoil almost nothing, this is exactly what it sounds like. Robots, automatons nearly unstoppable, fighting zombies, automatons stoppable only by the squashing of the brainy parts. As you can imagine, it’s awesome. We follow an explorer, a drone named Oris-1, as it makes a survey of what is left of Earth, a year after nuclear Armageddon. It’s a great tool to use in giving an overview of what’s happened and what the current situation is. The drone is reporting back to someone though that person (?) is not revealed in this issue. 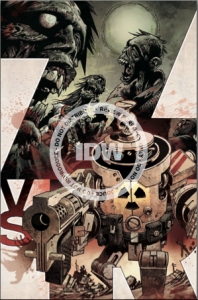 Any post-apocalyptic story immediately grabs my attention, and the world built by Anthony Diecidue is wonderfully decrepit. He draws destroyed cityscapes in a way that makes you feel the twisted girders and the sharp and spiny points of those nuked planets striving to make a go of it in a harsh environment. Not to mention that the guy can draw some rotting zombies and dented robots with the best of them. You can tell that this is subject matter that he has a vested, artistic interest in. This is as fun for him to work on as it is for us to read it.

The Ashley Wood story and artwork takes up two short pages in the middle, but even in those few panels he’s able to evoke a Calvin and Hobbes meets Edward Gorey style strip.

We also get a short by Steve Niles (The October Faction, 30 Days of Night) with art by the amazing Val Mayerik (nearly everything, including co-creating Howard the Duck) which puts a little bit of a human spin on a world that is lacking in any kind of recognizable humanity. Mayerik’s work is wonderful, a callback to short comics that I would expect to see in Creepy or other horror anthology books.

So even on the face of it, Zombies Versus Robots #1 gives the feel of an anthology without the weight. There can be no doubting how much Chris Ryall and Ashley Wood have put into building this universe, and despite the characters being otherworldly and alien, they still recall the humanity that birthed them. Anthony Diecidue, Steve Niles, and Val Mayerik added to the mix only heightens the cool, and you’ve got a book that can’t seem to lose. Zombies Versus Robots #1 is fun through and through, whether you be of the people-eater or zombie-killer variety.