From the very second you open this book it feels like Star Wars and not just a Star Wars comic book, I mean Star Wars! From those now immortal words that have opened every one of the films and have since been etched into our brains as if by the laser sharp edge of a light saber, so begins this first issue, “A long time ago. In a galaxy far, far away…” Then you can almost hear the opening strains of John Williams’ timeless theme as that iconic logo is stretched across a two page spread before the introductory crawl illuminates the adventure that is about to transport us through time and space. The narrative begins with a sequence of panels depicting a starship entering its landing trajectory around CYMOON- 1, a weapons manufacturing planet responsible for arming a large portion of the Galactic Empire, no small task and no wonder it should take an entire planet to accomplish such a task. The entire operation is reported to be automated but as the story unfolds we see that that is not the case at all.

Thus begins the first Marvel Star Wars comic book in thirty years, of course during that absence Dark Horse has been diligently publishing some pretty good Star Wars stories, the best, in my opinion being the last series simply titled Star Wars written by current Moon Knight scribe, Brian Wood. While Wood did capture some of the magic that has endeared this universe and its characters to us, he never really got all the elements together consistently, however he did accomplish much more than any of the other Dark Horse Star Wars series which often felt like fan fiction. Marvel has been hyping the return of the license for quite some time now and finally it’s time to see if all this grandstanding was warranted. Well my friends to that I would have to say a resounding yes! Jason Aaron and John Cassaday have completely captured the chemistry and magic that is Star Wars and they have transferred that magic from the screen to the page without diminishing it one bit.

Aaron has improved upon every one of his predecessors particularly in the area of dialog. These characters are such a part of our popular culture landscape that to attempt any sort of re-imagining or re-invention would be nothing short of heresy and that is not what Aaron does, he takes the rich, complex and beloved characters we have known our entire lives and he very faithfully and accurately furthers their adventures while firmly building his narrative upon a foundation of time tested mythology. Jason Aaron has such mastery of character development that he is able to bring out subtle nuances in these characters that have always been there but, perhaps have been overlooked. In this way he offers us a perspective other than the usual while remaining true to the characters and keeping a genuine sensibility to the work as a whole. He captures the kinetic pace of the big action scenes as well as the humor that is such a huge part of the charm of the films (original trilogy, of course) and the drama of the more poignant moments, especially early in the narrative and plot development as it pertains to Luke and Vader. Aaron does a bang up job of sharing the spotlight between the major players; Luke, Leia, Han, Chewie, R2 and 3PO without making it feel in the least forced. His use of C3PO in the narrative is especially original and entertaining. 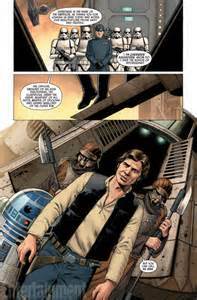 There is so much packed into this issue and all of it works, there is not a single mis-step or superfluous panel. Jason Aaron is at the top of his game here bringing all the tropes of a great Star Wars film to the comic book page and John Cassaday does an equally stunning job with the visual elements. Cassaday is without a doubt one of the most dynamic and imaginative artists working today. He has brought his visionary style to many of the biggest characters from both of the Big Two, including Batman and Robin, Superman and the X-Men many times working with the brilliant Grant Morrison to achieve pure sequential storytelling genius but, he is perhaps best known for his amazing run on Planetary. Cassaday is able to call to mind the actors who have made these characters so iconic without having their images look traced or superimposed onto his drawing, instead he is able to capture the essence of the actor in a gesture of facial feature. Laura Martin’s palette of vibrant colors adds the finishing touch to a look that is entirely cinematic. This is the creative team that a book this huge deserves and they knock this one out of the galaxy.

2015 promises to be a gigantic year for Star Wars and the fans of this beloved franchise with a new film, an animated television series and several big releases from Marvel. This first issue has set the bar extremely high and brought with it the kind of excitement and anxious expectation only Star Wars can generate. So if you are one of the handful of people who have not picked up your copy of this book yet, what are you waiting for, the construction of another Death Star?! (5+/5)