I blame the holidays.  They sneak up on you and hit you where it hurts the most, in your “to read” pile.  And the comics don’t stop; they keep coming week after week.  So, with apologies to the creators of these two fine books, I’m combining reviews here, hoping that I can catch up and still spread the good word about great indie books.

It’s one of the things that make it hard not to read books when I see they have that Black Mask Studios logo attached.  This company has a commitment to great storytelling and some of the finest and most original art out there. These are just good comics.

Critical Hit #3 sees the return of Matt Miner’s (Liberator) working-class-heroes, in a position more than compromised.  Jeanette and Sarah are caged in a steel shipping container in the woods, Sarah’s been beaten, and Jeanette is chained to the opposite wall.  The two are mostly in the midst of flashback for the whole issue, and the stories therein deepens their characters and helps to intensify the motives behind their actions.  Miner’s writing is perfect for comics, and he has embraced the episodic nature of television (and comics of course) to make each issue standalone and cliffhanger at the same time.

Jonathan Brandon Sawyer (Toe Tag Riot, Six) draws beautifully and, when accompanying portions of this particular issue, heart-breakingly.  There is one page in particular that, as I was reading it, I could see what was coming, and although I was internally chanting “don’t do it, don’t do it”, they did it anyway, but Sawyer did it in a way that didn’t show the act accept in silhouette.  That made it somehow even more powerful.  Cheers to the talented crew of this comic, who continue to deliver each month. 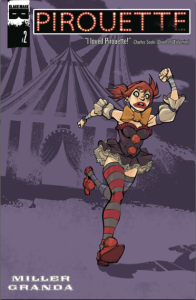 Pirouette #2 also released this week, written by Mark L. Miller (Next Testament) and art by Carlos Granda (Grimm Fairy Tales, Hollywood Zombie Apocalypse).  Dang.  There’s just something about this book.  The clowns are terrifying because they’re clowns, and Miller has infused them with so much sinister cruelty that, even if they weren’t in white face, they would be a scary bunch.  But is it a crime comic?  A circus comic?  A girl-finding-her-lost-parents comic?  These two issues have captured my imagination, just as the circus can, the lights and drama and theater of it all, even when you know that there really isn’t a lot happening.  And it’s kind of true in this case too.  It’s a matter of theater for Pirouette, not as much the show, but the art of telling the story, that Miller has embraced here, and that makes this such a fascinating read.  I’ve been pulled in and have completely gone down the rabbit hole on this one.

Granda’s art is the glue that holds this canvas together.  The choice of colors, provided by El Comic En Linea Foundation, give this that old timey feel, and Granda’s line work and crowd drawings are fantastic.  This is a story about the circus.  And clowns.  And a girl looking for her parents.  All at once and all entertaining and fun and scary.

This week, as you stop into you LCS to pick up your pull, don’t forget to check out these little gems, if they’re still available.  If not, have your shop order them again.  Both Critical Hit #3 and Pirouette #2 are worth having to read again, and more Black Mask Studios comics in the world is a good thing.