The Lemniscate, The Cassini Oval, The Devil’s Curve, The Mobius Strip, these are all names for the twisted cylinder used to represent the concept of infinity, it is also a recurring theme in what is hands down the most brilliant single issue of 2014. However, to refer to Grant Morrison and Frank Quitely’s Pax Americana as a single issue is somewhat misleading due to the fact that it reads much more like a graphic novel; thematically as well as for sheer quantity of content, this book contains not one single superfluous panel. Morrison and his longtime collaborator Quitely have crafted a work of storytelling brilliance as well as an exploration of mathematical theorem as applied to a literary endeavor.

On the surface Pax Americana is an unabashed homage to Alan Moore’s Watchman but that is only the beginning. Any fan of Morrison’s oeuvre knows that you experience his work more than just read it; from the second you turn back the cover you are on a mission to discover more and more of the lush, meticulously detailed landscape as possible with each successive reading. In many ways Pax Americana is the quintessential Morrison work; it transcends the medium of comic books by simultaneously embracing and dissecting it. By examining the very relationship that exists between time and space Morrison crafts his narrative in a manner that redefines both time and space, hence altering that relationship as does Quitely through his genius use of page composition. For instance in one scene involving an altercation between Nightshade and The Question, Quitely displays how comics recreate time via the manipulation of space. During the actual conflict Quitely employs smaller panels by half than those he uses to render the moments leading up to the exchange of punches. This presents the basic idea of the much more intricate concept. 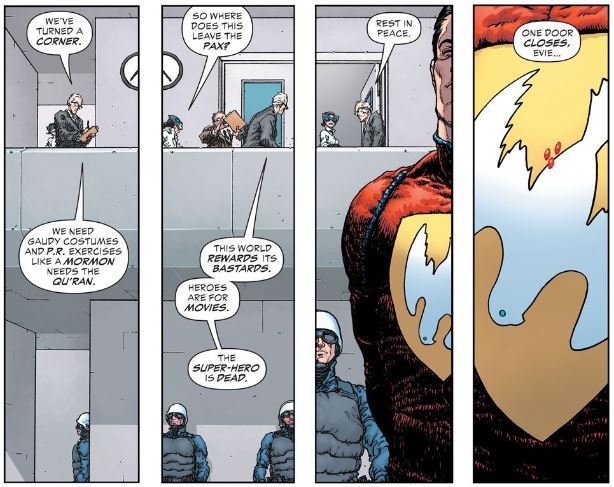 To further delve into the intricacies of the issue Morrison actually provides us with Captain Atom as a Sherpa of sorts to guide us along the precarious precipices of Pax Americana. Captain Atom offers us some direct insight into the workings of the comic book. In a fourth wall obliterating dissertation the good captain references pages 12 and 13 mentioning a “Mobius loop curving through eight dimensions.” This creation of infinite loops is a thematic recurrence that echoes throughout the entirety of the issue; in fact to read the narrative in a chronological or linear manner would be to reverse it completely. Much like tracing the progress of the Mobius loop the reader finds himself in a much more advantageous position to comprehend the story only after finishing it before beginning it, the proverbial serpent swallowing its own tail. This may sound like a confusing proposition but for those of us familiar with the often times complicated machinations of Morrison’s writing it is par for the course and the resulting rewards are always worth the expenditure of time and studious application of attention to detail, remember nothing is there by happenstance or mistake, every word, every image is important just as every brush stroke in Van Gogh’s Starry Night builds one upon the other until at last a masterpiece is visible so it goes with a Grant Morrison work. The Mobius loop is apparent on a smaller scale as well, for instance in another scene, this one depicting Nightshade and her father descending a set of stairs, it is as if the characters are in an M.C. Escher piece ascending and descending the same stairs at once. The entire spread is cleverly designed to be read in either direction just as each panel is crafted to function individually.

The previously mentioned pages 12 and 13 are yet another example of Morrison and Quitely collaborating to genius results. The two page spread is systematically broken down into a grid of equal sized panels to tell three separate but related stories taking place concurrently in time, involving three entirely different sets of characters. A complete narrative can be followed in each row of panels with a beginning, middle and end. Nathan Fairbairn’s exquisite colors serve to differentiate the narratives. This is one of the highlights of an utterly brilliant issue and shows the extent of talent that exists in this creative team. That being said, every single page of this book can be painstaking examined and dissected, the layers peeled away to reveal deeper meaning. This is without a doubt the single most satisfying issue I have read this year; there is just so much here to explore beyond the reimagining of the Charlton characters like The Question, Blue Beetle and Captain Atom there are layers of subtext that warrant repeated readings to divulge the meaning and resulting effect on the work as a whole. This is an intricate work that not only pays homage to the inspiration of Dave Gibbons and Alan Moore’s seminal work, Watchman but exists as a work worthy of accolades and study on its own merits. Pax Americana is an ode to the deconstruction of comic books written with great love and respect for the medium; it arrives paradoxically at the conclusion that a work of singular importance or an object of adoration, like the Captain’s beloved dog, is far greater than the individual components that it is made of.

Visually Quitely packs one heck of a wallop with images that a sure to become as iconic as the blood spattered smiley face of Watchmen fame. His faithful rendering of the old Charlton characters is only enhanced by Quitely’s subtle application of modernity. His precise, mathematical use of panels and calculated division into grids then flipping them at times to offer the mirror opposite works to exacting results, in fact this could be Quitely’s most inspired use of panel layout to date. I have been an avid fan of this guy for well over a decade and he always finds a way to outdo himself so I am really looking forward to how he is going to top this. Nathan Fairbairn does a fantastic job of coloring Quitely’s hyper detailed imagery which is no small task as Quitely is perhaps the most meticulous artist working with the possible exception of Geoff Darrow. This level of detail works extremely well when it comes to keeping pace with Morrison’s kinetic script.

Pax Americana is a book steeped in homage to archetypal characters and influential works of sequential storytelling perfection all serving to illuminate an entirely new world created by Morrison and Quitely. It’s filled with intriguing themes and heady concepts relating to comic books as a medium as well as an esoteric storytelling device. Although there is a sparse amount of plot progression in the overarching Multiversity story arc beyond a few mentions of the “haunted” comic book, the intricately woven narrative and lavishly detailed visuals more than make up for this infinitesimal complaint. After all one does not look for a blemish on the face of the Mona Lisa. Certainly there is a lot to take in, especially to the readers who may not be experienced with Morrison’s work but trust me if you put in the work the rewards are infinite. (5+/5)

Shawn is an aspiring writer/ artist who has been reading,
collecting and living comic books for over 30 years.
He lives in Baltimore with his wife, their son, lots
of cats, dogs and other various finned and furry friends.