Spock has been captured by an unstoppable new threat to the galaxy in Star Trek Boldly Go #4, and it’s up to Captain Kirk and the crew of the USS Endeavor to save him from this deadly cybernetic race known as the Borg! Spinning out from the aftermath of the blockbusting movie, Star Trek Beyond, Kirk is now temporary Captain of the Endeavor, with some of the Enterprise’s crew in new roles, or reassigned. As the Borg sphere continues its relentless advance, war with the Romulan Empire looms, and Kirk will soon face the ultimate no-win-scenario while the fate of Spock and the Federation itself hangs in the balance.
IDW’s new ongoing Star Trek series, written by Mike Johnson, with art and colors by Tony Shasteen, continues to boldly explore the final frontier, pitting Captain Kirk and the crew of the Enterprise from the new movie franchises alternative timeline against Star Trek The Next Generation’s greatest foe, the Borg.

As the Borg sphere reaches Romulas, light years away, Kirk has taken the Endeavor across the Neutral Zone into Romulan space in pursuit of the Bog vessel. Now he must face the consequences of entering Romulan space. The tension builds during an uneasy standoff between the Endeavor and a Romulan Warbird, as the opposing Captain’s sound each other out, but can these sworn enemies find a way to set aside their differences and work together to rescue the Romulan and Federation prisoners on board the Borg ship? Mike Johnson keeps the plot rattling along at warp speed, as Kirk goes above and beyond the call of duty to save his friend, Spock’s assimilation meanwhile provides some fascinating interacting with the Borg collective, and it all culminates in an epic showdown in space as the Borg sphere nears its objective. 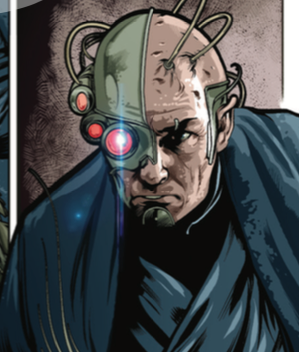 The Borg have made a dramatic impact in this series. Their fixation on finding Neo’s ship, the Narada, because it also inexplicably incorporates Borg technology, has been a key factor in this intricately plotted storyline. Mike Johnson has deftly spliced franchises and alternative timelines with ease to explain exactly how and why the Borg are making their presence felt, STTNG’s big bad have been great foils for Kirk and the Endeavor, the supplementation of the Captain Terrell / Borg as a Locutus style spokesperson has also proved inspired , and the way the Borg have been so cleverly incorporated into the new timeline established by the current rebooted Star Trek movie franchise actually makes them seem like a genuine threat again.

The art and colors by Tony Shasteen really shine in this issue. We are treated to so gorgeous scenes in space, with the Borg sphere looming over Romulas, a Warbird de-cloaking in front of the Endeavor, and a spectacular battle with the Borg sphere that is simply breathtaking in its depiction of this titanic conflict at the heart of the Romulan Empire. Perhaps most impressively realized though is Spock’s assimilation, where his hybrid DNA curtails his conversion, enabling him to interact with the Borg collective via a kind of dreamscape constructed from his own memories that gives an added edge to the stories final act. 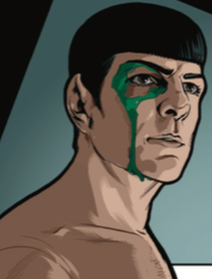 The action-packed battle with the Borg reaches an exciting climax, with scenes intercutting various plot strands, and finally brining everything together for a satisfying resolution. As the issue draws to a close, there is a sense of a new era dawning, hints about what the future might hold between the Federation and the Romulans, and there’s even an unexpected departure as well.

Star Trek Boldly Go #4 rounds off this exceptional first story arc for IDW’s new flaghship Star Trek series. The coda for this issue resonates powerfully with the Borg’s first appearance in the Star Trek The Next Generation episode Q Who?, which also featured a similar sense of victory and unease at its conclusion. Mike Johnson and Tony Shasteen continue their stellar work on Star Trek with this series, it’s bold, inventive, visually impressive, and I look forward to seeing were Kirk and his crews adventures take them next.