Tim Seeley really has a firm grasp on Dick Grayson as a character; he knows what makes him tick, not as Robin or Nightwing or Batman but as Dick Grayson, a man on his own, fighting his own battles as part of a covert unit. This is a Dick Grayson we have not seen before, perhaps we have glimpsed flashes of this man but now we see him as a complete entity and this Dick Grayson is pretty darn impressive. Seeley builds Grayson from the ground up, there are parts of his previous personas in here but Seeley presents them as nuances of a completely new character, even Dick’s relationship with Bruce has taken on yet another role in his life, still a mentor yet now somehow more of a friend. Again it’s the nuances that define and clarify the bigger picture.

This issue begins at the St Hadrian’s Girls College where Helena is a part-time crossbow instructor. Seeley does a superb job of building on the relationship between Dick and Helena; there is a strong foundation of trust in certain areas yet there is a distinct sense that each one is protecting their own best interests particularly where Spyral is concerned, which creates some tension between the two. Seeley digs a bit deeper into the chemistry shared by these agents and gives us some insight into some potential future conflicts that may arise down the road.

Early in the issue Hood, or agent 24, also an operative of Spyral shows up and provides the catalyst for a good bit of the action. It seems Hood was on assignment tracking black market Meta bio-weapons when his path crosses with Dick and Helena’s in the small cheese producing burg of Farmington, Leicestershire. Hardly known as a mecca of illegal bio-weapons, this sleepy little town figures prominently in our tale of international espionage. Also making an appearance in this issue is Midnighter of Stormwatch fame, the black clad brawler is more than slightly perturbed by the outcome of his last meeting with Dick Grayson and vows to the Gardener while at the God Garden that the next one will have a totally different result which does not bode well for Dick.

The majority of the issue is spent with Dick and Helena on assignment; Seeley brings an ample amount of humor to the story especially through the banter between these two longtime associates. There is a level of light-heartedness that permeates even the direst of situations; Dick is as quick with a quip as he is with his fists but he encounters an even faster adversary in Dr. Ashemore. Along the way they also uncover a hidden stash of World War II uniforms belonging to espionage agents from A.R.G.U.S., Checkmate and Ghost Dragons, the plot thickens. 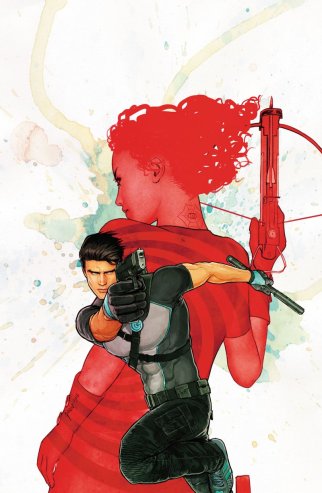 This is an overall really strong issue; there are scenes of exciting action as well as lots of important exposition referring to future events; however the most engaging element for me is the amount of heart and humanity Seeley and King bring to these characters. Some of the strongest examples of this are the scenes between Batman (Mr. Malone) and Dick (Bird Watcher) as they speak to one another via radio transmissions using their clever code names. Seeley uses one of these scenes to particularly effective result in showing us the more human and intimate side of this student/teacher, father/son paradigm that exists between Bruce and his former ward. It’s really good stuff and shows us that there is still a deep bond between these two larger than life personalities.

Visually, Mikel Janin super clean, highly detailed style is a perfect fit for this book. His meticulous attention to detail, realistically accurate rendering of anatomy and extensively expressive facial work add a cinematic feel to his dynamic staging and energetic storytelling. Janin makes extremely effective use of panel placement allowing the pace of the narrative to taken on an even more kinetic vibe. He is without a doubt one of the most under rated artists working today, take a look at his resume from his electrifying covers, especially at DC, to his incredible work on Justice League Dark, he is a consummate creator and an artist in the truest sense of the word. He is one of those guys that if I see his name on a book I pick it up and I am ultimately and always glad I did.

Grayson is a book firmly rooted in the Batman Universe yet existing singularly and entirely in its own corner of that universe. All the things we love about Batman are here but to varying degrees; Grayson is not dark and brooding however there are moments of that woven into the lush tapestry that make up this multi-facetted book. If you are a Batman fan I shouldn’t have to tell you to pick this up, you should already be reading it! But if for some reason you were reluctant to give Grayson a try I suggest you remedy that situation as soon as possible. Grayson has the feel of a Marvel book like Captain America or Secret Avengers with the complexity of DC thrown in for added depth and dimension. This is sure to be a hit and a kick and a punch… you see where I ‘m going with this. (4/5)