The latest issue of All New Ghost Rider not only brings an end to the Engines of Vengeance story arc but sadly it is also the final issue to be penciled by the dynamic and innovative, Tradd Moore. Moore is leaving to focus on his incredible (and incredibly violent) creator owned Luther Strode series with writer/ co-creator Justin Jordan. This is a crushing blow for the fledgling Ghost Rider series because many readers were drawn to the book on the strength of Moore’s imaginative visuals. That’s not to say that Felipe Smith’s story hasn’t been engaging and entertaining, but there is no doubt that Moore’s hyper-kinetic eye candy has been the real star of the book thus far; from his stylized re-imagining of the titular character to the heavily graffiti influenced look of the book overall, Moore has left some extremely huge shoes to fill. 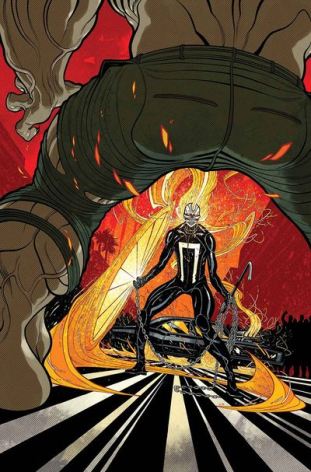 This issue sees Robbie Reyes’ already at risk neighborhood literally in flames. The scourge of a new drug has left a deep scar across the barrio streets and taken down many of the users. Gang war has erupted casting Ghost Rider and the sinister; drug addled Mr. Hyde as the hero and villain, respectively. This is ultimately a story of two brothers and the trials one sibling will endure to protect his younger, weaker kin. Robbie Reyes has unmistakably put his life on the line for his wheelchair bound brother however; a power beyond his comprehension has given it back to him in the name of vengeance. That has been the main point of this introductory arc, to re-establish a status quo concerning the Ghost Rider mythology within the Marvel Universe and as far as that goes, Smith does a first rate job. His story is engrossing and full of believable characters with genuine voices and fully actualized personalities. This issue provides a satisfying payoff to some fine set-up work done in the preceding issues. The pace is energetic providing ample time to get to know these new characters while leaving plenty of facets unexplored for future arcs.

The action in this issue takes center stage particularly in one very tense scene involving a school bus full of children, one of them being Robbie’s little brother, driving straight down the middle of a raging gangland style shoot-out between warring factions. The automatic gunfire is fast, furious and often fatal as the unfortunate bus driver and horrified students careen out of control amidst a hail of bullets. Smith and Moore work in perfect collaboration to bring this pulse pounding scene vividly to life. The flowing line work and dynamic staging bring a sense of cinematic excitement to the pages. This scene is one of my absolute favorites of the entire run thus far; everything works so well together including Val Staples vivacious colors. Staples brings an electricity to Moore’s already buzzing imagery with a palette of bold pulsating pigments.

All New Ghost Rider has been a 100 mph plus thrill ride thus far and I hope that Tradd Moore’s departure is not the end but a new beginning for this cutting-edge re-boot. I believe Felipe Smith has the chops to soldier on and build a readership if given the chance. I know I am going to stick around to see what the future holds for Robbie Reyes and his little Brother as well as to see what Smith has in store for us in Ghost Rider’s rogue’s gallery. Engines of Vengeance proved that this Rider is just as formidable on four wheels as Johnny Blaze and company were on two. (4/5)