Jason Aaron follows the Nick Fury-centric, flash-back filled hiatus of issue #5 with a return to the events of the present as well as seamlessly picking up the previous tempo and dropping us back into the action at a dead run. Last issue Aaron and Deodato turned their substantial combined talents to the task of examining Nick Fury’s illustrious albeit checkered past, the result was an engrossing exploration of one of Marvel’s oldest and most iconic characters. This time around we are reunited with the sinister Dr. Midas, his equally cruel and sadistic daughter Oubliette, The Exterminatrix and the seemingly ubiquitous and enigmatic The Orb. This trio of mysterious malefactors is the closest Aaron has come thus far in giving us a principal antagonist, or in this case three of them. However, with two issues remaining in this event I would not bank on them being the brains behind the Watcher’s murder or even being responsible for pulling the trigger. It is far more likely that the entire Dr. Midas connection is little more than a red herring Aaron has made shrewd use of to divert our attention away from the actual culprit or culprits.

This issue is jammed full of vital exposition that sheds light upon Fury’s reasons for calling together such a diverse group of individuals, as well his definitive designs for them. The speculation that this could be Fury’s final story in continuity is also lent some very significant credence by the events of this issue. In fact several rather game changing outcomes hang in the balance of Original Sin, although Marvel’s own solicitations and gun jumping press releases have ruined at least one huge result involving a certain star spangled shield wielding Avenger, let’s hope that was the last cat to escape the proverbial bag. Aaron does such a fantastic job of presenting Fury as a man who has all but out-lived his post and purpose; the grizzled old super spy has lost the help of the Infinity Formula and its life extending benefits leaving him a shadow of the exuberantly vital, villain thwarting, planet hopping agent he once was, not so very long ago. This is a man struggling to finish one final task and go out with the dignity and respect befitting such a hero, Aaron expertly shows us both sides of the coin that is Nicholas Joseph Fury, benevolent and abrasive at once.

This issue is heavy on the dialogue; fortunately Jason Aaron handles the task with precision and proficiency. His characterizations are spot on giving each individual character his own distinct voice. This is no small accomplishment when dealing with a cast of this considerable size. The action, while not being the focal point of this issue, is as dynamic and electrifying as we have come to expect from this series. The return of Midas definitely helps dial up the excitement as do the scenes featuring the Avengers facing a squad of Fury LMDs. This is the kind of stuff Mike Deodato excels at and an awesome way to close out this issue, leaving us exhausted yet wanting more. 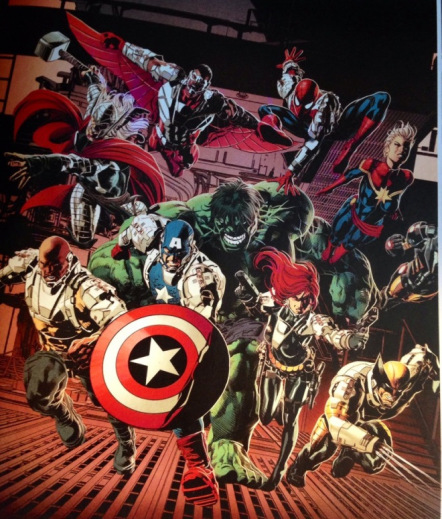 Visually, Deodato does what he does best, blows minds utterly and completely. This guy is the reason it takes me over an hour and a half to read each issue of Original Sin; I have to digest every line, experience each tiny detail and explore every lush shadow. His work goes beyond what’s on the page; he takes you to another plane of storytelling and allows you to absorb the tonal quality on a molecular level. This is the kind of intensity that Deodato brings to his work and has come to define this event; along with Frank Martin’s visceral coloring, this creative team has remained consistently in the upper echelon of sequential storytelling since the introduction of Original Sin.

Original Sin has been a refreshing and inventive new take on the event book. Jason Aaron, Mike Deodato and Frank Martin have crafted a classic noir tinged murder mystery that harkens back to the dime store pulp novels of yesteryear while forging a path that leads directly into the future of comic books. It’s a complex, poignant tale, entertaining and engrossing with enough tried and true super hero tropes to keep the True Believer in all of us happy while embracing a deeper intellectual slant that only serves to deepen our exploration of these characters that mean so much to us. If you are not reading Original Sin, you should be. ‘Nuff said. (4/5)