Captain Ultimate returns! After a break of several months, the mustachioed muscleman returns in a new adventure from Bailey and Esposito and Monkeybrain Comics.

This is a good introduction story, even though they’re five issues in to the run. It’s a one-shot, an inclusive story that begins and ends in one issue. This story is nice because of that. It’s a chance for new readers to jump on and get an idea of what Captain Ultimate is all about, then, once they see what a cool comic this is, they can go back and get the origin story and the introduction to the characters. But here we are, in issue 5…a new and I think completely original threat to the comic world…The English Language.

Ok. That’s a bit dramatic. This is no Frederic Wertham-style crucifixion of a genre. This is not a prose piece on texting and abbreviated language usage. (Though that is an issue.) This is the complete animation of a lettering system. Yes gentle readers; this is “Attack of the Alphabet”. (My title, not theirs. Theirs is the much more clever “Trapped in Alphabet Soup.”) It involves a show-and-tell gone awry. It’s the mishandling of another container of mystery comic ooze, the cause of so many powers and woes. Of course, Captain Ultimate shows up to save the day, bashing “W’s” (the letter not the president) and kicking “A’s”. (Also borrowed from the comic, credit where credit is due, that was a good one.)

This is a writer’s story, where the alphabet is the enemy. It’s a writer’s worst nightmare and his daily regime. Fight that alphabet and see what happens. Bailey describes the origin of the “sentient ninja alphabet” as his son Milo, but it holds true in a broader sense as well. What are we battling for as writers? As wordsmiths, does not the advent of the text message (txt msg?) make us cringe and heave a collective sigh of despair? Esposito and Bailey, and Milo as well, have the ultimate hero take this problem on, not with his fists, but as only the mustachioed mentalist could, with a test of whiskered wits. (No cats involved.)

The art continues in excellence, perfect for the slightly silly and often whacky themes. Akkerman has drawn with perfect tone for these books, has framed them in a way that makes them read like a Saturday morning cartoon. (The good ones, from when we were kids, I don’t want to even comment on what’s out there now.) Even though it’s an original concept it makes for a nostalgic read and has me reaching for the sugary goodness of a bowl of Cocoa Puffs or Lucky Charms. Ed Ryzowski’s colors help reinforce that, bright and bold, almost louder than the sugar-buzz in my cereal-laden veins.

If you haven’t read Captain Ultimate yet, now is a good time to get in. It’s a good break from some of the heavier books out there, a way to decompress after a long day in the trenches with zombies and blood-hungry vampires, psychotic robots, alligators…oh…wait a minute, there may be a few robot alligators floating around the Captain Ultimate universe. Watch your step and mind any small pets. 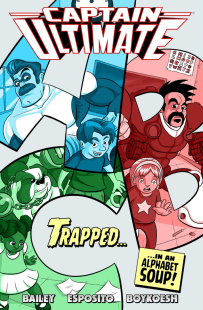