I grew up on The Army of Darkness. Along with Mel Brooks movies, it was one that I could quote at random and was constantly dropping phrases from into conversation. (Needless to say “gimme some sugar baby” didn’t get a lot of positive response…must’ve been a context thing.) Sam Raimi’s third in the Evil Dead trilogy has always been one of my favorites.

I have seen some of the other Ash crossovers, and liked them well enough, though very often it becomes difficult to keep up on a book that is not usually stocked by smaller stores. It’s written for a select audience. I still meet people who have never seen the film, arguably the most popular and mainstream of the three.

That being said, this book is fantastic. Shannon Eric Denton (Lone Ranger Annual, Deadpool) has captured the feel of AOD to a tee. Ash’s dialogue reads like Raimi’s original and sounds like Bruce Campbell is reciting it with dulcet tones in your ear. It’s not a small feat either. You can’t just write a self-obsessed male chauvinist and expect it to fly. There is a cadence you must follow, a code that has been written into the series by its creator for Ash as a character and a man. He does what is best for the people with the perfect amount of grumbling. He is not afraid to call someone a “nancy-boy” if they are behaving in such a way. He uses all of those disheartening epitaphs that your favorite uncle did and gets none of the guff from your aunt.

It begins with Ash losing his soul to three witches who then escape through time. (Super NES game concept!) He drinks the offered potion and follows them one at a time through ancient Egypt, the pirate infested waters off the Barbary Coast, and into the Old West. He wields his “boom stick” with complete and utter abandon, and shows no qualms chain-sawing his way through the hordes of lost souls he encounters. Typically Ash, his rewards are almost always snatched away from him at the last second.

The book is completed with art by Nacho Tenorio (Dark Shadows). It proves the genius of Raimi that it takes two great talents to complete what he did in the film. (Not to gloss over performances by the ever-popular Bruce Campbell.) Tenorio’s use of paneling and placement makes this feel like a Raimi venture. There are some places specifically, like one where we see a close-up of Ash getting a fist in the mush, that I thought, “…This is the sequel to Army of Darkness…” He has captured Campbell’s features, and those of the Raimi-inspired witches and undead, perfectly.

This isn’t a sequel; let’s get that straight. This is the film that could have taken place had Ash not gone back to housewares at the end of AOD. Had he been trapped in that medieval world, this is a very convincing story in the series. And who really doesn’t want to read more about Ash? So shop smart…pick up Ash and the Army of Darkness.

Click Image to Purchase “Ash & the Army of Darkness” Annual #1 From Amazon.com: 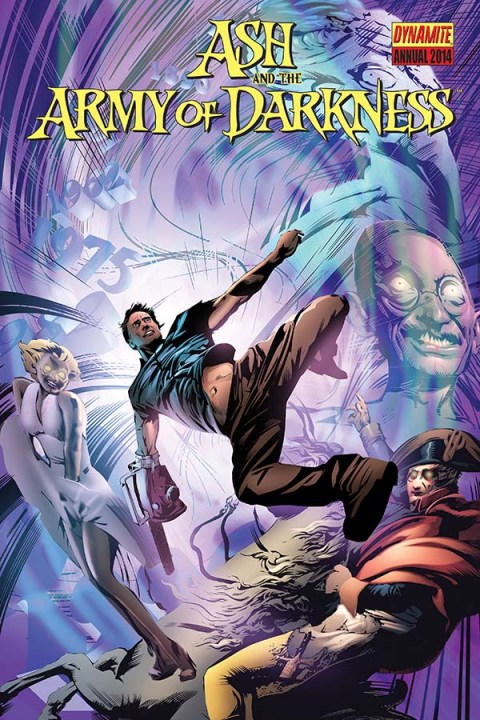