Curt Pires is the kind of writer who likes to keep you guessing. Upon opening the first issue of Mayday from Black Mask Studios, you would never guess that enough could happen in 44 pages that by the end of issue two he felt the need for some editorial disclaimer. 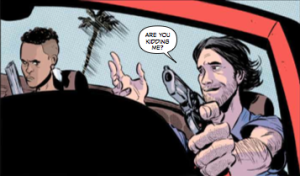 Mayday #2 brings back the anti-hero introduced in issue one, the super rich and morally corrupt Terrance Gattica. Movie star, playboy, addict, Gattica is nearing the end of his rope, clinging by fingernails it seems, when he witnesses a murder in the first issue. The guy next to him in the bathroom stall gets pumped full of lead by two mask-wearing assailants, and Gattica is left on the toilet full of questions and a nose full of recently snorted white powder. Also introduced is Kleio, a recent resident to Los Angeles, and one who spends more than her share of time partying. She has a near miss with a speeding Gattica, who then stops by the bar she works at for a drink. Two more mask-wearing men arrive and kill the bartender. Kleio and Terrance form an unlikely team to take them both out.

At the other end of the spectrum is Benicio Del Cocaine, former actor and deranged psychopath. (Or is he?) He has found “them” and has decided that “they” need some help entering our world. So he kills people, enslaves people, wears a spacesuit with no apparent NASA training, all of the things you’d expect a crazy-rich crazy person to do.

That, and a whole lot more, was all in issue one.

Granted, a second issue is always a good time to push the story forward, since the exposition and world building usually monopolize a lot of the first. Chris Pires (Pop, Theremin) delivers here. The story rockets forward, bringing Gattica and Kleio together, making them the sort of “no one else can do it so we might as well” that we love to see. They’re pretty much the most unprepared vigilantes ever. Kleio is a bartender and Terrance drinks and snorts stuff and used to act.

There are a few little nuggets near the beginning that start to bring the story together, and we see more of Del Cocaine’s break with reality, or perhaps his fine-tuning to the “real” reality. Both of the main storylines are intricate and slightly mirror each other. 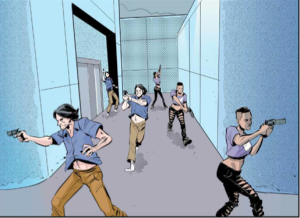 Christopher Peterson’s (Grindhouse) style works for the L.A. setting and feel of the book, and he makes great use of the setting to help tell the story.  Panels like the one on the right are great because they show the kind of thing that would take three or four and throw it all into one.  Pete Toms’ colors are toned down a bit, so that they don’t look like the glossies you see from most of the big two books. I like it, it’s visually jarring to see the glare from the sun or the overhead lights while you’re reading, and flat, bold colors tend to magnify that. Peterson also captures the creepy weirdness that Del Cocaine is up to in a way that makes you feel a little weird yourself. It works perfectly.

As Pires says in the final pages of the book “it’s only issue two, give it some time”.   Mayday #2 leaves you hanging and I cannot imagine what Pires has in store for us next month. That’s exactly what I want from the stories I read.